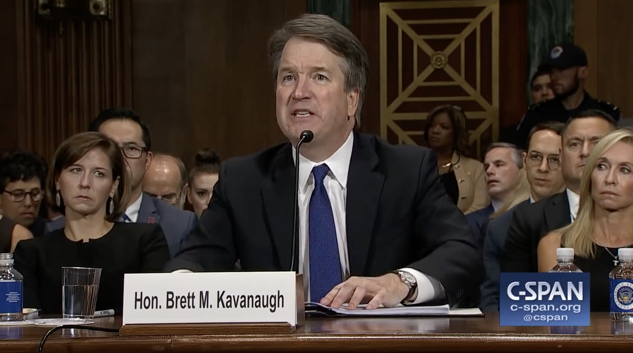 Supreme Court nominee Brett Kavanaugh is a petulant liar -- about matters large and small -- and he often tells his lies under oath. During his confirmation hearings with Senate Judiciary Committee, Kavanaugh’s falsehoods have run the gauntlet from repeatedly lying that Christine Blasey Ford’s account of being sexually assaulted by him has been “refuted” by witnesses, to lying about his behavior in high school and college, to repeatedly lying about the policies he worked on in the Bush administration. Kavanaugh is such a brazen liar that many of his false claims have been entirely refuted by reporting:

Here are some of Kavanaugh’s lies:

Kavanaugh repeatedly claimed Ford’s accusation has been “refuted” by others who she said attended the party -- even though the other attendees have said no such thing. Kavanaugh seized on the word “refuted” when responding to Ford’s report, claiming in five instances that the three people who Ford says were at the party when Kavanaugh sexually assaulted her had “refuted” her account. That’s an obvious misrepresentation of what those people have said. They have actually all said that they don’t recall the party in question -- a major difference from saying something didn’t happen. And Ford’s friend Leland Keyser has said that although she doesn’t remember the party in question, she believes Ford is telling the truth.

Kavanaugh attempted to fabricate an alibi by suggesting he did not drink on weekdays and was out of town almost every weekend night of the summer of 1982. Kavanaugh claimed that the incident Ford described “presumably happened on a weekend” and suggested that he and his friends didn’t drink during the week because of their jobs while adding he was “out of town almost every weekend night before football training camp started in late August.” In doing so, Kavanaugh attempted to falsely imply that he did not attend the type of get-together that Ford described. Kavanaugh’s lie is readily apparent in the calendars he provided the committee and a contradictory statement he made acknowledging “the calendars show a few weekday gatherings at friends’ houses after a workout or just to meet up and have some beers.” In particular, great attention has focused on his July 1 calendar entry -- a Thursday -- that showed he was having “[brew]skis” with some of the people Ford said were at the party.

Kavanaugh said he had no connection to Yale University prior to attending undergrad and law school there, but he was a legacy admittee. While denying that he was a heavy drinker in college who drank to the point of blacking out, Kavanagh said, “I got into Yale Law School -- that’s the number one law school in the country. I had no connections there; I got in there by busting my tail at college.” In fact, Kavanaugh’s grandfather Everett Edward Kavanaugh attended Yale, making Kavanaugh a legacy student.

Kavanaugh denied every blacking out from drinking and downplayed his alcohol consumption as a young man, but numerous Yale classmates say he was a belligerent drunk. Kavanaugh became angered under questioning from Sen. Amy Klobuchar (D-MN) after she asked him if he ever blacked out from excessive drinking. In response, Kavanaugh pressed Klobuchar if she had ever blacked out and claimed that he doesn’t have a drinking problem. The New York Times reported that “nearly a dozen” of Kavanaugh’s classmates “said they recalled his indulging in heavy drinking, with some characterizing it as outside the norms of college life.” His freshman roommate James Roche said Kavanaugh was “frequently unusually drunk” and would become “belligerent and mean,” while classmate Charles “Chad” Ludington said Kavanaugh was “a frequent drinker, and a heavy drinker.” Classmate Elizabeth Swisher called Kavanaugh’s claim he never blacked out “a lie” based on her observation of his behavior at the time. Classmate Lynne Brookes told CNN that she and her former classmates were texting each other during the hearing that Kavanaugh was lying about his college drinking habits.

Kavanaugh said he didn’t live close to Columbia Country Club, but he did. Ford testified that the assault occurred at a house close to Columbia Country Club, where both her family and Kavanaugh’s family were members. During his opening statement, Kavanaugh said, “In her letter to Sen. Feinstein (D-CA), she said that there were four other people at the house, but none of those people, nor I, lived near Columbia Country Club.” But Kavanaugh did live close to the club, according to a map used during the hearing. His house was approximately 3.5 miles from the club. In general, all of the individuals in question lived in the suburban Maryland area surrounding the club.

Kavanaugh lied about him and his friends’ juvenile yearbook joke targeting female acquaintance. Sen. Sheldon Whitehouse (D-RI) questioned Kavanaugh about the text he included on his yearbook page that read “Renate Alumnius,” which refers to Renate Dolphin, an attendee of a local all-girls school. Other references to Dolphin in Kavanaugh’s yearbook make it clear that she was the target of a joke that implied she had had sexual relations with Kavanaugh and his friends. Under questioning, Kavanaugh played off the reference as merely an attempt at “affection” among he and his friends, and blamed the media “circus” for the term being interpreted as relating to sex, which it clearly was. Dolphin, who had signed a letter of support for Kavanaugh, became aware of the yearbook references and told The New York Times, “I can't begin to comprehend what goes through the minds of 17-year-old boys who write such things, but the insinuation is horrible, hurtful and simply untrue. I pray their daughters are never treated this way.”

Kavanaugh said the “devil’s triangle” reference in his yearbook refers to a drinking game (that no one has ever heard of). Kavanaugh told Whitehouse that “devil’s triangle” was a drinking game played with three glasses and quarters. But the term is commonly used to refer to a sex act involving two men and a woman. Pete Davis, who attended high school in Washington, D.C., told Current Affairs, “Every guy who went to my D.C.-area high school knows what ‘devil’s triangle’ means. I’m sure Brett Kavanaugh knows what it means, too.”

Kavanaugh attempted to explain that his membership and title in the “Beach Week Ralph Club, Biggest Contributor” was related to his aversion to spicy food. Asked by Whitehouse about “ralphing,” Kavanaugh said it could be a reference to alcohol-related vomiting, but then went on a long explanation of his famously “weak stomach,” saying, “The last time I was here, you asked me about having ketchup on spaghetti. … I got a weak stomach, whether it’s with beer or spicy food or anything.” Whitehouse asked a follow-up question, “So the vomiting that you reference in the Ralph Club reference related to the consumption of alcohol?” Kavanaugh didn’t answer -- instead he listed his academic achievements in high school.

Kavanaugh mischaracterized a memoir about teenage alcoholism written by Judge. Judge wrote a memoir documenting his alcoholism and antisocial behavior as a young man. In the book, Judge mentions a character named “Bart O’Kavanaugh” who passes out in a car from drinking. Kavanaugh told Sen. Patrick Leahy (D-VT) during the hearing that Judge’s book is “fictionalized.” The title page of the book says, “This book is based on actual experiences.” During the questioning, Kavanaugh refused to say whether he was the “Bart O’Kavanaugh” mentioned in Judge’s book, saying, “You’d have to ask him.” On October 2, The New York Times reported that Kavanaugh wrote a letter in 1983 that characterized he and his friends as “loud, obnoxious drunks” that he signed with the name “Bart,” which The Times explained was Kavanaugh’s nickname at Georgetown Prep.

Kavanaugh denied under oath that he had watched Ford’s testimony, but The Wall Street Journal reported that he did just that. Ford spoke before Kavanaugh at the hearing. When Kavanaugh was asked whether he watched Ford’s testimony, he said, “I did not. I planned to, but I did not, as I was preparing mine.” But a judiciary committee aide told The Wall Street Journal that Kavanaugh was watching “from a monitor in another room in the Dirksen Senate Building.” WSJ uncritically repeated Kavanaugh’s statement from the hearing in an update to its initial report.

Kavanaugh said that he first became aware of Deborah Ramirez’s report that he exposed himself to her in college when it was published in the press, but that isn’t true. While being questioned by Sen. Orrin Hatch (R-UT), Kavanaugh said that he first learned that Ramirez said he exposed his penis to her when they both attended Yale “in the last -- in the period since then, in the New Yorker story.” But according to NBC News, “In the days leading up to a public allegation that Supreme Court nominee Brett Kavanaugh exposed himself to a college classmate, the judge and his team were communicating behind the scenes with friends to refute the claim, according to text messages obtained by NBC News.”

Kavanaugh either lied about being a virgin for “many years” after high school to Fox News, or lied to a Yale classmate that he was not a virgin. Kavanaugh raised eyebrows with his claim during a Fox News interview when he said, “I did not have sexual intercourse or anything close to sexual intercourse in high school or for many years thereafter.” Beyond the fact that Kavanaugh has been reported for sexual misconduct and assault, not rape, a former Yale classmate disputed Kavanaugh’s claim on the basis of things Kavanaugh himself said when they were in college.

Kavanaugh acted like he never heard of the law firm Kasowitz Benson Torres where his good friend works as a partner. During the first round of confirmation hearings, Kavanaugh was caught off guard when Sen. Kamala Harris (D-CA) asked if he had discussed special counsel Robert Mueller’s investigation with anyone at Kasowitz Benson Torres, which was founded by Trump’s personal lawyer. Kavanaugh reacted to the question with befuddlement. But Kasowitz Benson Torres employs Ed McNally, a close friend who worked at the Bush White House with Kavanaugh, and who was also part of a testimonial put out by the Republican National Committee in favor of Kavanaugh’s nomination.

Kavanaugh said documents stolen from Democrats that he received from a GOP operative didn’t raise any red flags with him, even though they were marked for internal use. Kavanaugh’s receipt of emails stolen from Democratic offices during a time when he worked on judicial confirmations for the Bush administration has plagued him for years. Kavanaugh has always denied that he had any reason to believe the emails he received were stolen, but Leahy called out his claim during the initial confirmation hearings. Leahy presented Kavanaugh with emails clearly marked for internal use, including one with the subject line “spying.” Kavanaugh repeated his denial, leading Leahy to say, “Judge, I was born at night, but not last night.”

Kavanaugh denied knowing that disgraced Judge Alex Kozinski oversaw a work environment hostile to women, leaving other people who clerked for Kozinski scratching their heads. Kavanaugh clerked for Kozinski, who abruptly resigned in 2017 when facing multiple reports of sexual misconduct. Kozinski had previously been criticized in 2008 for operating “a publicly accessible website featuring sexually explicit photos and videos,” and for running a sexually explicit email list. Sen. Mazie Hirono (D-HI) questioned Kavanaugh about his relationship to the disgraced judge, and he denied knowing about any impropriety Kozinski was involved in, including denying knowledge of Kozinski’s widely known email list even though its existence has been public for 10 years. Former Kozinski clerk Heidi Bond wrote for Slate: “Having clerked in his chambers, I do not know how it would be possible to forget something as pervasive as Kozinski's famously sexual sense of humor or his gag list.”