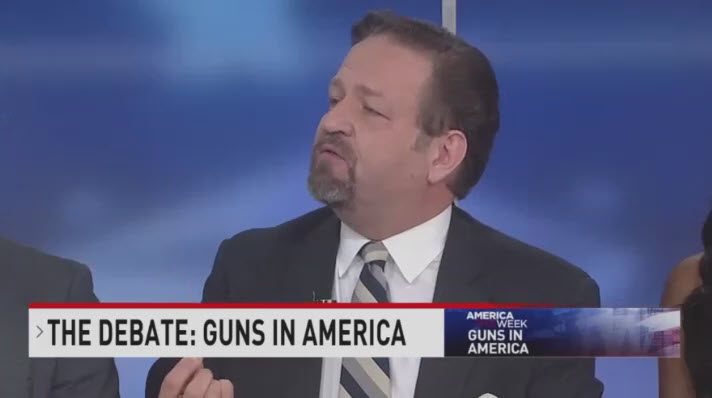 The Anti-Defamation League has repeatedly condemned pundits who reference the Holocaust during debates over gun regulation, saying in one 2017 statement:

The national debate over gun violence prevention is a divisive issue with many legitimate policy arguments.  But the notion that Jews could have saved themselves from the Nazi onslaught but for gun regulations in Nazi Germany is not one of them. This argument is historically inaccurate and deeply offensive, especially to Holocaust survivors and their families.  We have long asserted that it is absolutely wrong to bring the Holocaust into this debate where it simply does not belong.

Gorka’s comment came during the August 6 edition of America This Week, a weekly hour-long program hosted by former Fox News host Eric Bolling which streams on the websites of Sinclair-controlled local news stations. During a panel discussion about the prior week’s public massacres, Gorka said that the “Second Amendment isn’t about hunting” before saying that “there’s a reason that in Venezuela five years ago they took away private gun ownership” and that “Hitler did it” as well. Gorka said that his claims are not theories, but rather, “It’s history”:

In 2015, following a resurgence of claims linking the Holocaust to current debates about gun regulation after a mass shooting at an Oregon community college, ADL National Director Jonathan Green­blatt wrote that “ADL has responded to this talking point countless times since it first surfaced in 2013, when there were a slew of Holocaust and Nazi analogies as part of the gun debate.” Greenblatt then made several points debunking the claim, including that it is “mind-bending to suggest that personal firearms in the hands of the small number of Germany's Jews (about 214,000 remaining in Germany in 1938) could have stopped the totalitarian onslaught of Nazi Germany when the armies of Poland, France, Belgium and numerous other countries were overwhelmed by the Third Reich.”

PolitiFact has similarly rated the claim that firearm regulation in Nazi Germany enabled the Holocaust as false, explaining that “strict German gun regulation was in place before Hitler rose to power and he later oversaw gun laws that loosened many firearm restrictions” and that denying “guns specifically to Jews” was a “trivial factor” in the Holocaust. As Alex Seitz-Wald explained in 2013 at Salon, gun laws in Germany were unfairly applied to persecute Jews, but that is an indictment of Hitler’s anti-Semitism, not the laws themselves (emphasis original):

The law did prohibit Jews and other persecuted classes from owning guns, but this should not be an indictment of gun control in general. Does the fact that Nazis forced Jews into horrendous ghettos indict urban planning? Should we eliminate all police officers because the Nazis used police officers to oppress and kill the Jews? What about public works -- Hitler loved public works projects? Of course not. These are merely implements that can be used for good or ill, much as gun advocates like to argue about guns themselves.

Gorka’s Hitler claim is not his first questionable statement on gun violence. During a previous Sinclair broadcast devoted to gun violence, Gorka claimed that the “big issue” concerning gun violence in the U.S. is “black African gun crime against black Africans.”

Reached for comment by email, Gorka praised the accuracy of Media Matters transcripts for his Salem radio show, America First, writing, “Thanks for all the free transcripts of my National show AMERICA First you bunch of lying amoral propagandists.”