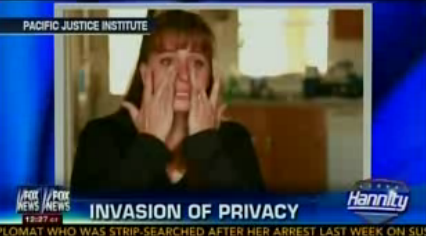 Fox News host Sean Hannity relied on a discredited right-wing organization that fabricated a story about a transgender student harassing her peers in a school restroom, attacking proper facilities access for transgender students as a “violation of privacy.”

The rabidly anti-LGBT Pacific Justice Institute (PJI) gained notoriety earlier this year after it was caught manufacturing a story about a transgender student in Colorado who PJI claimed was harassing other students in her school's bathrooms. That story ended up being entirely fabricated - the school district's Superintendent stated that no instances of actual harassment had been reported. PJI scrambled to save face, claiming that the “harassment” it referenced actually amounted to nothing more than a few parents and students feeling uncomfortable by the mere presence of a transgender student.

PJI's history of lying about the case didn't stop Hannity from promoting the group's work during the December 18 edition of his show, including airing a PJI-produced video featuring testimony from parents and students from the Colorado school who were bothered by the transgender student's existence. Hannity called the video “pretty powerful” and asked if letting transgender students use the bathroom of their choice was a “violation of privacy” :

Many schools have already implemented policies similar to the one in Colorado, and California passed a law this summer granting transgender students proper facility access. Schools that have instituted such policies haven't reported any instances of misconduct and state that they've experienced  “nothing but positive results.”  Experts state that allowing transgender individuals access to facilities that match their gender identity is essential to affirming their identities and removing the stigma all too often attached to trans people.

This isn't the first time Hannity's program has featured fear-stoking arguments against transgender rights. In August, he blasted California's new law, asking, “What do we do with the seven-year-old girl that goes into the locker room and there's the 14-year-old boy naked in the girls' locker room because that's where he chooses to be?” Fox itself has assailed the law repeatedly, with host Bill O'Reilly calling it “the biggest con in the world,” further contributing to the network's transphobia problem. The network's willingness to tout a group that has lied in order to smear transgender students marks a new low.