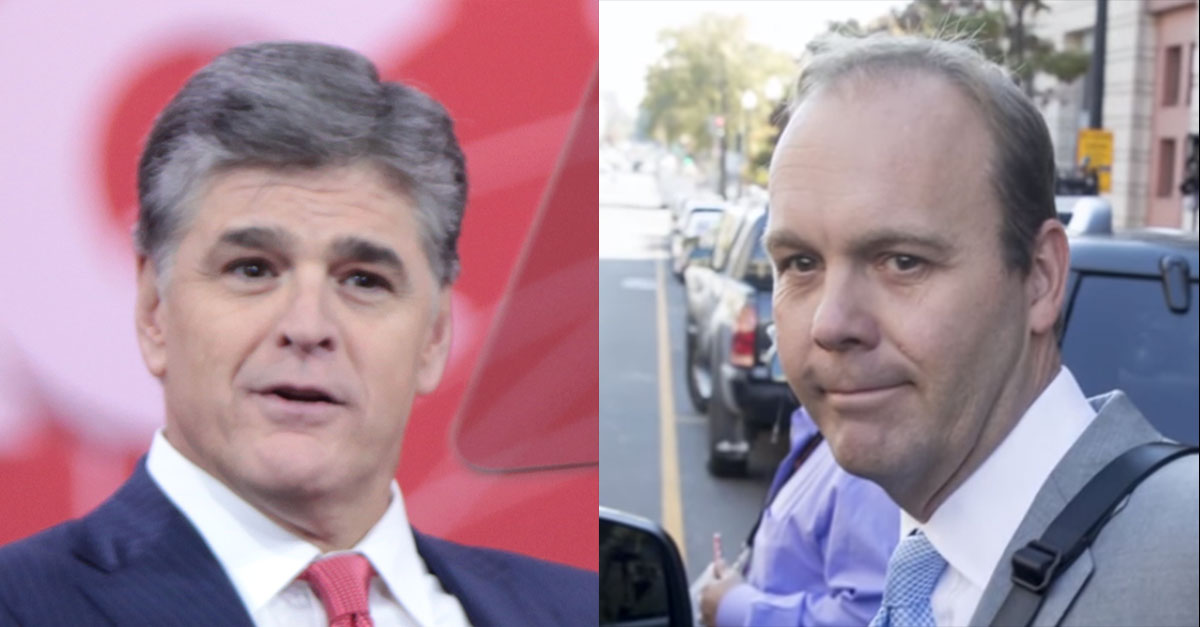 UPDATE (8/2): According to a search of Nexis transcripts of his Fox show, Sean Hannity finally mentioned Rick Gates -- but only after reports surfaced that he may not testify against Paul Manafort.

On the August 1 edition of Hannity, the Fox News host slammed Manafort’s trial and mentioned that in “one more blow for the special counsel, their star witness Rick Gates … may not testify now.” Hannity then pondered what prosecutors “offer[ed]” Gates. The Fox host compared Gates to the organized crime figure Sammy Gravano, who “killed 19 people, doesn’t spend a day in jail because they used him to testify against” John Gotti, who at the time was the head of the Gambino crime family. (In fact, Gravano served five years in prison for racketeering after testifying against Gotti.)

Later in the same program, Trump sycophant Gregg Jarrett referred to Gates as the “snitch who [prosecutors] now realize will be pilloried as a liar and a crook and an embezzler and bribed by the government for leniency.”

Unfortunately for Hannity and Jarrett, prosecutors reportedly said this morning they have “every intention” of calling Gates to testify during Manafort’s trial.

Republican operate Rick Gates is, by any measure, a key figure in special counsel Robert Mueller’s investigation into Russian interference in the 2016 presidential election. Gates was a senior aide in now-President Donald Trump’s campaign, his subsequent transition, and the early days of his presidency, and the longtime deputy of Paul Manafort, the Trump campaign chair whose shady dealings with Russia-linked entities have been a focus of Mueller’s probe. His decision to plead guilty to a single count of lying to the FBI and cooperate with Mueller sent shockwaves through the Trump camp for fear of what he might tell the special counsel (“He saw everything,” one source told Politico). Trump’s associates are right to be uneasy -- Mueller reportedly sought Gates’ cooperation not to firm up the case against Manafort on financial crimes he allegedly committed while Gates was in his employ, but to elucidate the Trump campaign’s communications with Russia.

In the first sign of how Gates is aiding that probe, Mueller revealed on Tuesday that Gates was in regular contact with a former Russian military intelligence officer who allegedly still had ties to that agency. The story rocketed through the media, and for good reason -- as Crooked Media’s Brian Beutler noted, “While Manafort and Gates were running the Trump campaign, in other words, one of their employees was a potential liaison to the Russian hackers who stole emails from the DNC.”

But one regular commentator on the Russia probe has been noticeably silent on the Gates revelations: Sean Hannity. Indeed, Hannity last substantively mentioned Gates on his Fox show on October 30, when he said that Mueller’s indictments of Gates and Manafort have “nothing to do” with “Trump-Russia collusion,” according to a Media Matters review of the Nexis database. While the special counsel filed additional charges against Gates in February, leading to Gates’ subsequent decision to cooperate, Hannity remained mum. His sole reference to Gates during this period came on February 20, when he said that Mueller had announced a “new plea deal with a lawyer tied to Paul Manafort and Rick Gates.”

This is incredibly unusual. Since Mueller was named special counsel last May, Hannity has transformed his Fox News program into a propaganda show dedicated to denouncing what he terms “black-helicopter, tinfoil-hat conspiracy theories about so-called Trump-Russia collusion.” Hardly a show goes by without Hannity scoffing at Mueller’s probe, demanding his resignation or removal, and calling for criminal investigations into the “deep state” conspiracy of senior law enforcement officials that he blames for the “witch hunt.”

The Fox host typically responds to new allegations related to the Mueller probe immediately (at times to comical effect). On Wednesday, for example, Hannity branded as “fake news” a report from earlier that day that Trump’s lawyer had last summer suggested to lawyers for Manafort and former national security adviser Michael Flynn that they might receive pardons from the president, presumably if they refused to cooperate with Mueller.

And Hannity has worked tirelessly to provide his audience with an alternative narrative about the increasing number of Mueller targets to be indicted or plead guilty and cooperate with the probe. In Hannity’s telling, criminal charges against Flynn and Manafort should be dropped because they are the victims of a witch hunt; George Papadopoulos, a former Trump campaign foreign policy adviser who told an Australian diplomat in May 2016 that Russia was in possession of thousands of emails that would damage Clinton’s campaign, is someone Hannity “never heard of” who provides “bar talk” and “four-way hearsay”; the guilty plea of Alex van der Zwann, a lawyer who worked with Gates and Manafort and the son-in-law of a Russian billionaire, shows “no collusion”; and the indictments of various Russian nationals and entities somehow vindicate the Fox host’s Uranium One conspiracy theory.

Hannity is a shill, and because of that, he likely has insight into the Trump team’s Mueller strategy. He regularly advises the president, who watches Hannity’s show. Senior White House aides, Trump’s lawyer, members of Trump’s family, and key Republican congressmen who are engaged in the effort to push back against the Russia probe regularly appear on Hannity’s program to talk about the special counsel’s investigation. If anyone in the right-wing press is aware of how Republicans are trying to forestall a Mueller result that would be devastating to Trump, it is Hannity.

And Hannity isn’t talking about Gates. He has made no effort to either indict Gates’ character and try to destroy his credibility, or to paint him as a victim and set the stage for a possible pardon.

Maybe Hannity is out of the loop on this. Perhaps he just doesn’t realize how damaging Gates’ testimony might be. It’s possible that Hannity has something planned to respond to Gates, and he just hasn’t initiated it yet.

But as time passes, and Gates’ testimony leads Mueller closer and closer to serious misconduct at the heart of the Russia scandal, his silence is becoming deafening.