Conservative commentator Tomi Lahren will join Fox News as a contributor, the channel announced today. The announcement comes over a month after Lahren’s weeklong de facto “audition” on Fox News’ Hannity where she provided commentary at the end of the show that served to complement host Sean Hannity’s swooning coverage of President Donald Trump. Lahren has a long history of making racist, nativist, and misogynistic comments.

Variety: Fox News signed Tomi Lahren as a contributor. Fox News announced on August 30 that “conservative media host Tomi Lahren has joined Fox News in a contributor role,” according to Variety magazine. Lahren will reportedly “have a signature role on the network’s upcoming digital lineup and will also offer political commentary to the network’s opinion programming, primarily ‘Hannity.’” From the August 30 article:

She will make her debut as a contributor on tonight’s edition of “Hannity” at 10 p.m. ET/PT. According to FNC, Lahren will have a signature role on the network’s upcoming digital lineup and will also offer political commentary to the network’s opinion programming, primarily “Hannity.” [Variety, 8/30/17]

During her weeklong “audition” on Fox, Lahren ripped a page from Hannity’s playbook, attacking mainstream media and other Republicans while heaping praise on Trump. During her monologues for “The Final Word” segment of Hannity in July, Lahren attacked media outlets for reporting on President Donald Trump’s Twitter habits, criticized celebrities as having “Trump derangement syndrome” for speaking out against the president, and warned Trump dissidents in the Republican Party to get behind the president’s agenda:

Lahren seems to have auditioned for the Hannity role in mid-July, when she appeared for a weeklong stretch on “The Final Word,” a taped monologue segment at the end of Hannity’s show. Other recent participants include pro-Trump commentators Diamond and Silk and Terrence Williams of YouTube.

Lahren’s “The Final Word” monologues, much like Hannity’s own performances, feature a mix of pro-Trump cheerleading, criticism of his foes, and policy pablum. She attacked the “leftist mainstream media” for “nitpicking” Trump’s habits while ignoring that the “average American is making a comeback under this president.” She criticized the “Hollywood elitist[s]” like Kathy Griffin, Johnny Depp, and Madonna, and their “Trump derangement syndrome.” She also complained that the rest of the Republican Party refuses to get on board and pass the president’s agenda. [Media Matters, 8/30/17]

Lahren has built her career on attacking liberals

Lahren got her start on One America News Network by attacking President Obama for failing to blame “radical Islam” for Chattanooga terror attack. The Guardian reported that after getting rejected for an internship at Glenn Beck’s staunchly conservative news outlet TheBlaze in 2014, she found a welcome home at One America News Network (OANN), a right-wing news network that has become a key peg in Trump’s propaganda mill. Lahren hosted On Point and gained notoriety after admonishing then-President Barack Obama for his “reluctance to blame Muhammad Youssef Abdulazeez’s shootings on a military recruiting centre and navy reserve base in Chattanooga on ‘radical Islam.’” Obama declined to use the term in order to avoid “lump[ing] these murderers into the billion Muslims that exist around the world, including in this country, who are peaceful.” The Guardian’s profile of Lahren noted that she would later be dubbed “white power Barbie” for her inflammatory racial and nativist rhetoric. [The Guardian, 9/23/16; Media Matters, 1/19/17; CNN, 9/29/16]

Lahren then got a job at TheBlaze where she used her platform to berate liberal activists, usually referring to them as “snowflakes.” After leaving OANN, Lahren joined TheBlaze where she often dedicated entire segments to attacking progressive activists, calling them “snowflakes.” In one instance, she offered a number of different definitions for the term “snowflake,” declaring, “If you believe illegal immigrants should be able to get driver's licenses and in-state tuition and Obamacare, you might be a snowflake,” and “If the term ‘White Christmas’ seems racist to you, you might be a snowflake.” Another time, according to The Daily Beast, Lahren directly addressed liberals, saying, “I am your worst nightmare. I don’t care what you label me or how many times you come for me. I am fearless and I’m just getting started.” [TheBlaze, 1/10/17; The Daily Beast, 12/9/16]

Before landing a spot at Fox News, Lahren worked for a pro-Trump super PAC subsidiary

In a tweet that has since been deleted, Lahren wrote, “Meet the new KKK, they call themselves 'Black Lives Matter.'” 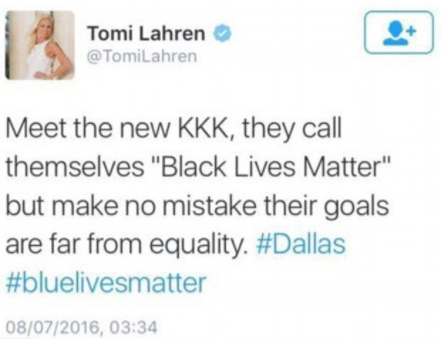 Lahren used “A Day Without Immigrants” to cast undocumented immigrants as violent criminals. Lahren dedicated one of her monologues to criticize “A Day Without Immigrants,” a “combination boycott/strike” that meant to highlight “the contributions of immigrants to U.S. business and culture,” falsely asserting that, “a day without illegal immigrants means a safer America for us all as illegal immigrants are three times as likely to be convicted of murder as members of the general population.” [YouTube, 2/16/17; NPR, 2/16/17; CBS News, 1/27/17]

Lahren: “I, quite frankly, am tired of pressing two.” In 2015, Lahren opened one of her monologues saying, “Let’s talk about immigration because I, quite frankly, am tired of pressing two.” She was referring to the option to press two for Spanish when calling customer service phone numbers and later implied that being an American meant speaking English, an ideal frequently pushed by anti-immigrant nativist groups. In between making these nativist remarks, she attempted to whitewash her anti-immigrant rhetoric, commenting, “Transferring frustration with a broken system into hate for our fellow human beings does not solve the problem.” [YouTube, 10/27/15; Southern Poverty Law Center, 8/27/15]

Are we worried? Is that an honest question? Yes we are worried about the rape-ugees. #GOPDebate

Lahren told Playboy that Europe has experienced “a fundamental transformation” due to its refugee policy. Lahren pointed to Europe’s refugee policy as a justification for Trump’s Muslim ban, saying in an interview with Playboy magazine, “Look at Europe. They’ve said, ‘Bring them all in,’ and look what’s happening there? It’s a fundamental transformation.” [Playboy, 5/2/17]

Lahren frequently diminishes feminism as a form of “victimhood”

Lahren claimed feminists use the obstacles women face as “an excuse to fall short.” Without giving any evidence, Lahren claimed on International Women’s Day that feminist activists cast themselves as victims and feel they “deserve special treatment because [they] have ovaries and menstrual cycles.” She also said, “Yeah, some challenges might be a little greater for some women but let me tell you — it feels a whole hell of a lot better to overcome those challenges than it does to dwell on them, complain about them, or use them as an excuse to fall short.” [TheBlaze, 3/8/17]

Lahren lauded conservative women for “dressing like women” as opposed to liberals who wear pant suits. Speaking at Turning Point USA’s Young Women’s Leadership Summit, Lahren characterized modern feminists as being “all about ‘give me.’ It’s ‘Give me this. Give me this. Pay for my birth control. Pay for my abortions.” She also told her audience, “You notice the difference between a conservative women’s conference and a liberal women’s conference, because you all dress like women.” [YouTube, 6/23/16]