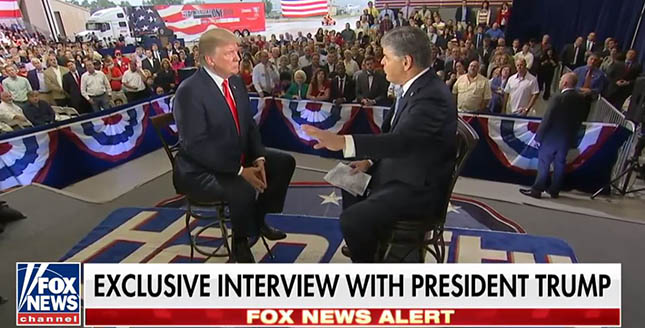 In a perfect marriage of burgeoning authoritarian leader and propagandist, President Donald Trump and Fox News host Sean Hannity lashed out at mainstream journalists who produce critical reporting about the president during an interview tonight before a live audience.

Trump has not given a scheduled national television interview to a mainstream outlet since a disastrous May interview with NBC’s Lester Holt. With the reported support of his aides, who fear he has “lost a step,” the president has instead agreed to interviews with a collection of shills and sycophants at Fox and elsewhere. In those interviews, the hosts throws softballs that give Trump an opportunity to discuss what a great job he is doing and to whine about the “fake news” media that won’t give him proper credit.

Tonight it was Hannity’s turn. The Fox host, perhaps the most fervent Trump supporter on television, is a confidant of the president, who reportedly “often calls Hannity after the Fox News host’s nightly show,” which is one of Trump’s favorites.

The interview was largely a lovefest. Hannity did his best to help the president push his agenda, letting him push obvious lies and make completely incoherent comments without pause. Trump clearly got a kick out of having an interviewer who appreciates him as much as he appreciates himself, closing the interview by telling the Fox host, “You have been so great, and I'm very proud of you.” But at one point, Trump became noticeably angry when discussing journalists who are less sycophantic.

“Media is bad, they are really dishonest people. These are very, very dishonest people in many cases,” Trump said. After briefly acknowledging that this doesn’t apply to all journalists, he continued, “But there's such dishonesty. It's interesting, if I was just watching television, you don't know whether or not -- because you know, you're just watching a report. But when you’re the one being written about, you know if it's good or bad -- and it’s always, they try and make it negative. So the media -- I call it fake media. It is fake. So much fake news.”

At that point, a delighted Hannity chimed in, “Do you agree with that? Fake news?” His audience cheered in response.

This is horrifying but not surprising.

Trump spent his campaign and his tenure in the White House thus far berating and threatening the press, which he has termed the “enemy of the American people.” The often scattered president has been laser-focused on delegitimizing journalists in the eyes of his supporters and raising doubts about the credibility of critical reporting about his administration. Trump claims not only that reporters sometimes get stories wrong, but that they are deliberately lying to the public for their own ends.

Earlier today, the president threatened to use the power of the federal government against NBC News in retaliation for a report he didn’t like, said it was “disgusting the press is able to write whatever it wants to write,” and accused NBC of fabricating sources to damage his administration.

At every step of the way, Trump’s authoritarian campaign against the free press has been cheered on by Hannity, his most loyal sycophant. The Fox host has hated the press for years, but in the age of Trump has become perhaps the most prominent media critic in America, one whose opinions seem to mimic and build on Trump’s own. “The propaganda media is exactly that,” Hannity has explained. “They're out to destroy Trump. That is their main purpose. They want to advance the interests of liberal Democrats and the left. ... They're not journalists.”

This summer, Hannity devoted substantial attention on his Fox broadcast, with an audience of 3 million, to the “destroy Trump media.” According to our analysis, Hannity criticized the press in 55 of 61 monologues from May 15 to September 1. He’s mentioned “fake news” 67 times, claimed that the press has an anti-Trump “double standard” in 14 monologues, and accused them of “colluding” with Hillary Clinton’s 2016 presidential campaign in 10.

But Hannity’s press criticism does not end with harsh words -- the Fox host has repeatedly called on the White House to take action against the press, urging Trump to stop giving press conferences and interviews, ban reporters from the press briefing, and suspend aggressive journalists. For all intents and purposes,Trump has already adopted the Fox host’s proposals on press conferences and interviews, instead preferring to take questions from sycophants like Hannity.

It remains to be seen if Trump will follow through on his threats to target “fake news” outlets for government reprisals. Surely Hannity would be delighted if he did.