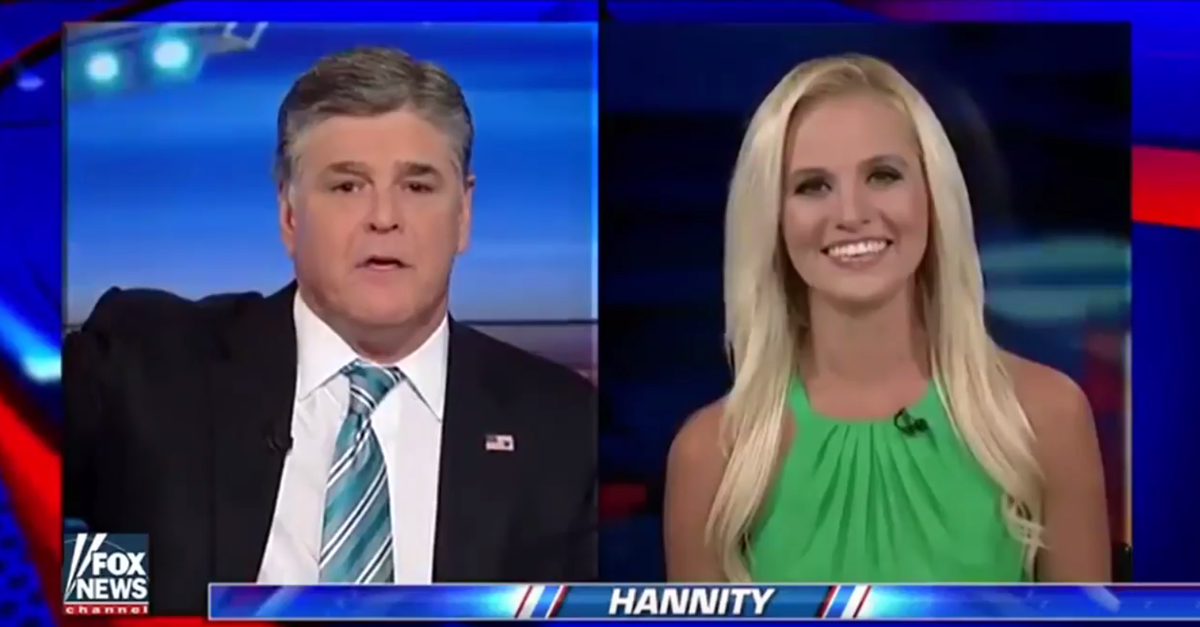 Fox News has hired as its most recent contributor Tomi Lahren, a controversial conservative commentator who was previously a host at the smaller conservative networks TheBlaze and One America News Network before joining a super PAC that supports President Donald Trump in May. But don’t expect to see her joining the panels of the network’s signature news shows, Special Report or Fox News Sunday, or appearing on the network’s daytime programming. Instead, the press release announcing her hire makes clear that she will be quarantined to a very particular portion of the network: She will “offer political commentary to the network’s opinion programming, primarily Hannity.”

The release about Lahren seems to anticipate that Fox’s news staff will be embarrassed by what the network has done, thus requiring a public signal that only the president’s shills will be hosting the newest contributor. The reference to Sean Hannity’s program gives the game away: Fox hired a Trump propagandist to bolster its leading Trump propaganda show.

Hannity has increasingly become an island unto himself, running his program with no sense of journalistic integrity and little apparent oversight or corporate restraint. Night after night, he finds new ways to declare that the president is besieged by powerful, dishonest foes, that the investigations into Trump’s actions are a sham, and that the president’s enemies are criminals.

His isolation came to a head in May, after former Hannity producer Bill Shine resigned as Fox’s co-president following revelations about his reported role in enabling and covering up the extent of the sexual harassment problem at his network. Shortly before Shine's exit, Hannity had tweeted that Shine’s departure would signal “the total end of FNC as we know it”; rumors swirled that he would follow Shine out the door, but he ultimately decided to stay.

With Shine gone, Hannity was completely unleashed, with no one left at the network with the status to rein him in. Later that month, he became the most visible national champion of the vicious Seth Rich conspiracy theory, a claim he believed would debunk the evidence that Russia sought to help Trump with the 2016 presidential election. Hannity continued to push the story even after his network had retracted its reports about it, publicly declaring, “I am not Fox.com or FoxNews.com, I retracted nothing.”

This effort helped isolate Hannity from his colleagues. His insistence on promoting lies drew criticism from his colleagues, with “nearly a dozen reporters, pundits, and hosts” at Fox telling The Daily Beast that Hannity was “embarrassing” the network and questioning why executives were unable to put a stop to it. Last month, Hannity, in turn, portrayed himself as the sole true supporter of the president at the network, calling out Fox anchor Shep Smith in particular.

We’ve seen this pattern of Fox’s “news” staff calling out their “opinion” colleagues before, when open hostilities broke out due to former Fox host Glenn Beck’s violent and racist rhetoric. The network’s reporters skew their story selection to the right and promote conservative talking points, but they don’t like to be too closely linked to the worst vitriol of the evening hosts, even as Fox’s audience and ratings are built around that right-wing brand.

Rather than try to restrain Hannity as his colleagues would prefer, Fox has now expressly hired a contributor to bolster his show.

Lahren seems to have auditioned for the Hannity role in mid-July, when she appeared for a weeklong stretch on “The Final Word,” a taped monologue segment at the end of Hannity’s show. Other recent participants include pro-Trump commentators Diamond and Silk and Terrence Williams of YouTube.

Lahren’s “The Final Word” monologues, much like Hannity’s own performances, feature a mix of pro-Trump cheerleading, criticism of his foes, and policy pablum. She attacked the “leftist mainstream media” for “nitpicking” Trump’s habits while ignoring that the “average American is making a comeback under this president.” She criticized the “Hollywood elitist[s]” like Kathy Griffin, Johnny Depp, and Madonna, and their “Trump derangement syndrome.” She also complained that the rest of the Republican Party refuses to get on board and pass the president’s agenda.

What does that agenda entail? According to Lahren’s inch-deep policy knowledge, we need to:

You can see why Fox is a little bit embarrassed about giving Lahren a job -- and why a shameless pro-Trump shill like Hannity would want to hire her.

Hannity has been out of control for months. At this point, we have to assume it’s by design, that Fox executives appreciate what he’s bringing to the table and are willing to indulge him as he builds his pro-Trump megaphone. The news staff may be ashamed of what Hannity is up to, but at the end of the day, he’s going to get what he wants.