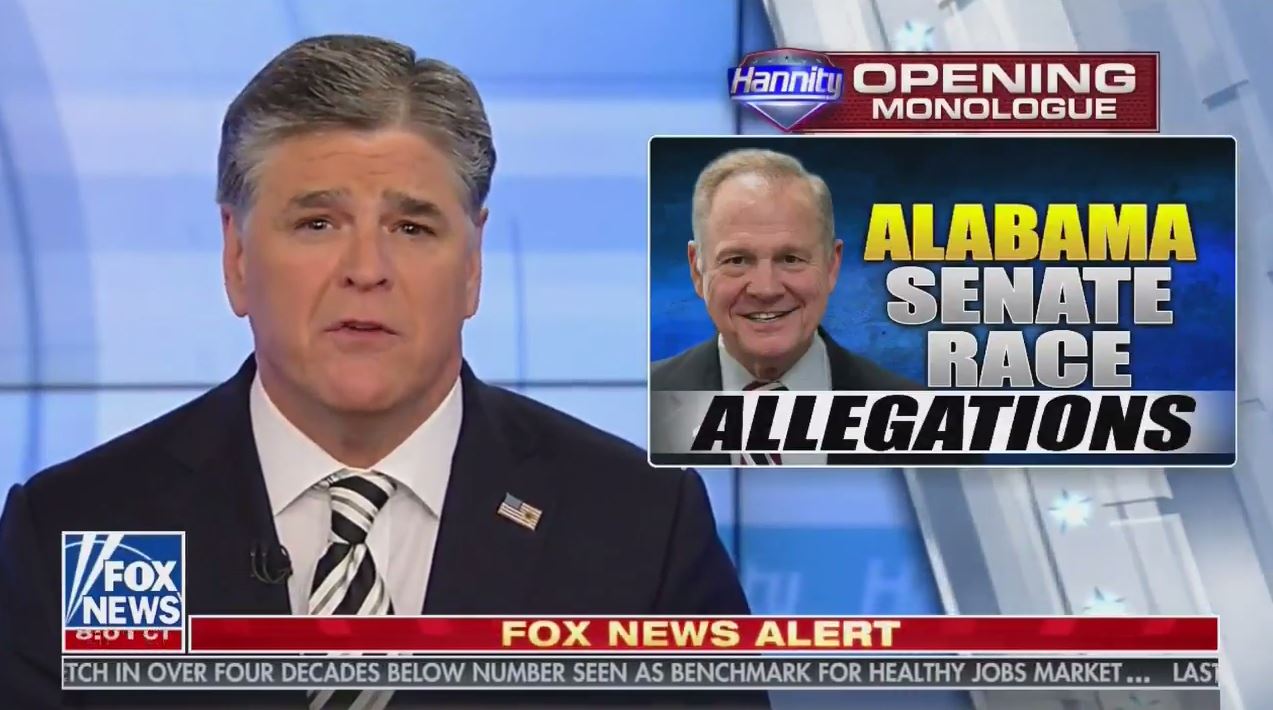 When Republican politicians find themselves in hot water, they know they can count on Fox News host Sean Hannity to give them an opportunity to try to clean up the mess. This afternoon, when Alabama Senate candidate Roy Moore called in to Hannity’s radio show to respond to The Washington Post’s report citing statements from four women that Moore engaged in sexual misconduct when he was in his early 30s and they were between the ages of 14 and 18, Hannity gave Moore as comfortable an environment as one could expect given the accusations. While Hannity did ask the Senate hopeful a list of questions about the specific allegations in the Post’s report, he failed to hold Moore accountable for his answers and inconsistencies, and at one point just simply gave Moore the floor to attack the Post and deny the accusations.

Yesterday the Post reported that Moore allegedly sexually assaulted a 14-year-old and “pursued” three others between the ages of 16 and 18 in the late 1970s. The story was based on on-the-record interviews with the four women and substantial corroborating evidence.

Over the past two days, Hannity, who endorsed Moore’s campaign in September, has alternated between saying that the accusations are disgusting and Moore must leave the race if they are true, and providing his audience with every reason under the sun why they should not believe the story. He and the guests on his radio and television shows have warned that the allegations are “he said, she [said],” suggested that the women are lying, claimed that women in such cases frequently fabricate their stories for money, asserted that the story is “suspicious… because of the source, The Washington Post,” and lashed out at those who have criticized Hannity’s response.

That pattern continued to play out during the interview. While Hannity did provide a bare minimum amount of due diligence by asking Moore to answer specific questions about the allegations in the Post’s report, he failed to hold Moore to account for his answers, allowing him to obfuscate, provide inconsistent answers, and pick up on defenses laid out by Hannity.

At one point during the interview, Moore responded to a question from Hannity by highlighting Hannity’s own defenses of the candidate, saying, “Just like you said, they’re doing it to defeat this Senate campaign.” Later, Hannity opened a question by stating, “a lot of things come up during elections, this is not my first rodeo, Judge.” Hannity continued, “I know a lot of people rush to judgement” and ran off a list of individuals who he felt were wrongly accused, including George Zimmerman, who shot and killed Florida teenager Trayvon Martin in 2012, and Darren Wilson, the police officer who shot and killed Missouri teenager Michael Brown in 2014.

Hannity closed the interview by simply giving Moore a chance to attack the Post and Moore’s accusers, saying to Moore, “What do you want to tell people -- I’ll just give you the microphone -- about how they should view The Washington Post, these people making these charges, and your denial.” Moore responded by claiming that “these charges are politically motivated” and intended to “defuse this just like they defused President Trump’s agenda by bringing up the Russia deal.”