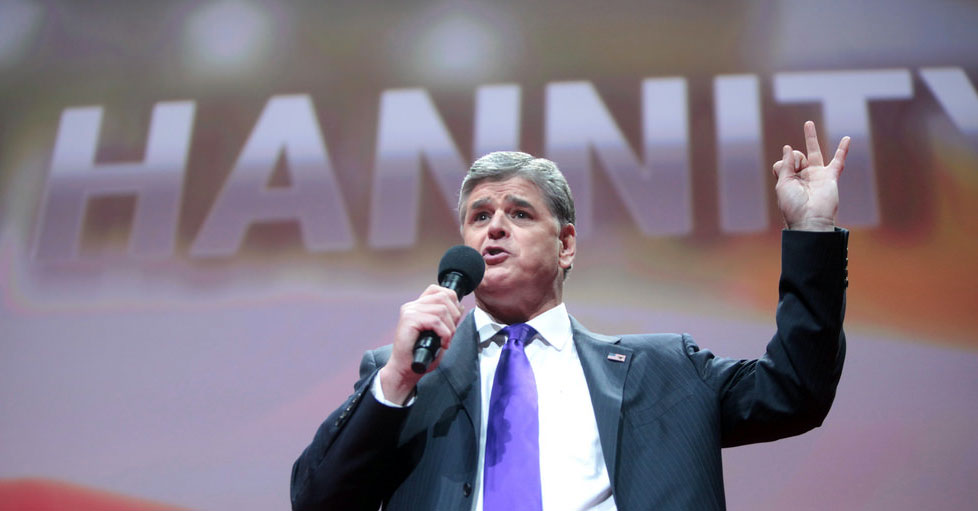 “It seems that there’s no limit at all into the fishing expedition that [special counsel Robert] Mueller is now engaged in,” Sean Hannity claimed last Monday, after FBI investigators raided the home, office, and hotel room of Michael D. Cohen, President Donald Trump’s longtime personal lawyer. “And if he has access to everything that his personal attorney has, I can only imagine where that’s going to lead.”

Seven days later, it led to Hannity himself, as an attorney for Cohen revealed that the Fox News host was Cohen’s mystery legal client, whose identity the lawyer had tried to keep concealed.

That association raises many questions, not least of which is how Fox could have allowed Hannity to vigorously defend Cohen on the network’s airwaves without disclosing that he had been Cohen’s client.

That is a serious breach of journalistic ethics that, in any normal newsroom, would lead to a suspension or even firing. “Going to find out what kind of org Fox is today,” NBC News’ Chuck Todd tweeted this morning. “No serious news org would allow someone this conflicted to cover this story.”

It’s unclear what we could learn from Fox today that we didn’t already know several years ago.

The rules are different at Fox News -- indeed, it often appears that there are no rules at all governing the behavior of the network’s top talent. This is, after all, a network that was happy for years to pay off employees who reported host Bill O’Reilly for sexual harassment in order to keep them quiet. Because Fox does not hold its stars to the most basic codes of ethical behavior, let alone the standard principles of journalistic conduct, critics hoping for accountability have little recourse but to appeal directly to the network’s advertisers.

The Hannity-Cohen story is a classic case study. Reporters and experts agree that Hannity’s actions are a drastic violation of journalistic norms that demand a severe response. But network executives aren’t answering questions about whether they were aware of Hannity’s conflict of interest or whether he will be subject to any disciplinary action. Fox’s hosts have filled that void: Hannity used last night’s program to say that he hadn’t done anything wrong. And his Fox colleagues have largely rallied behind him.

None of this is new. Hannity’s unwillingness to hew to journalistic ethics conventions has been causing the network problems for years.

At times, Fox has tried to rein him in: Hannity’s plan to broadcast from a tea party fundraiser was canceled, and after Hannity appeared in an ad for Trump’s presidential campaign, a network spokesperson said it would not happen again. But Fox executives never formally reprimanded Hannity for his actions, much less suspended him.

The last two years have only strengthened Hannity’s hand within the network. Trump’s election gave him direct access to the president of the United States. With O’Reilly gone, Hannity has the network’s most popular show and is the only remaining prime-time link to Fox’s founding. And the firings of Fox founder Roger Ailes, who hired Hannity, and Bill Shine, who was Hannity’s producer before climbing the network’s corporate ladder, removed two Fox executives to whom Hannity might have listened.

Meanwhile, increasing competition from conservative cable network Newsmax and Sinclair Broadcast Group means that Hannity would have options if he and Fox were to cut ties.

As a largely unrestrained power at Fox who has flipped back and forth on the question of whether he is a journalist who must abide by basic ethics rules, Hannity has been getting into trouble. The network’s response has been damage control, alternatively covering for him or even encouraging his actions.

Last May, Hannity spent several programs championing the conspiracy theory that a Democratic National Committee staffer had been murdered for leaking emails to WikiLeaks’ Julian Assange. But as advertisers fled his program, Fox stood behind Hannity. The network subsequently announced an internal investigation into its reporting on the story, but that review has yet to be made public, suggesting that the probe was a public relations tactic.

In the fall, Hannity hosted O’Reilly for a series of interviews in which the former host attacked the women who reported him for sexual harassment. Fox responded by heavily promoting O’Reilly’s appearance on Hannity’s Fox program.

And the network appears blissfully unconcerned about the biggest ongoing Hannity ethical disaster of all: his simultaneous status as a personal adviser to Trump and the host of a nightly program on which he worships the president and condemns his perceived foes.

In fact, Fox has rewarded Hannity for his actions, apparently hiring several conservative commentators specifically to regularly appear on Hannity’s program and those of a small circle of Hannity’s fellow travelers.

The network’s decision to prioritize Hannity over maintaining basic standards hasn’t sat well with the Fox employees who consider themselves serious journalists instead of Trump propagandists. Fox staffers have privately told reporters at other outlets that they are embarrassed and disgusted by Hannity’s antics. Fox’s Shep Smith has even publicly feuded with Hannity; he also has repeatedly run segments that appear to directly rebut arguments made on Hannity’s program.

“They don’t really have rules on the opinion side,” Smith told Time magazine last month. “They can say whatever they want.” Fox’s handling of Hannity’s Cohen conflict of interest demonstrates that they can apparently do whatever they want as well.

UPDATE: A Fox News statement on Hannity claims that the network was unaware of Hannity's conflict of interest, and now that they know, they don't particularly care.

FOX NEWS statement on Hannity: “While FOX News was unaware of Sean Hannity's informal relationship with Michael Cohen and was surprised by the announcement in court yesterday, we have reviewed the matter and spoken to Sean and he continues to have our full support.”