The family of slain Democratic National Committee staffer Seth Rich is suing Fox News for compensatory and punitive damages in response to the network’s “false and fabricated facts” that fueled ongoing conspiracy theories about his 2016 murder. The network never apologized for or explained its gross mishandling of the story.

Almost immediately after Rich was killed in July 2016, a massive right-wing conspiracy theory was born. The baseless theory generally contended that Rich’s death was linked to the email hacking of the DNC that culminated during the last presidential campaign, and that he was the source of a set of 22,000 stolen DNC emails leaked by WikiLeaks. That theory and its offshoots spread across far-right circles on social media, in right-wing blogs, and on fake news and conspiracy theory websites.

It eventually reached Fox News, when, on May 15, 2017, then-contributor Rod Wheeler told a Washington, D.C., Fox News affiliate that he had confirmed Rich was in contact with WikiLeaks. The claim was repeated in a FoxNews.com article on May 16. From there, the theory exploded in mainstream conservative media, including on Fox Business and the Fox News channel, where prime-time host and serial misinformer Sean Hannity obsessed over the case and became the conspiracy theory’s most visible national champion.

Even after Fox News retracted its online story with a vague reference to editorial standards, and, in some cases, even after Rich’s family pleaded for outlets to stop politicizing their son’s death, Hannity and other Fox News personalities continued to push the theory.

The lawsuit by Rich’s family mentions just some of the times that Fox News continued to push the conspiracy theory after the original story was retracted: 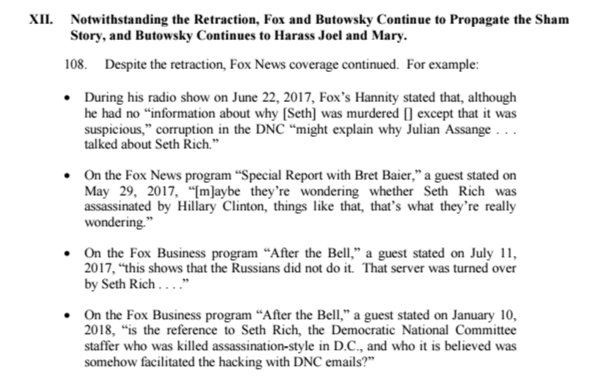 Almost a year after the network promised an investigation into the matter, no explanation for the behavior has been given nor disciplinary actions taken, according to Newsweek. To this day, the Seth Rich conspiracy theories, which have been dismantled by many major news organizations, persist.

Just this morning, Pizzagate conspiracy theorist Jack Posobiec and leading Seth Rich conspiracy theorist Matt Couch both claimed they had been in touch with one of the defendants in the case. Couch, who dismissed the suit as “nonsensical,” is exploiting the lawsuit to solicit donations for his media group, which is purportedly conducting an “investigation” into his death.

Now, nearly two years after Rich’s tragic death, his family is suing Fox News for damages because the network “aided and abetted the intentional infliction of emotional distress” and served as a national platform for a “sham story.” From a March 13 ABC News article:

In the suit, which was obtained by ABC News, Rich's parents, Joel and Mary Rich, claim that Fox News investigative reporter Malia Zimmerman and Fox News commenter Ed Butowsky reached out to the family under false pretenses to support stories that Seth Rich leaked DNC emails to WikiLeaks.

The lawsuit claims that Fox News, Zimmerman and Butowsky are liable for the harm caused by the report because they “aided and abetted the intentional infliction of emotional distress” caused by the story about Seth Rich and alleges that Fox News provided with a national platform to develop what the lawsuit dubs a “sham story.”

The Rich family claims that the “defendants’ conduct was extreme and outrageous” in what they allege was a deliberate effort to portray Seth Rich as a “criminal and traitor to the United States.”

“No parent should ever have to live through what we have been forced to endure. The pain and anguish that comes from seeing your murdered son’s life and legacy treated as a mere political football is beyond comprehension” Joel and Mary Rich said in a joint statement.