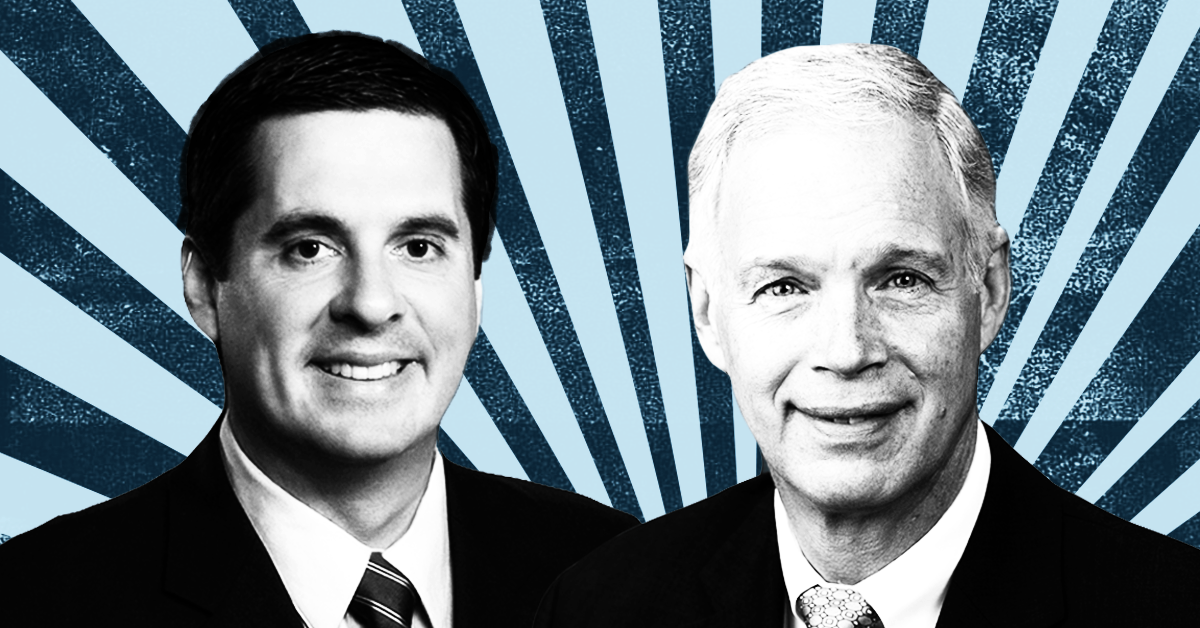 The crusade by the Republican Party and its media allies to discredit the FBI’s investigation of President Donald Trump and his campaign is a fantastically dishonest and propagandistic farce, and the whole effort is conducted with transparent bad faith while grotesquely masquerading as an exercise in good-government oversight. The mechanism driving this disinformation campaign is a pipeline of bullshit that originates with Republicans in Congress, flows directly through Fox News, and sometimes ends up spilling out all over the president’s Twitter feed.

To date, there have been two high-profile congressional sources for the “scandals” that have powered conservative media coverage of the FBI’s Trump investigation: Senate homeland security committee chair Ron Johnson (R-WI) and House intelligence committee chair Devin Nunes (R-CA). Both have been repeatedly caught lying and ginning up controversy where there is none, and both have had phenomenal success in propagating falsehoods through conservative media outlets that don’t care whether what they report is true or not.

Late last month, Johnson went on Fox News to talk about “corruption at the highest levels of the FBI” as evidenced by a text message conversation between FBI officials Peter Strzok and Lisa Page that referenced a “secret society” -- presumably a cabal of powerful individuals plotting to illegitimately tar Trump’s presidency. The “secret society” talking point quickly permeated conservative media and became a focal point of outrage.

A couple of days later, the truth about the “secret society” text came out -- it was an obvious joke between the two officials. There was no secret society, and Johnson backpedaled by acknowledging the “real possibility” that the supposedly nefarious text message he’d highlighted as proof of a conspiracy just days earlier might, in fact, be nothing more than a gag.

Just a couple of weeks after that, Johnson was at it again. His committee released an “interim report” on the FBI’s investigation of the Clinton email scandal that once again highlighted specific texts between Strzok and Page. Among them was a September 2, 2016, text from Page regarding the creation of talking points for then-FBI Director James Comey. Page wrote that then-President Barack Obama “wants to know everything we’re doing.” According to the report, “This text raises additional questions about the type and extent of President Obama’s personal involvement in the Clinton email scandal and the FBI investigation of it.”

Fueled by a credulous Fox News write-up of Johnson’s report, the text message shot like an electrical current through the conservative media, which leaped on Johnson’s suggestion that Obama might have meddled with the FBI’s investigation into Clinton. The president himself got in on the dissemination, tweeting that the “NEW FBI TEXTS ARE BOMBSHELLS” not long after his favorite Fox News morning program ran a segment on the report.

And, once again, it all turned out to be false. As The Wall Street Journal reported last week, the text was referring to a briefing on Russian election interference, not a Clinton matter. The FBI’s Clinton investigation was closed by the time Page sent the text.

Devin Nunes’ contributions to the fog of disinformation include last year’s “unmasking” fiasco, in which Nunes -- acting on information fed to him by the Trump White House -- wrongly accused Obama national security officials of inappropriately exposing  the identities of Trump aides captured on wiretaps. More recently, Nunes wrote a report that all but accused the FBI of illicitly obtaining a warrant to surveil a former Trump aide. The report’s key contention -- that the FBI hid the political origins of some of the evidence in its warrant application -- was quickly debunked.

In each of these examples, the lies spread rapidly and had ample time to become entrenched as part of a conservative media narrative before the facts undermining them could be established. Claims that former Obama officials inappropriately “unmasked” Trump associates and that an anti-Trump “secret society” exists within the FBI formed the bases of countless Fox News prime time monologues before they were debunked. After the truth came out, the lies were either quietly shelved (per a Nexis search, Sean Hannity mentioned the “secret society” in three straight Fox News shows after Johnson highlighted it on January 23, but hasn’t brought it up since) or kept alive as nefarious-sounding buzzwords (casual, unelaborated references to “unmasking” still come up regularly in Hannity rants).

The presence and power of the conservative echo chamber means that Republicans in Congress like Johnson and Nunes don’t really have to care when the obvious lies they’re peddling get debunked. They have a receptive audience for whatever conspiratorial claim they can manufacture, and they can be confident that they’ll face no factual challenge to their nonsense so long as they limit their media appearances to Fox News and other conservative safe spaces.