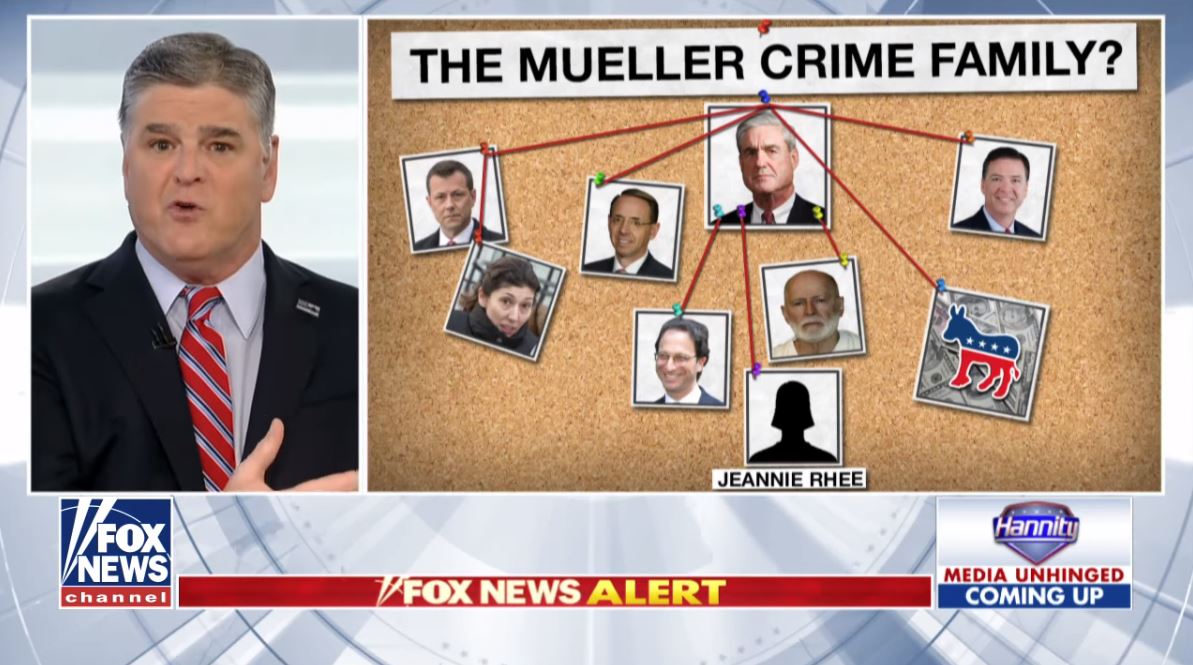 Sean Hannity, the Fox News host and adviser to President Donald Trump who has turned his broadcast into a nightly attack on special counsel Robert Mueller, smeared the head of the Russia probe by referencing one of the darkest chapters in the FBI’s history on four consecutive broadcasts last week. “During Mueller’s time as a federal prosecutor in Boston, four -- four men wrongfully imprisoned for decades framed by an F.B.I. informant and notorious gangster, Whitey Bulger, all while Mueller’s office looked the other way,” Hannity said in one such report last Wednesday.

That’s nonsense, according to Nancy Gertner, the retired federal judge who presided over the wrongful imprisonment trial of the four men and ordered the government to pay them and their families $101.7 million. As Gertner explains in a Wednesday op-ed in The New York Times, there is “no evidence” linking Mueller to the case -- and in fact, the case didn’t even involve Bulger, the infamous head of Boston’s Winter Hill Gang.

The swift unraveling of Hannity’s latest shoddy effort to discredit Mueller points to Fox’s inability or unwillingness to restrain its top-rated host as he barrels through journalistic ethics rules and ignores basic fact-checking standards.

The Bulger story has its roots in an apparently coordinated right-wing effort that kicked off last month after Trump lashed out at Mueller for the first time by name on Twitter. Those tweets, which followed reports that the special counsel had issued a subpoena for Trump Organization records, triggered a series of reports from pro-Trump sources about Mueller’s record that reportedly bore “the hallmarks of professional opposition research.”

In one such missive, headlined “Questions Still Surround Robert Mueller’s Boston Past,” Fox News contributor and Hannity fixture Sara Carter wrote on her personal website that the special counsel’s tenure as an assistant U.S. attorney and acting U.S. attorney in the 1980s “raised questions about his role in one of the FBI’s most controversial cases involving the FBI’s use of a confidential informant” -- whom she identified as Bulger -- “that led to the convictions of four innocent men, who were sentenced to death for murders they did not commit.”

The story heavily drew on criticism from David Schoen, a civil rights and defense attorney who had previously linked Mueller to Bulger while appearing alongside Carter in a February Hannity segment. Carter’s report quoted Schoen claiming Mueller had been “neck deep” in the case.

As Gertner explained in her Times op-ed, there’s no reason to believe any of this is true:

Based on the voluminous evidence submitted in the trial, and having written a 105-page decision awarding them $101.8 million, I can say without equivocation that Mr. Mueller, who worked in the United States attorney’s office in Boston from 1982 to 1988, including a brief stint as the acting head of the office, had no involvement in that case. He was never even mentioned.

The case wasn’t about Whitey Bulger but another mobster the F.B.I. was also protecting, the hit man Joseph Barboza, who lied when he testified that the four men had killed Edward Deegan, a low-level mobster, in 1965. Mr. Barboza was covering for the real killers, and the F.B.I. went along because of his importance as an informant.

Mr. Mueller is mentioned nowhere in my opinion; nor in the submissions of the plaintiffs’ lead trial counsel, Juliane Balliro; nor in “Black Mass,” the book about Mr. Bulger and the F.B.I. written by former reporters for The Boston Globe.

Carter, a former reporter for the Sinclair Broadcast Group website Circa, regularly produces shoddy reports that appear to channel the talking points of Trump’s lawyers and Republican congressional investigators. But while she now writes only for her personal blog, she is a key player in the right wing’s anti-Mueller effort because she regularly appears on Hannity and other pro-Trump Fox programs to discuss her stories.

In this case, Hannity hosted Carter and Schoen to discuss her “brand new report” on March 20, the night after she published it. Hannity termed Mueller’s purported connection to the wrongful imprisonment of the four men “one of the worst stains” on the special counsel’s record. He returned to the story on the next two editions of his show.

Hannity did not mention the case again until last Monday, when he responded to the FBI’s raid of Michael D. Cohen, Trump’s longtime personal lawyer (who, as would later be revealed, had also done legal work for Hannity himself).

During his unhinged performance that night -- promoted by the president on Twitter -- Hannity mapped out the “Mueller crime family,” which he said included Bulger. He trumpeted Mueller’s purported malfeasance in the case that night and during his next three broadcasts.

Meanwhile, other players in the pro-Trump media, including radio host Rush Limbaugh and Boston Herald columnist and radio host Howie Carr, picked up the story. These conservative commentators, desperate to damage Mueller’s credibility in order to forestall his investigation and set the stage for his firing, don’t much care if these stories are true.

“When Mr. Hannity and others say Mr. Mueller was responsible for the continued imprisonment of those four men, they are simply wrong — unless they have information that I, Balliro, the House investigators and the ‘Black Mass’ authors did not and do not have,” Gertner concluded, referring to a book by Boston Globe reporters about Bulger and the FBI. “If they do, they should produce it. If they don’t, they should stop this campaign to discredit Mr. Mueller.”

Hannity doesn’t have any additional information, but don’t count on him to stop running with the talking point now that it’s been debunked -- or issuing a correction, as would happen at any other network. At Fox, there are no rules for Hannity.