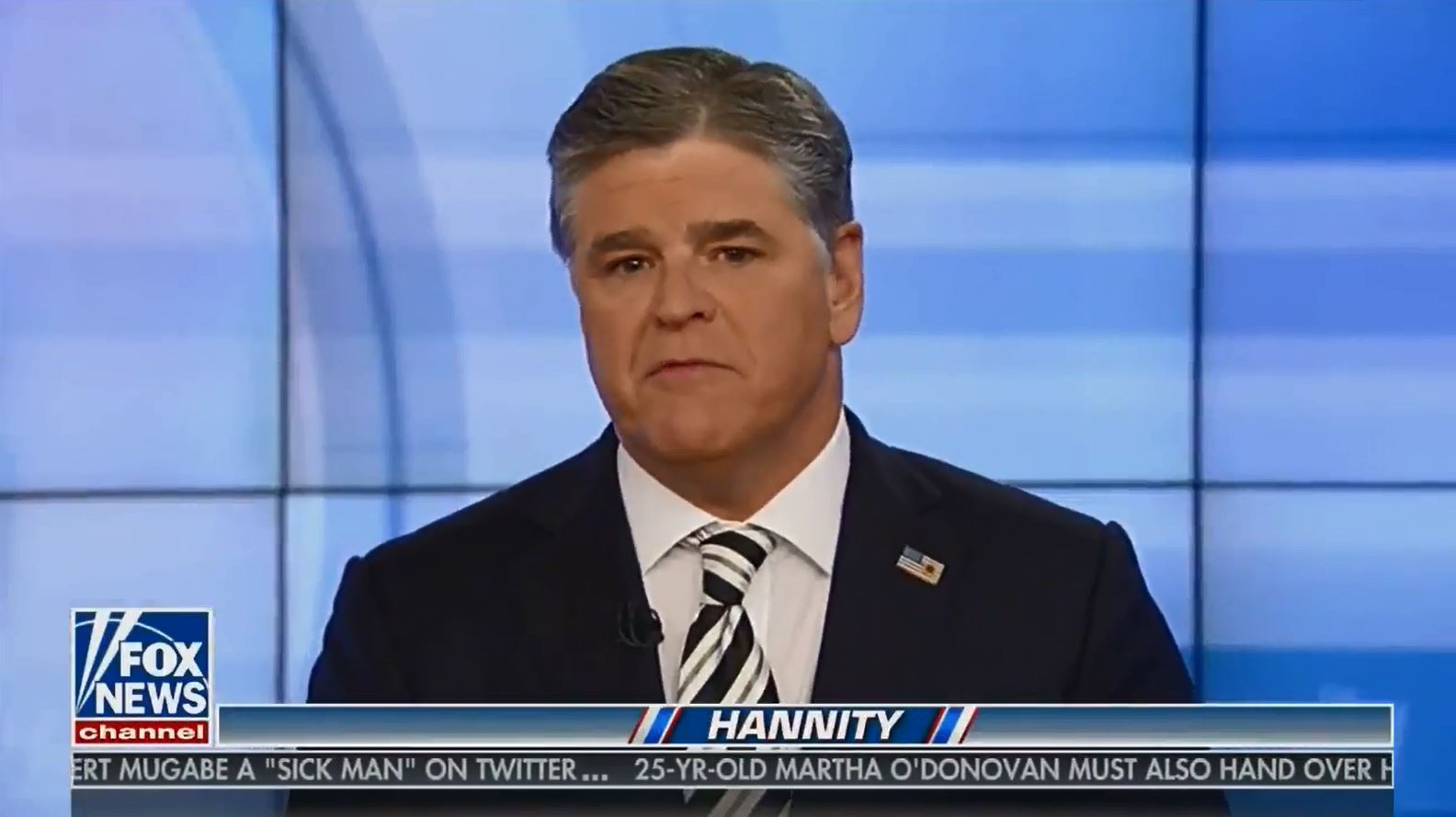 Fox host Sean Hannity is dishonestly attacking Media Matters for publishing a transcript of a comment he made on his radio show yesterday about Roy Moore’s reported predation of young women, even though Hannity himself now acknowledges his remark was a mistake.

Yesterday, The Washington Post reported that Leigh Corfman says that Moore, now the Republican nominee for U.S. Senate in Alabama, drove her to his home when she was 14 in 1979, “touched her over her bra and underpants ... and guided her hand to touch him over his underwear.” The paper also reported that three other women say that around the same time, Moore “pursued them when they were between the ages of 16 and 18 and he was in his early 30s.” Numerous Republican leaders have said that if the reports are true, Moore should step aside from the race.

Shortly after the Post story broke, Hannity discussed it on his nationally syndicated radio show. Media Matters published two audio clips from his discussion, each more than five minutes long and including partial transcripts of his remarks.

On Twitter and in a statement to Mediaite, Hannity has claimed that Media Matters took him out of context. He is taking issue with the accusation that his description of Moore’s encounters as “consensual” applies to the 14-year-old Moore allegedly molested, saying that he meant to refer only to Gloria Thacker Deason, the woman who was 18 at the time Moore reportedly “pursued” her. On Fox last night, Hannity acknowledged that he had made a mistake, saying, “That one line was absolutely wrong. I misspoke.”

I accept Hannity’s clarification that he meant to refer only to the 18-year-old woman, not Corfman, and I am glad he has cleared up what he admits was his error. But the audio clip in question did not assert that Hannity said Moore had a “consensual” relationship with Corfman.

The clip details Hannity’s discussion of the Post story with Lynda McLaughlin and is headlined “Hannity defends Roy Moore against Wash. Post report he molested a child: ‘It's he said, she [said].’” Its subheadline is “Hannity floats conspiracy theories: ‘The establishment -- they hate Roy Moore.’ ‘There's politics in all of this.’ ‘There are false allegations made.’”

The clip includes partial transcript of his comments, including the statement that occurred in crosstalk that Hannity has since clarified:

HANNITY: How do you possibly tell, know the truth, except -- OK, so the two other girls were older in this case. He was apparently, like, 32, and he dated -- one girl was 18, one girl was 17. They never said he did -- there was no sexual -- there was kissing involved, and then they're saying this one encounter with a 14-year-old --

MCLAUGHLIN: And it was consensual --

HANNITY: And consensual, that's true. And there's -- I just -- I don't know how you find out the truth.

Our clips often include extensive transcript and audio specifically to defuse claims that we take people out of context.

While our clip did not call attention to the “consensual” remark, yesterday evening a pseudonymous Twitter user not affiliated with Media Matters highlighted that portion of the transcript. CNN anchor Jake Tapper then quote tweeted that tweet, commenting, “Legally, one cannot give consent if one is underage,” leading to a confrontation with Hannity.

After Hannity responded by attacking Tapper for purportedly taking cues from Media Matters, Tapper commented that “several news organizations covered your shocking and inaccurate words where you called sexual contact with a 14 year old ‘consensual.’” Tapper subsequently said he would “take Hannity at his word and assume he was not referring to the 14 year girl old incident as ‘consensual’ but rather the 17/18 year old girls” and deleted his previous tweets.

During his Fox program, Hannity admitted he misspoke but nonetheless attacked his critics. In a statement to Mediaite later that night, he said, “I apologize when I misspoke and was not totally clear earlier today,” attacked Media Matters for having “purposefully taken me out of context,” and said that his comments were “clear and unambiguous both on radio and on TV.” Again, Media Matters did not call attention to the comment that Hannity now acknowledges he made in error other than by including it in a transcript.

Hannity’s criticism of Media Matters should be seen as part of a months-long effort to attack the organization, which is often aided by his frequent collaborator and disgraced former Fox colleague Bill O’Reilly, due to our support for advertiser boycotts against both. His remarks are shameless and desperate, and no one should be taken in by them.