Harris is a former pastor who has appeared in anti-LGBTQ media outlets such as Pat Robertson’s Christian Broadcasting Network and American Family Association’s American Family Radio. He has a history of pushing sexist remarks and promoting bigotry against Muslims and LGBTQ people. Harris’ race is considered one of the most competitive in the country.

During his October 16 Fox News show, while running through “10 more of the House races that will decide the fate of the country,” Hannity said that “in North Carolina [District] Nine, Democrat Dan McCready has a big-time cash advantage, but conservative Republican Mark Harris has a very slight edge. He needs your help.”

Harris responded to the segment the following day with a Facebook ad soliciting donations that features video of Hannity’s remarks. According to Harris, “Sean Hannity is Correct! My opponent is a liberal awash in cash because he is #PoweredByPelosi. We need your help to win this race for the good guys.” 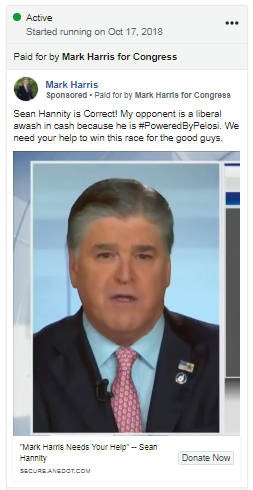 Facebook’s ad performance numbers state as of posting that the ad has been viewed 5,000-10,000 times in North Carolina and the campaign has spent less than $100 on it.

Fox News has previously asked campaigns to take down advertisements that have video from the network in them. It did not respond to a request for comment.

The network has frequently helped Republican candidates -- both on- and off-air. Hannity himself has headlined campaign events for two Florida politicians: gubernatorial candidate Rep. Ron DeSantis and congressional candidate Rep. Matt Gaetz this year. He will travel to Texas this weekend to campaign for Sen. Ted Cruz.