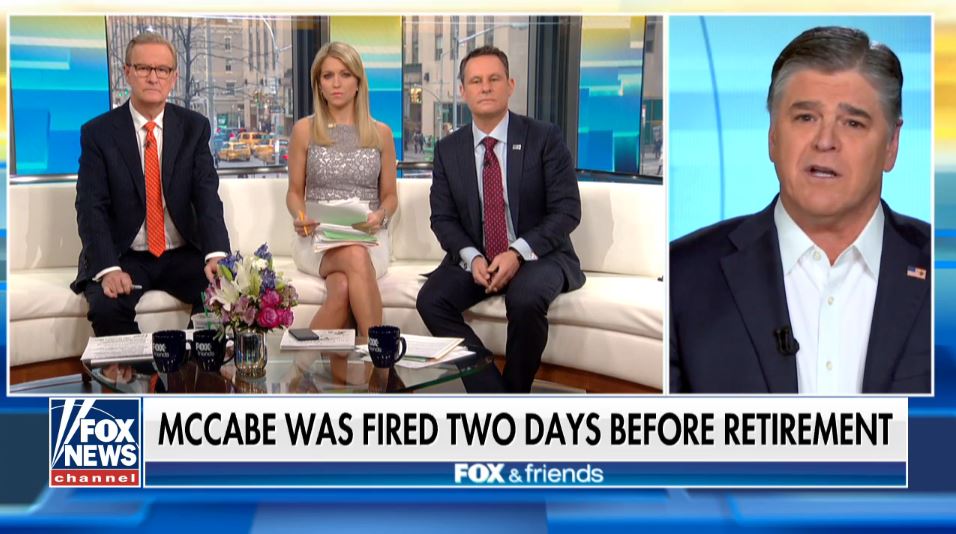 In a special appearance on Fox & Friends this morning that President Donald Trump promoted on Twitter, Fox News host Sean Hannity said there “never was any Trump-Russia collusion,” claimed that Hillary Clinton and top FBI and Justice Department officials should be investigated and prosecuted, and lashed out at the “fake news media.” The interview and Trump's tweets about it shed light on the feedback loop between the president and Fox -- a loop in which Trump cheers as his TV news propagandists play to and encourage his worst and most destructive impulses.

At 8:16 a.m. ET, shortly after Fox & Friends promoted Hannity’s guest spot, Trump tweeted, “.@seanhannity on @foxandfriends now! Great! 8:18 A.M.” Trump frequently watches the program and tweets along with segments that catch his attention. Hannity is one of the president’s favorite television personalities, and he plays a dual role as the host of Fox’s most-watched show and as a trusted presidential adviser and confidant.

“If I had to expect, you’re going to see criminal charges against Andrew McCabe,” Hannity said. “I would also argue that it’s going to go a lot deeper.” He claimed that while Trump is apparently innocent of wrongdoing, “we do have, sadly, at the upper levels of the FBI and Department of Justice, serious issues, crimes, that really need to be investigated, not the least of which” involve Comey. He also highlighted McCabe’s “political conflict that very few people people in the media talked about" a reference to political donations his wife received while running for state office in 2015 that Trump has repeatedly seized upon.

Hannity went on to criticize the Justice Department for not prosecuting Clinton for the “many crimes” he said she committed.

Toward the end of the interview, Hannity completely reversed his long-held position that Mueller should be removed, keeping himself in line with the current White House position.

On Sunday night, White House lawyer Ty Cobb issued the following statement: “In response to media speculation and related questions being posed to the Administration, the White House yet again confirms that the President is not considering or discussing the firing of the Special Counsel, Robert Mueller.” The statement followed Trump tweeting, “The Mueller probe should never have been started,” and Trump lawyer John Dowd telling The Daily Beast that he hoped Deputy Attorney General Rod Rosenstein would shut down the probe.

Hannity has called for Mueller’s firing or resignation dozens of times -- he said the probe “should be shut down immediately” as recently as March 12 -- and has even called for him to be investigated on federal charges. But asked this morning whether he thinks firing Mueller would be a good idea, Hannity said that Trump “didn't say he was going to fire him” and blamed the “fake news media” for misinterpreting the president’s comments. He went on to say that “maybe, if I was advising the president, I would say, ‘Let this investigation go forward -- we’re probably coming to the end of it.’”

Trump apparently watched and enjoyed the interview. He echoed one of Hannity’s claims by tweeting, “A total WITCH HUNT with massive conflicts of interest!”