Following Fox host Sean Hannity's March 8 conspiracy theory that the CIA framed the Russian government for election interference, Hannity tweeted at WikiLeaks on March 9 asking them to confirm his suspicion. This tweet is just the latest example of Hannity’s increasingly far-fetched attempts to defend President Donald Trump against any and all Russia-related allegations follows his months-long courting of WikiLeaks and its founder, Julian Assange.

On March 9, Hannity tweeted at WikiLeaks, asking “Is it possible, likely or can you confirm instances where the CIA used Malware to ‘Attribute’ cyberattacks to other nations? Possibly Russia”: 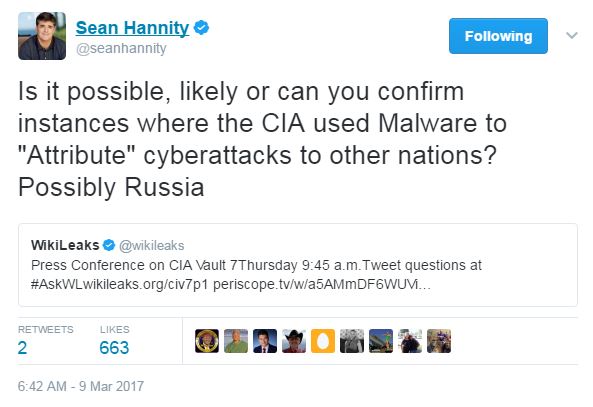 This is just the latest example of Hannity's embrace of WikiLeaks. Throughout the 2016 election, Hannity and WikiLeaks developed a relationship of mutual admiration and promotion of one another. Hannity, who called for Assange’s arrest in 2010, had a change of heart once WikiLeaks started attacking Hillary Clinton’s presidential campaign. Hannity went on to host Assange for multiple interviews on his radio and television shows, and the Fox host has described Assange as “the modern day Woodward and Bernstein,” a reference to the Washington Post reporters who broke the Watergate story. Hannity’s newfound love for WikiLeaks led him to defend the organization’s conduct, even after it was confirmed that the documents they published originated from Russian-backed hacking intended to interfere in the 2016 election, because WikiLeaks “reveal[ed] how corrupt the liberal media is.” WikiLeaks, in turn, has promoted Hannity’s Assange interviews several times and has twice recently tweeted a Hannity segment featuring right-wing talk radio host Laura Ingraham talking about the “deep state.”

Though Hannity has always fervently defended Trump and lashed out at the president’s critics -- including accusing the media of “purposefully distorting” Trump’s request that the Russian government “find the 30,000 emails that are missing” -- Hannity’s Trump defenses have become increasingly conspiratorial. Hannity decried the entire story of alleged ties between Trump and Russia as “politically motivated” “liberal fake news.” He also called the consensus of 17 U.S. intelligence agencies that Russia attempted to disrupt the election “fake news,” claiming that there are not 17 intelligence agencies (there are.) So far, Hannity’s conspiratorial navel-gazing has culminated (in addition to the aforementioned CIA conspiracy theory) in the absurd allegation that former President Barack Obama’s campaign database is proof of “a shadow government” undermining the Trump administration, a claim also made by several fake news purveyors.