The Washington Post reported on Sunday that Christine Blasey Ford had written a letter this summer to a Democratic lawmaker saying that Supreme Court nominee Brett Kavanaugh sexually assaulted her when they were both high school students. Soon after Ford’s account was published, right-wing media figures and outlets began attacking her credibility, publicly discounting her story, or calling on Kavanaugh to be confirmed by Republicans anyway.

Details from the letter, which she wrote to Sen. Dianne Feinstein (D-CA), leaked out several days earlier, and then Ford “decided that if her story is going to be told, she wants to be the one to tell it.” From the Post’s story:

Speaking publicly for the first time, Ford said that one summer in the early 1980s, Kavanaugh and a friend — both “stumbling drunk,” Ford alleges — corralled her into a bedroom during a gathering of teenagers at a house in Montgomery County.

While his friend watched, she said, Kavanaugh pinned her to a bed on her back and groped her over her clothes, grinding his body against hers and clumsily attempting to pull off her one-piece bathing suit and the clothing she wore over it. When she tried to scream, she said, he put his hand over her mouth.

“I thought he might inadvertently kill me,” said Ford, now a 51-year-old research psychologist in northern California. “He was trying to attack me and remove my clothing.”

Ford said she was able to escape when Kavanaugh’s friend and classmate at Georgetown Preparatory School, Mark Judge, jumped on top of them, sending all three tumbling. She said she ran from the room, briefly locked herself in a bathroom and then fled the house.

Ford said she told no one of the incident in any detail until 2012, when she was in couples therapy with her husband. The therapist’s notes, portions of which were provided by Ford and reviewed by The Washington Post, do not mention Kavanaugh’s name but say she reported that she was attacked by students “from an elitist boys’ school” who went on to become “highly respected and high-ranking members of society in Washington.” The notes say four boys were involved, a discrepancy Ford says was an error on the therapist’s part. Ford said there were four boys at the party but only two in the room.

Notes from an individual therapy session the following year, when she was being treated for what she says have been long-term effects of the incident, show Ford described a “rape attempt” in her late teens.

Kavanaugh has denied the report after Ford went public, calling it “a completely false allegation.” He previously said, “I categorically and unequivocally deny this allegation.” The immediate reaction from many conservative media figures was terrible: Many cast doubt on her account, others suggested they might believe her but said Kavanaugh should be confirmed as a Supreme Court justice anyway, and others impugned her motives, suggesting a political or personal grudge.

FoxNews.com’s Stephen Miller: “This was not a sexual assault. … Hold the vote. Confirm him. … It was drunk teenagers playing seven minutes of heaven.”

Breitbart’s John Nolte: “GOP blows Kavanaugh, falls for this, they will be massacred in November.”

Conspiracy theorist Alex Jones mocked Ford’s accusation: “Brett Kavanaugh in 1986 came to Dallas, TX, and I was in high school, and he raped me.”

Trump ally and conservative political operator Roger Stone: “This is a woman looking for her Anita Hill moment. This is her 15 minutes.”

Turning Point USA’s Candace Owens: “Nothing to see here, folks,” Ford is “just another woman who conveniently tripped and fell out of amnesia.”

Conservative radio host Erick Erickson: “If the GOP does not stand up to this character assassination attempt on Kavanaugh, every judicial nominee moving forward is going to suffer last minute sexual assault allegations.”

Erick Erickson: “I do not believe Brett Kavanaugh’s accuser. I do believe there is a Democrat PR firm working this story.”

Erick Erickson: “People who want to keep killing kids really shouldn’t be throwing Jesus in the face of those who don’t believe the accusation against Kavanaugh.”

Tomi Lahren: “Female empowerment is NOT using sexual assault allegations to torpedo someone you disagree with politically.” 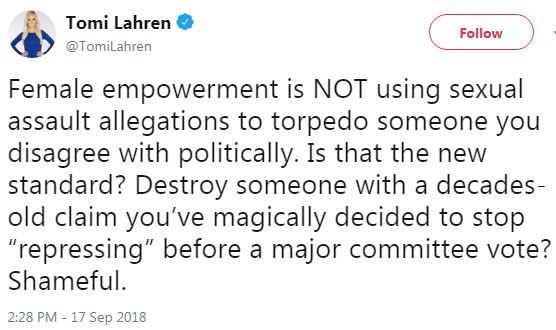 Fox contributor Tammy Bruce: Report of assault by Kavanaugh is “an attempt at a political assassination.”

Newsmax’s John Cardillo: “No, 35+ year old dubious allegations about a non-crime made by a left-wing activist … do not hold water.”

NRATV’s Grant Stinchfield: “I have no idea if Judge Kavanaugh pushed this woman down on a bed at a high school house party where she wriggled free and ran away or not. What I do know is in the 35 years since, not one other woman has raised such an allegation. Sixty-five other women have, in fact, now come to his defense.”

Fox Business host Dagen McDowell: “You have to press [Ford] on any potential bias that’s there” against Republicans.

The despicable Democrats are pulling out all the stops to try and derail the Judge Kavanaugh vote for SCOTUS.

They’re now claiming that Judge Kavanaugh attacked a woman in high school, nearly killing her. The woman, whose story has more holes than a slice of swiss cheese, claims there was a man in the room who witnessed the entire thing.

One big problem. That man, says it never happened. 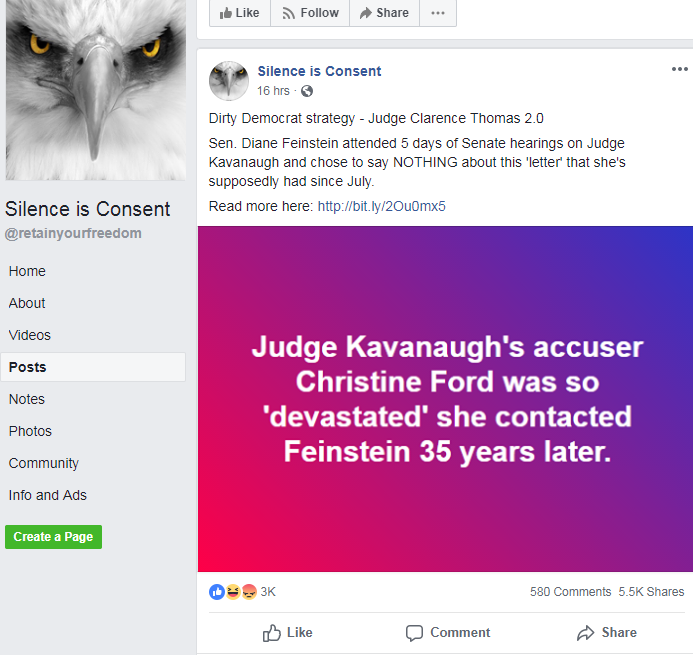 Fox Business host Bob Massi: “The thing that’s remarkable to me” is that someone “with amazing credentials, amazing resumes, and an allegation like this comes out … and their entire career credibility is gone. … That’s the trouble with this.”

Fox News host Sean Hannity cast doubt on Ford's accusation because of “everything else you see about Judge Kavanaugh's life ... this is a guy that spends a lot of time feeding the homeless.”

CRTV's Mark Levin on Ford's accusation: “This whole thing to me sounds like a sham and a setup. ... This is an entire political scam and sham as far as I'm concerned.”

The Salem witch trials turned on what was called “spectral evidence.” That was testimony from witnesses—either malicious or hysterical—who claimed the accused had assumed the form of a black cat or some other devilish creature and had come visiting in the night in order to torment the witness with bites and scratches, or to rearrange the bedroom furniture, or to send the baby into paroxysms.

Three hundred twenty-six years later, an anonymous woman—a spectral and possibly nonexistent woman, for all that one knew when the story emerged—accused Brett Kavanaugh of sexually assaulting her 36 years ago, when he was a high-school student. It seemed as if the American constitutional process might be drawn back to the neighborhood of Salem, Mass. According to this phantom testimony, 17-year-old Brett held the girl down, pawed her and tried to force himself upon her, and held his hand over her mouth when she screamed, until a second prep-school devil piled on top, they all tumbled to the floor, and the girl managed to slip away. The boys were “stumbling drunk,” according to the account.

The thing happened—if it happened—an awfully long time ago, back in Ronald Reagan’s time, when the actors in the drama were minors and (the boys, anyway) under the blurring influence of alcohol and adolescent hormones. No clothes were removed, and no sexual penetration occurred. The sin, if there was one, was not one of those that Catholic theology calls peccata clamantia—sins that cry to heaven for vengeance.

The offense alleged is not nothing, by any means. It is ugly, and stupid more than evil, one might think, but trauma is subjective and hard to parse legally. Common sense is a little hard put to know what to make of the episode, if it happened. The dust of 36 years has settled over the memory. The passage of time sometimes causes people to forget; sometimes it causes them to invent or embellish. Invention takes on bright energies when its muse is politics, which is the Olympics of illusion.

Conservatives who indicated that whether or not they believe Ford, Kavanaugh should be confirmed

Federalist contributor Tom Nichols: “I’m good with the story being true,” but it shouldn’t “derail [his] nomination.”

Daily Wire’s Matt Walsh: Ford’s report can’t be proven, “so he should be confirmed.” 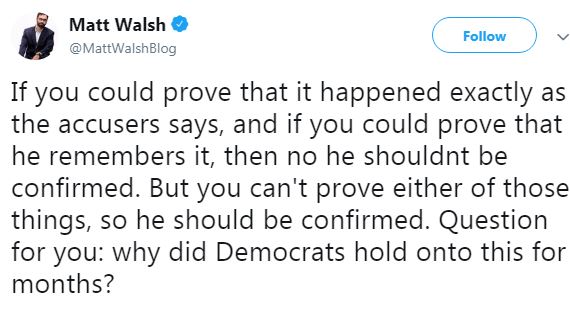 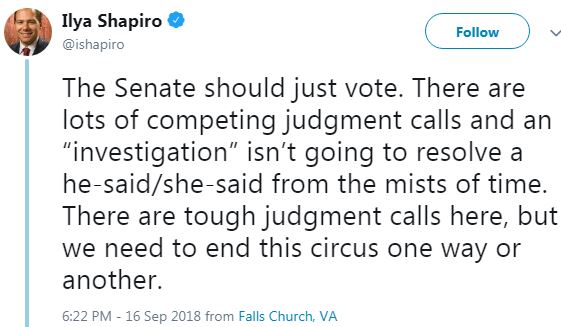 The Federalist: Kavanaugh “should be confirmed” despite Ford’s report.

Townhall.com editor Guy Benson: “Absent additional evidence, I don’t know how it would be remotely just to derail the nomination” of Kavanaugh. 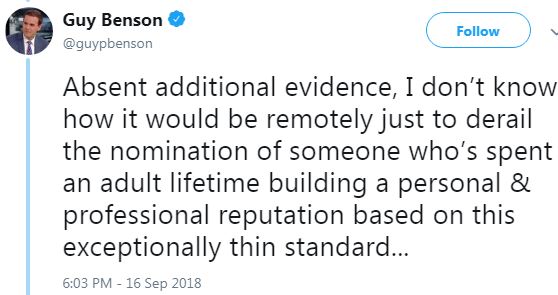 The Wall Street Journal editorial board suggested Ford possibly misremembered “in the cauldron of a therapy session to rescue a marriage,” and stated that letting Ford's accusation “stop Mr. Kavanaugh's confirmation would ratify what has all the earmarks of a calculated political ambush.”

The woman accusing Brett Kavanaugh of a drunken assault when both were teenagers has now come forward publicly, and on Monday it caused Republicans to delay a confirmation vote and schedule another public hearing. Yet there is no way to confirm her story after 36 years, and to let it stop Mr. Kavanaugh’s confirmation would ratify what has all the earmarks of a calculated political ambush.

Mr. Kavanaugh denies all this “categorically and unequivocally,” and there is simply no way to prove it. The only witness to the event is Mr. Kavanaugh’s high school male friend, Mark Judge, who also says he recalls no such event. Ms. Ford concedes she told no one about it—not even a high school girl friend or family member—until 2012 when she told the story as part of couples therapy with her husband.

The vagaries of memory are well known, all the more so when they emerge in the cauldron of a therapy session to rescue a marriage. Experts know that human beings can come to believe firmly over the years that something happened when it never did or is based on partial truth. Mistaken identity is also possible.

This is simply too distant and uncorroborated a story to warrant a new hearing or to delay a vote. We’ve heard from all three principals, and there are no other witnesses to call. Democrats will use Monday’s hearing as a political spectacle to coax Mr. Kavanaugh into looking defensive or angry, and to portray Republicans as anti-women. Odds are it will be a circus.

Letting an accusation that is this old, this unsubstantiated and this procedurally irregular defeat Mr. Kavanaugh would also mean weaponizing every sexual assault allegation no matter the evidence. It will tarnish the #MeToo cause with the smear of partisanship, and it will unleash even greater polarizing furies.

Mike Cernovich: “Christine Blasey is a far left wing activist. ... this is straight activism on her part.”

The Gateway Pundit: Ford is a “far-left activist.” 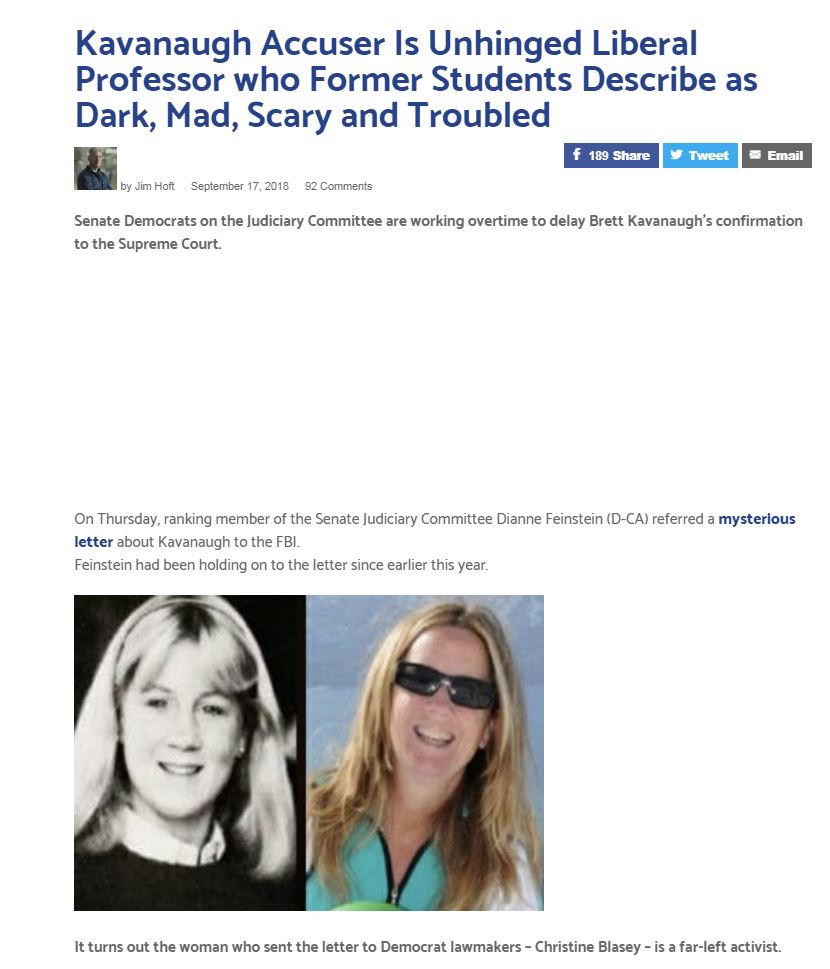 Fox News host Laura Ingraham: “Apparently this accuser was fine with leaving Brett Kavanaugh on the second highest court of the land. … But it was when he was up for the Supreme Court that suddenly the stakes got higher.”

Laura Ingraham: “This all has the whiff of a political smear masquerading as a sexual assault allegation.”

Fox News host Tucker Carlson: “Does anyone really believe this story would have surfaced if Brett Kavanaugh had pledged allegiance to Roe v. Wade? Of course it wouldn't have.”​ 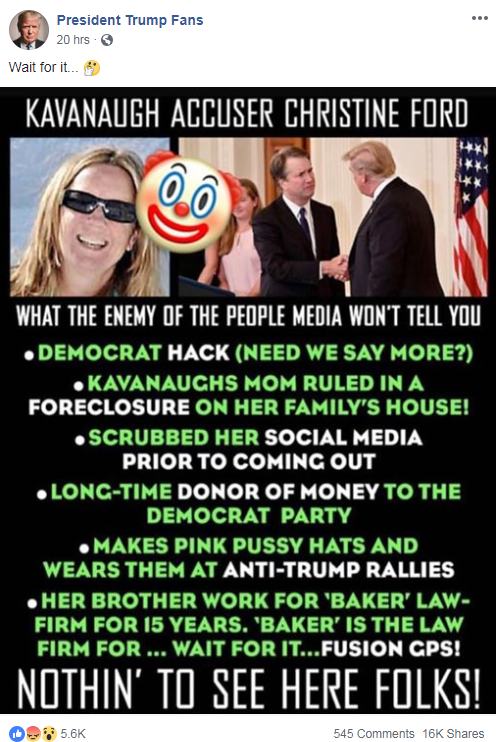 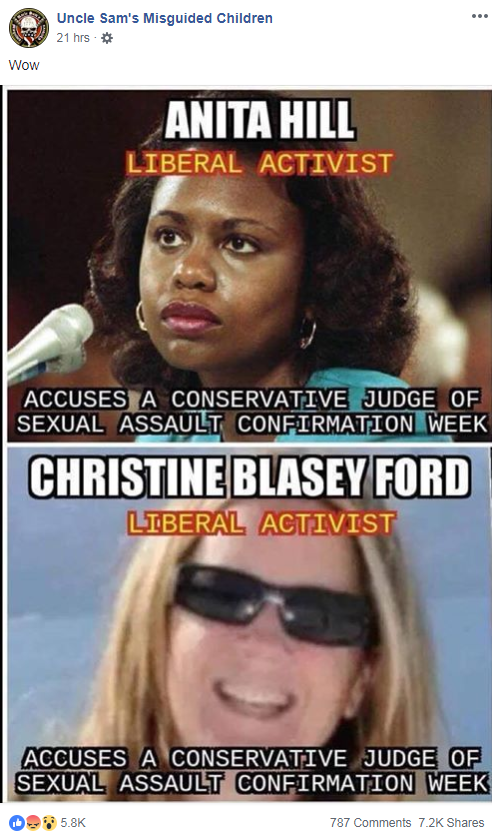 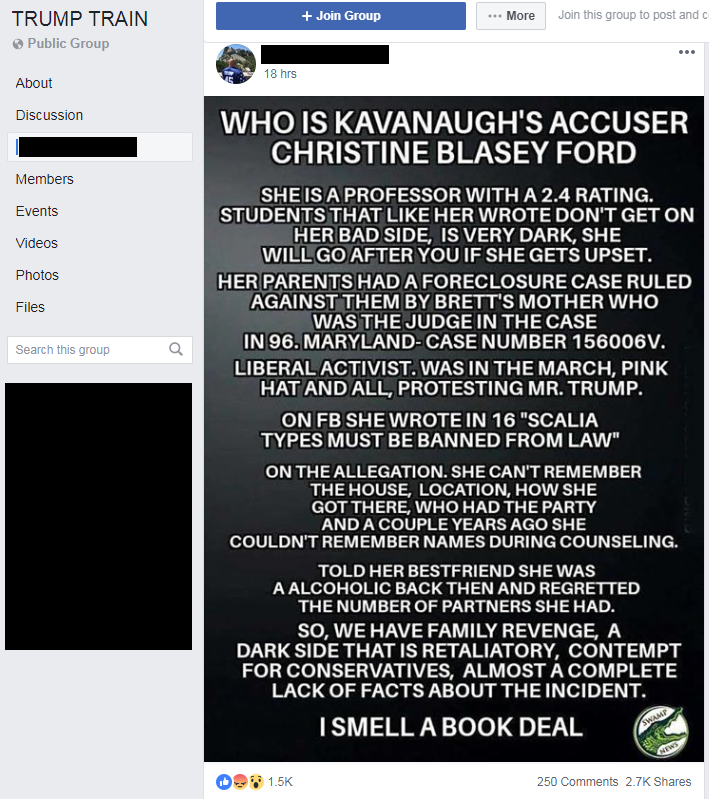 Some pages tried to undermine Ford’s allegations by questioning her timing in coming forward and her memory of the incident. [1, 2, 3, 4, 5] 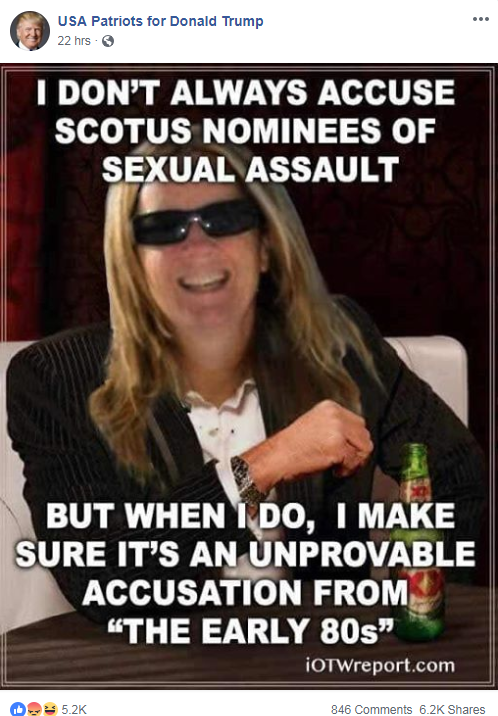 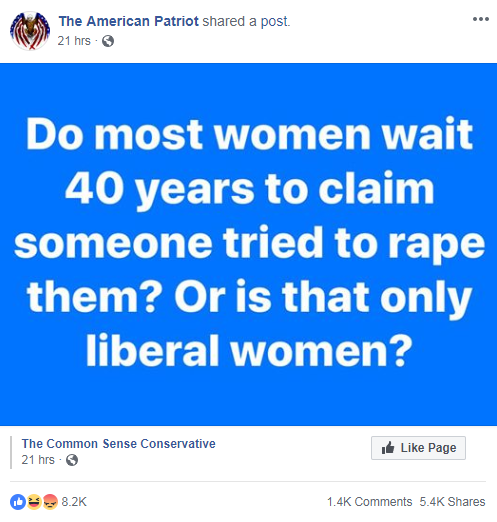 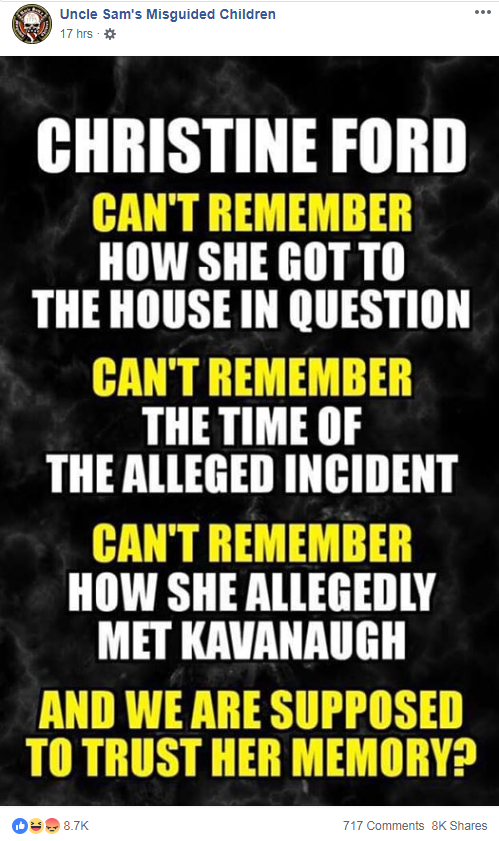 A woman from a Shuttershock photo of an anti-Trump protest in New York City was falsely attributed as Ford. [1, 2] 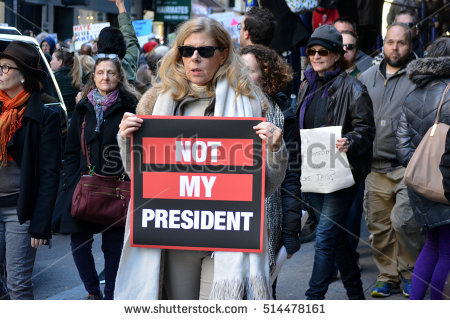 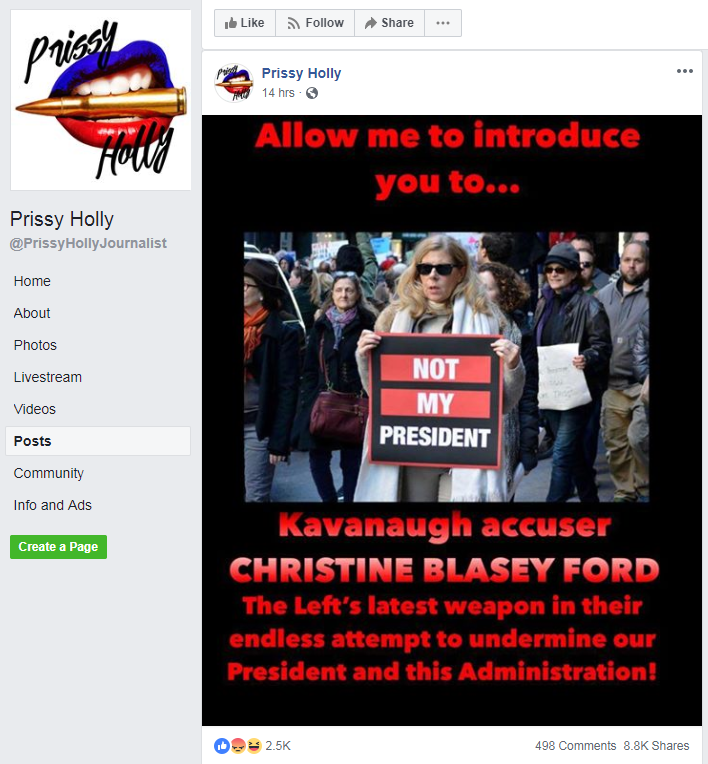 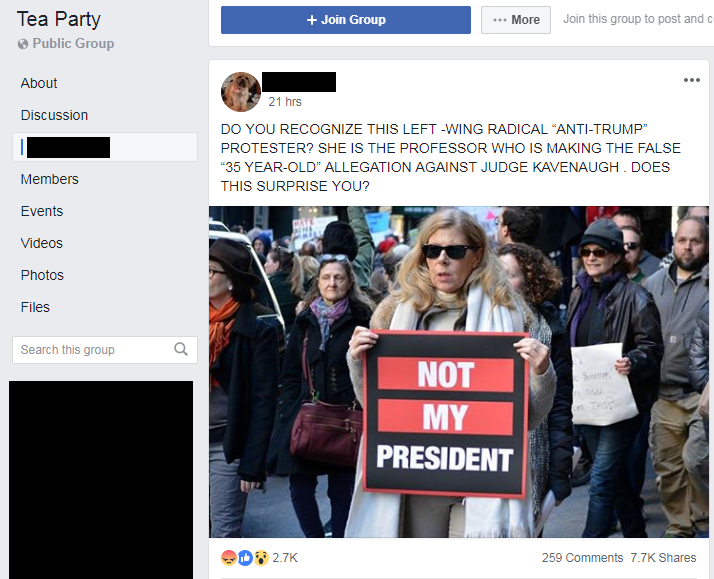 Alex Kaplan and Natalie Martinez contributed research to this post.