Multiple right-wing figures and supporters of the “QAnon” conspiracy theory on social media spread a deceptively edited video clip of Rep. Ilhan Omar (D-MN) -- who has been repeatedly targeted with false online smears -- reaching Sen. Marco Rubio (R-FL), who tweeted it out. Since then, multiple Fox hosts have also pushed the false claim.

In February 2018, Omar, then a Minnesota state representative, spoke with host Medhi Hasan on Al-Jazeera’s UpFront, discussing the rise of anti-Muslim bigotry and President Donald Trump’s election. Hasan asked Omar to respond to conservatives who claim “that the rise in Islamophobia is a result not of hate but of fear -- a legitimate fear, they say, of quote unquote ‘jihadist terrorism.’” Omar replied, “I would say our country should be more fearful of white man across our country because they are actually causing most of the deaths within this country.” Criticizing religion-based profiling, Omar then said: “So if fear was the driving force of policies to keep America safe -- Americans safe inside of this country, we should be profiling, monitoring, and creating policies to fight the radicalization of white men.” Later in the interview, when Hasan asked Omar if it was “fair” to say there was “a lot of bad rhetoric coming from Muslim community leaders,” she said it “could be true” and that there are “segments within communities that are using fear and hate to mobilize their base.”

Omar’s point about the “radicalization of white men” is based on facts: As The Washington Post has noted, a report from the Anti-Defamation League found that 2018 saw the most domestic extremist-related killings in the United States since 1995, out of which 78% involved white nationalists. And on July 23, FBI Director Christopher Wray testified before Congress that the “majority” of people being investigated in domestic terrorism cases “are motivated by some version of what you might call white supremacist violence.”

Nonetheless, right-wing figures spread a clip of Omar’s UpFront interview on social media that left out the “if fear was the driving force” line and her later criticism of community leaders using “fear and hate to mobilize their base.” The deceptively edited clip was framed along the false impression that Omar was literally calling for the surveillance of white men, and right-wing figures used it to smear Omar as racist.

Here is how the lie spread:

On the evening of July 23, Christian Broadcasting Network (CBN) published a report headlined “'Our Country Should Be More Fearful of White Men': Ilhan Omar’s Past Comments Ammunition in 'Political Food Fight' with Trump,” which left out the context of Omar’s remark:

Trump has no doubt taken what he views as the squad's anti-American views and morphed it from a news cycle to both a news cyclone and a new contour for the 2020 race. But will that guarantee a second term?

“In 2016, President Trump won in large part due to independents and I think they would rather be talking about the economy, the courts, rather than having this Twitter fight play out between the President, and 'the squad,'” Conant noted.

The material is not hard to find. In doing the research for this story, we came across this interview with Omar, when she was running for Congress.

Moderator: “A lot of conservatives, in particular, would say the rise in Islamaphobia is a result not of hate but of fear. A legitimate fear they say of, 'jihadist terrorism' whether it's Fort Hood or San Bernardino, or the recent truck attack in New York. What do you say to them?”

Omar: “I would say that our country should be more fearful of white men across our country because they are actually causing most of the deaths within this country.”

The article also included a report by CBN chief political analyst David Brody, which, among other smears, included a deceptively edited clip of Omar’s remark.

The same day CBN posted Brody’s report, he tweeted a video that included more of Omar’s remark, but his text did not note the additional context. 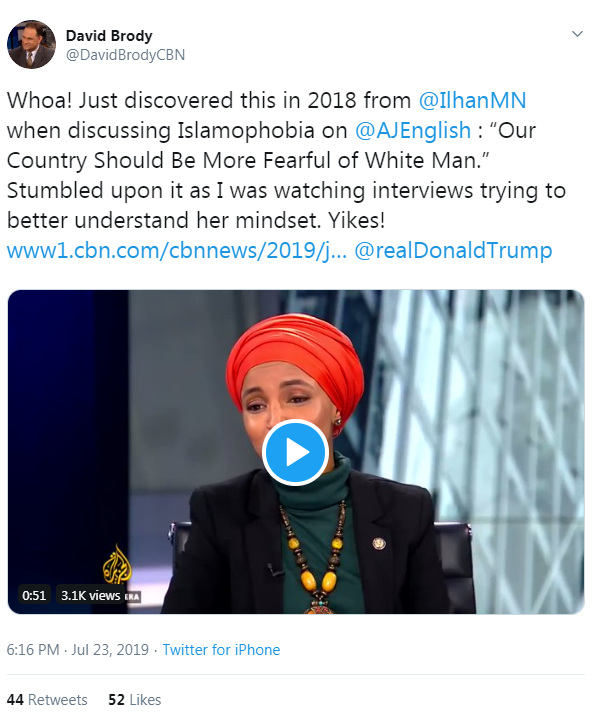 On the morning of July 24, the site Grabienews published a piece headlined “Ilhan Omar: We Should Be ‘More Fearful of White Men,’” which included a version of the edited clip from CBN’s video. 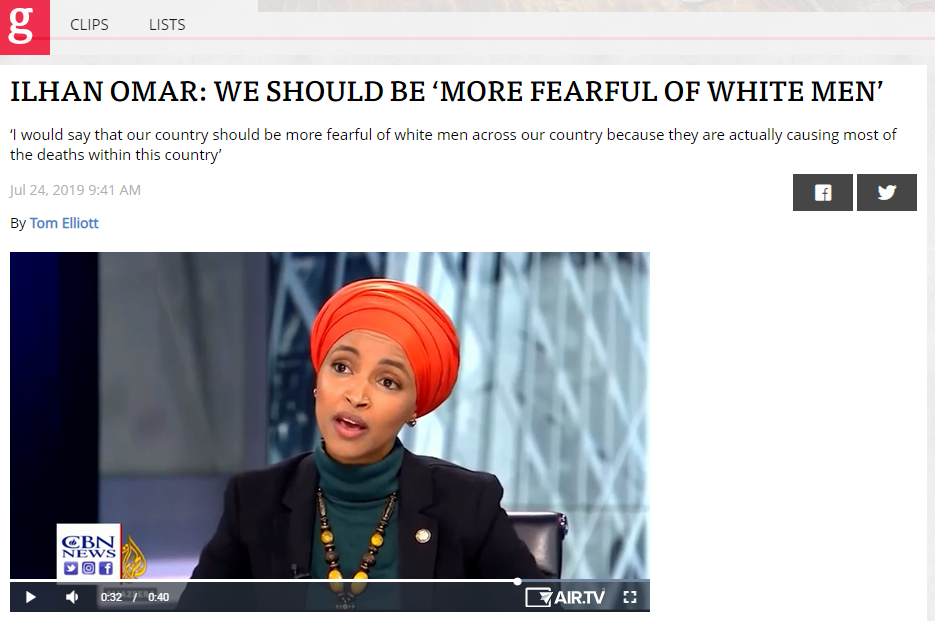 Later that morning, Molly Prince, who has written for The Daily Caller, tweeted the same CBN clip Grabienews featured, writing, “Ilhan Omar contends that Americans ‘should be more fearful of white men.’” 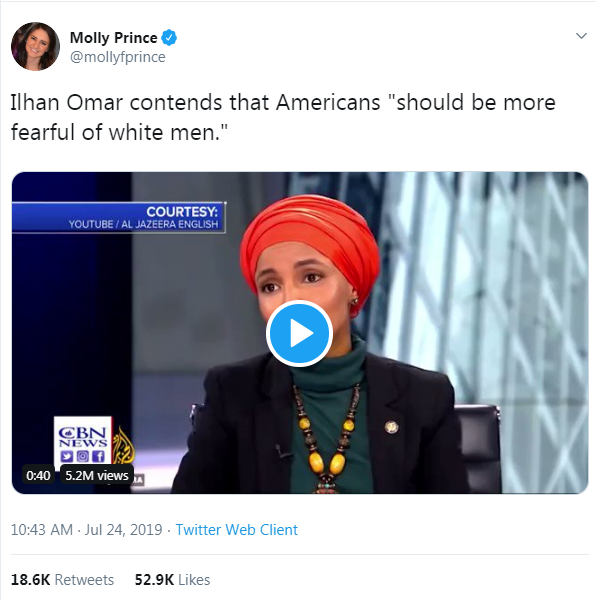 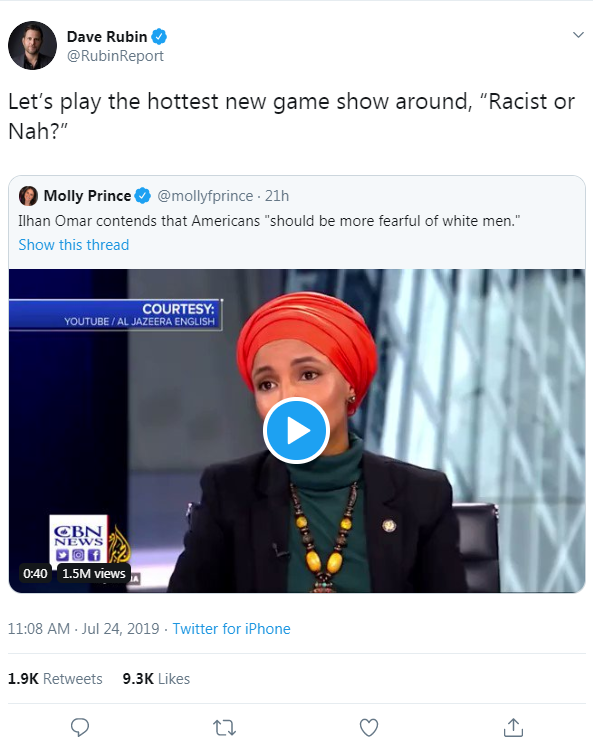 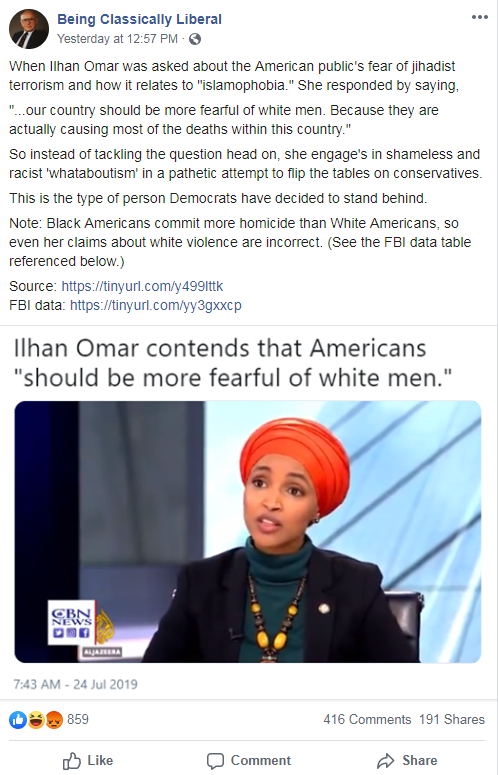 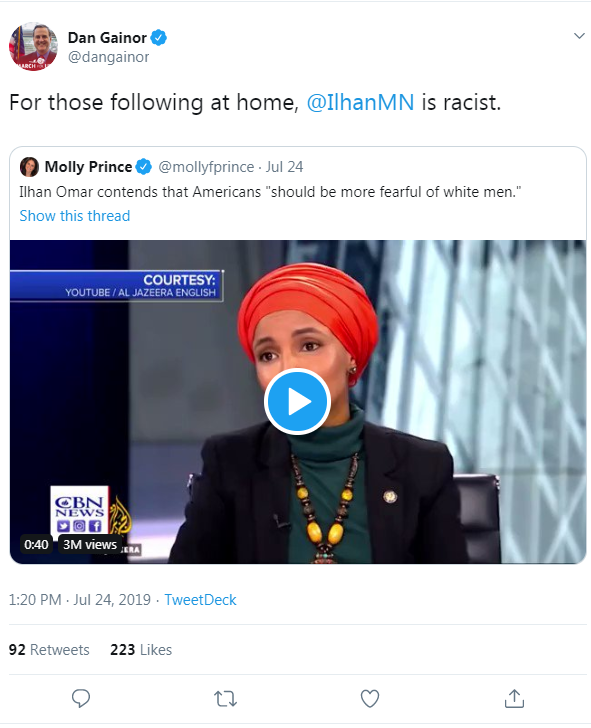 Later in the afternoon, Twitter account @QAnonPastryChef tweeted Prince’s video, writing that it showed Omar was “a dangerous racist & bigot” and including hashtags for the “QAnon” conspiracy theory. 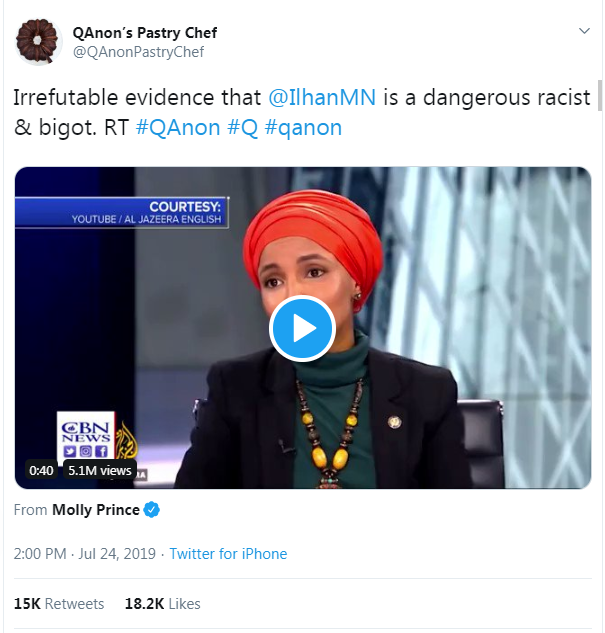 At around the same time, FoxNews.com published an article headlined “In resurfaced interview, Ilhan Omar answers question on 'jihadist terrorism' by saying Americans should be 'more fearful of white men.’” While the video and text of the Fox story included more of Omar’s answer, the misleading headline omitted that context, and the narrative continued to spread as the article was shared by other right-wing figures on Twitter and the subreddit “r/The_Donald.” On 8chan, “Q” also posted a link to the Fox article alongside a reference to “the POWER of Anon research,” suggesting Fox News found out about the remark from @QAnonPastryChef and causing more QAnon Twitter accounts with large followings to link to the article and echo “Q”’s claim. 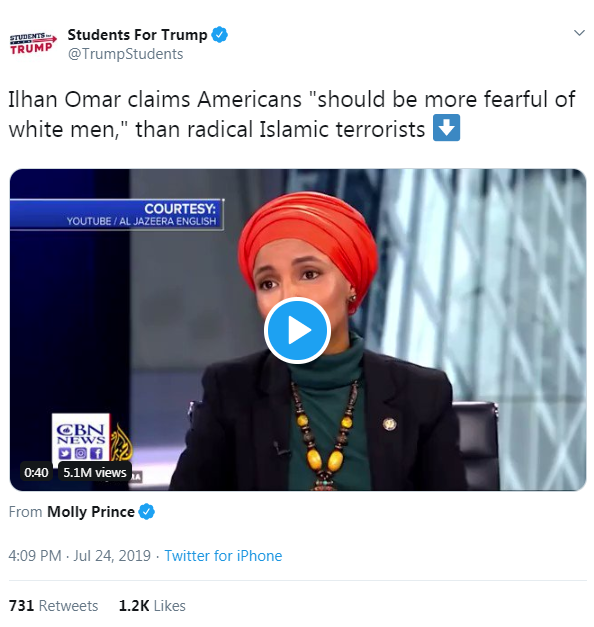 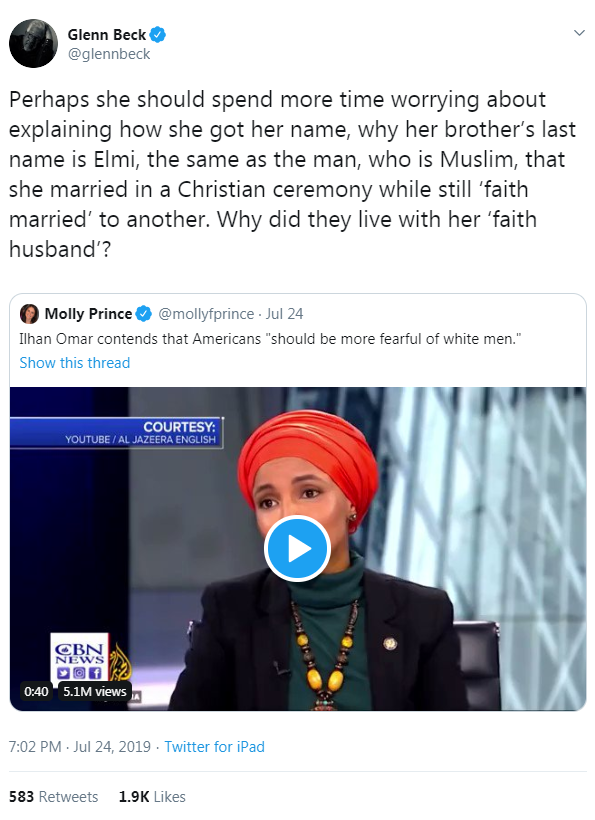 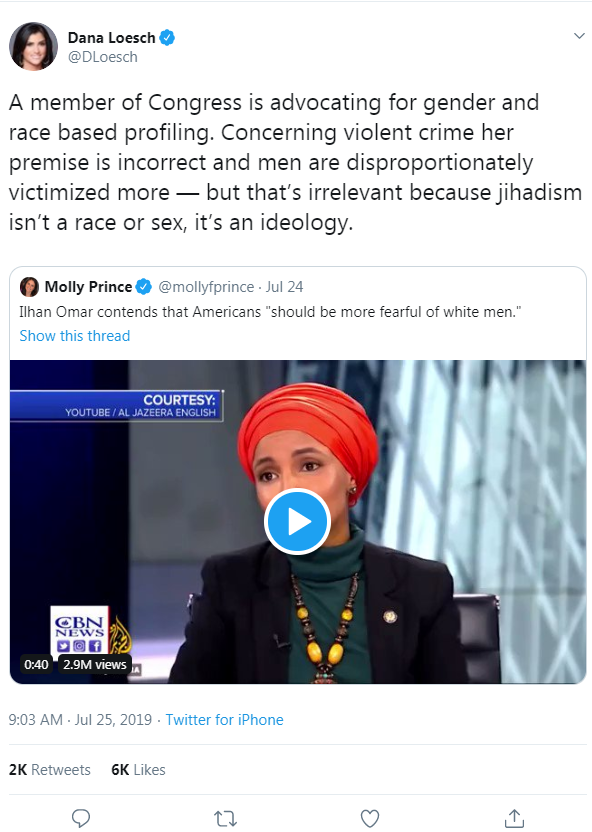 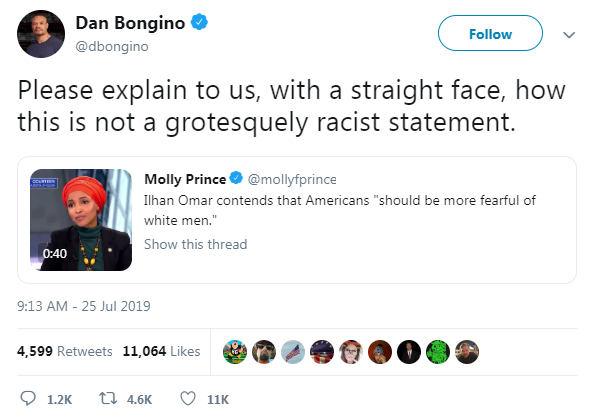 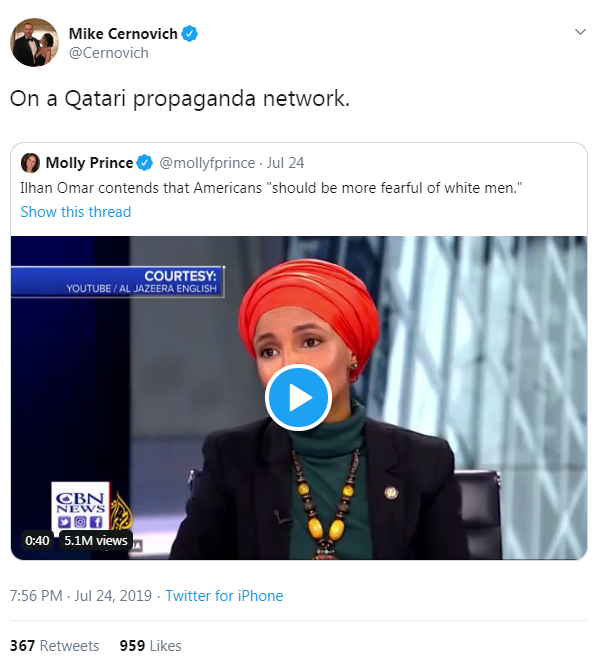 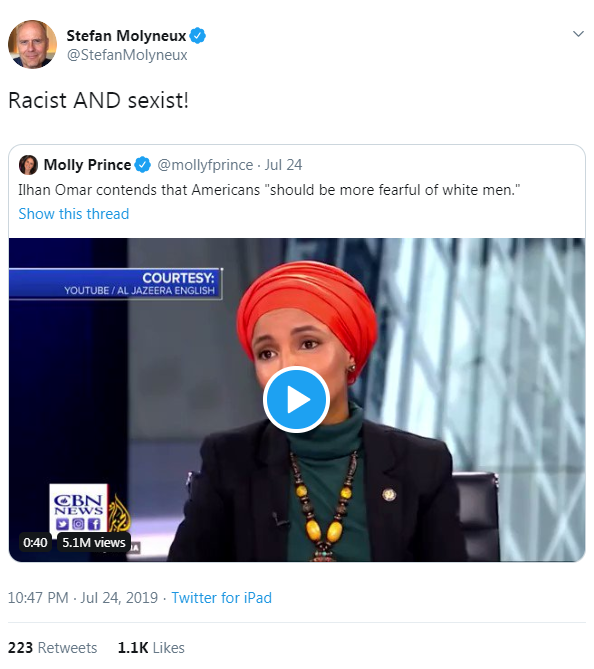 That afternoon, Sen. Marco Rubio (R-FL) tweeted Prince’s deceptive clip, writing, “I am sure the media will now hound every Democrat to denounce this statement as racist. Right?” CBN’s Brody hyped Rubio’s tweet, writing, “Waiting for the ‘mainstream’ media to report on this. Tick-tock tick-tock tick-tock.” Hasan called out Rubio for “sharing a selectively-edited video from my show,” and Rubio later released a statement defending his tweet, which also received pushback from some on Twitter. 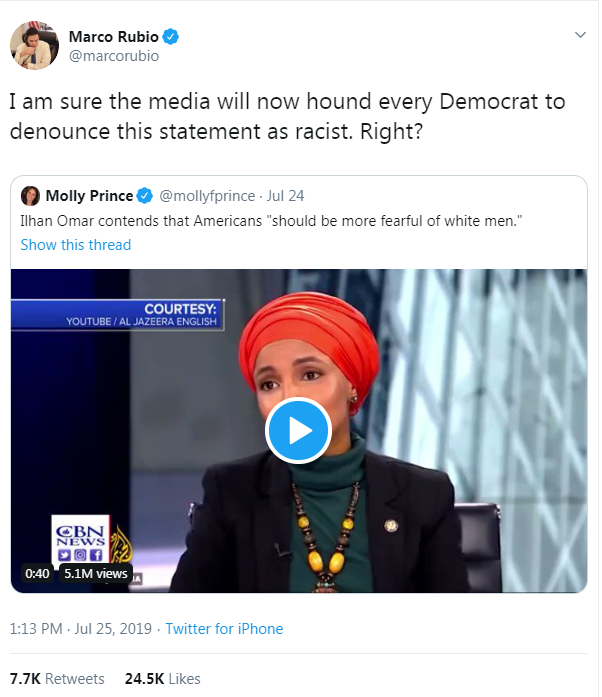 By the evening of July 25, all of Fox’s prime-time hosts -- Tucker Carlson, Sean Hannity, and Laura Ingraham -- used CBN and Prince’s framing of her answer on their shows, without mentioning the complete context of Omar’s answer.