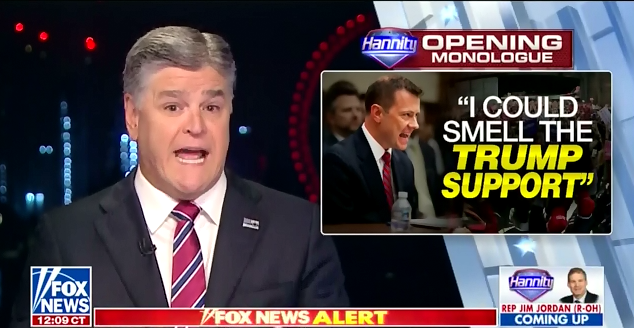 Months of breathless hype and absurd conspiracy theories in conservative media about supposed anti-Trump bias in the FBI culminated yesterday in a charade of a congressional hearing featuring FBI Special Agent Peter Strzok. Strzok answered questions for nine hours about his handling of the 2016 investigation into Hillary Clinton’s email server and the ongoing investigations into President Donald Trump and his campaign’s potential links to the Russian government. Afterward, Republican officials flocked to Fox News to declare victory, but neither could present any evidence that Strzok acted on the political beliefs expressed in his now-infamous text messages.

Strzok has been at the center of a firestorm largely manufactured by Fox News after text messages he sent to a colleague, with whom he was romantically involved, were publicly released by Department of Justice Inspector General Michael Horowitz. The texts expressed animus toward then-candidate Trump and concern for American national security should Trump win the presidency. Fox News and congressional Republicans have since selectively and deceptively hyped the texts, alternately leveling absurd and unfounded personal attacks against Strzok, the FBI, and the special counsel’s investigation into Russian interference in the 2016 election. Sean Hannity was especially outraged by Strzok’s characterization of Trump supporters in southern Virginia, saying Strzok referred to them as “smelly hillbillies that like Walmart” (the comments in question actually read, “Just went to a southern Virginia Walmart. I could SMELL the Trump support,” and “Loudon is being gentrified, but it's still largely ignorant hillbillys (sic)”).

According to a Media Matters review, Fox News helped congressional Republicans in advancing their baseless claims of bias by hosting seven Republican congressmen in the prime-time hours after the nearly 11-hour circus of a hearing. But even as Republicans and Fox News spiked the football, saying there was “evidence of a clear bias against Trump and for Hillary Clinton,” they failed to produce any concrete evidence that Strzok acted on his political beliefs. Moreover, Inspector General Horowitz has already issued a report noting, according to CBS News, that he “still did not think the Clinton probe was swayed for political reasons, as Strzok was not the sole decision-maker.” And the fact remains that in 2016, the FBI confirmed only one of its investigations into a presidential candidate in 2016 -- Hillary Clinton -- and that the only leaks that came out of the bureau in the run-up to the election about those investigations were about her, arguably hurting her and helping Trump win the election.

Even though Fox News is trying to pull out all the stops to assist Republicans in advancing a narrative around another charade investigation -- all in an attempt to curb the Russia investigation -- the special counsel’s investigation into potential collusion continues. The federal trial on “bank fraud and other financial charges” levied at Paul Manafort, Trump’s former campaign manager, begins on July 25, and prosecutors have asserted that the charges include a link to the Trump campaign.