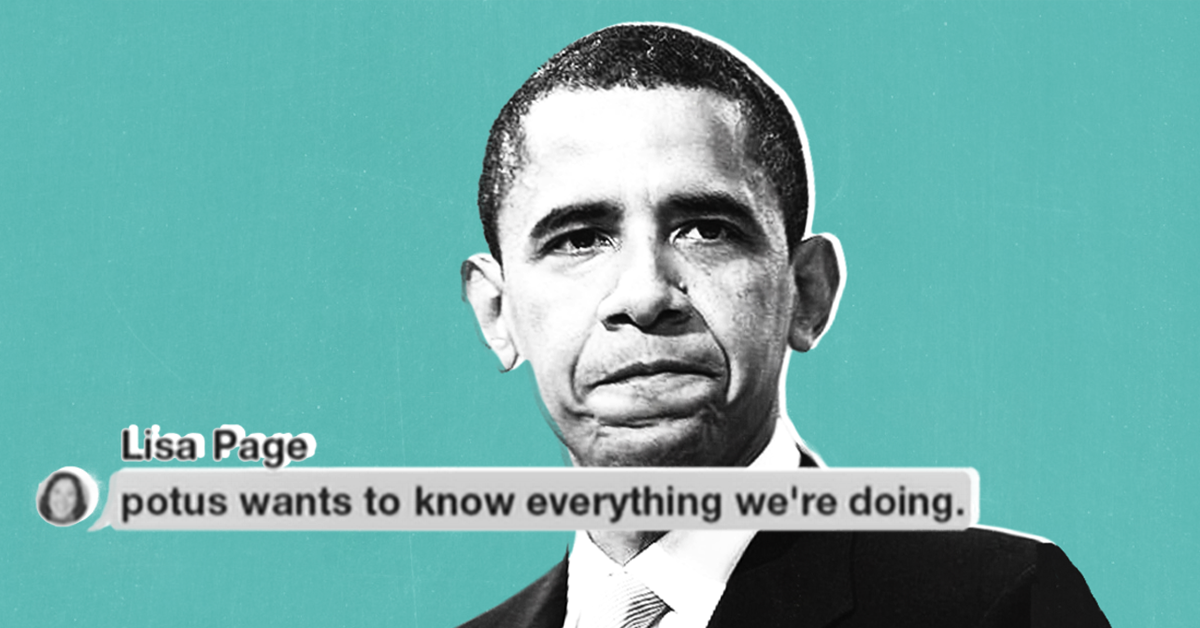 It started out as a “bombshell” alert. Text messages, according to Fox News, showed then-President Barack Obama might have been improperly involved in the Clinton email investigation. By midday, it had been debunked (the texts weren’t about the Clinton email investigation at all), but it morphed into a sad charade by the network to pretend that Obama being briefed about Russian interference into the election was somehow a scandal of its own.

Relentlessly pushing pseudo-scandals is Fox News’ bread and butter. The network essentially throws anything at the wall to see what sticks, and the Obama-FBI text message “scandal” is just the latest example. Here’s a breakdown of how Fox News messed up and is now trying to move the goalposts on its fraudulent claims.

At 6:00 a.m. on February 7, the Senate Homeland Security and Governmental Affairs Committee published an interim report titled “The Clinton Email Scandal And The FBI’s Investigation Of It,” prepared by committee Chairman Sen. Ron Johnson (R-WI). The report pointed to a text FBI lawyer Lisa Page sent to FBI Agent Peter Strzok about preparing talking points for then-FBI Director James Comey that read “Potus wants to know everything we’re doing.” The report claimed this text “raises additional questions about the type and extent of President [Barack] Obama's personal involvement in the [then-Secretary of State Hillary] Clinton email scandal and the FBI investigation of it." 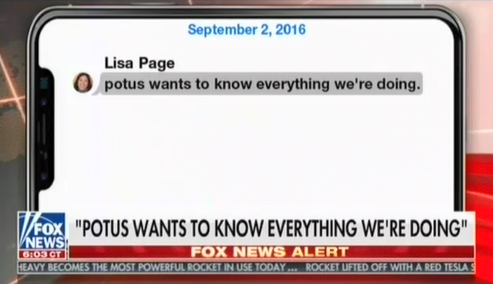 From the moment Fox’s morning show Fox & Friends started on February 7, it was clear there was a new “scandal” emerging in the network’s ecosystem. Co-host Steve Doocy opened the show with a “Fox News alert and a bombshell exclusive.” The bombshell: “New messages” that referenced Obama “now raising even more questions” about the Clinton investigation.

Doocy noted Johnson’s report and questioned, “Are they talking about Barack Obama? Does that mean he was involved in whatever they were doing? That's a bombshell.”

A bombshell it was not. But here’s how the story progressed on Fox News’ flagship morning show:

Brian Kilmeade: “There’s a story here at the very least, don’t you agree.”

Doocy: “New messages now raising even more questions about what the FBI and former President Obama knew about the Clinton investigation and when.”

Griff Jenkins: “We’re taking a look at this, and it is raising a lot of questions. And it’s shocking. … Investigators telling Fox News this now raises questions about President Obama’s personal involvement in the Clinton email investigation.”

Doocy (again): “Those text messages now raising even more questions about the FBI and perhaps President Obama’s involvement during the Clinton investigation of her email server.”

“Straight-news” coverage: Text messages “might suggest undue presidential interest and/or influence,” and “now we know it goes to the top.” 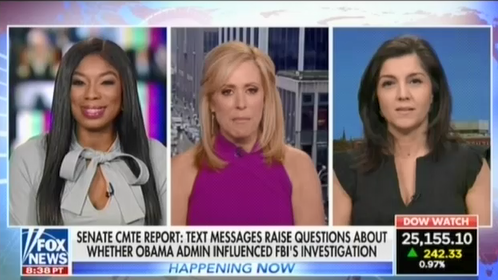 During the next show, Happening Now, Fox contributor Rachel Campos-Duffy stated that the text referring to POTUS “looks like it was about the Hillary Clinton investigation,” adding, “President Obama clearly had a stake in her being exonerated and Trump not winning the election.” She went on to say, “This is just like a mystery. It keeps unfolding and unfolding, and it gets dirtier and dirtier. And now we know it goes to the top.”

The debunks of Fox’s most recent “bombshell” began to roll out around noon. ThinkProgress, focusing on the timeline of events, called it “a total fraud.” Vox’s headline: “Trump says new FBI texts are a ‘bombshell.’ They’re not.” Even the Murdoch-owned Wall Street Journal poured cold water on the narrative being shouted on Fox News all day; according to the Journal, the text messages Fox used to suggest Obama had been “meddling” in the Clinton email investigation actually referred to the investigation into Russian interference in the 2016 U.S. election. CNN came to the same conclusion.

Running with a broken narrative: “There was some speculation” that the texts were about the Clinton email investigation, but that “is still up for debate.” 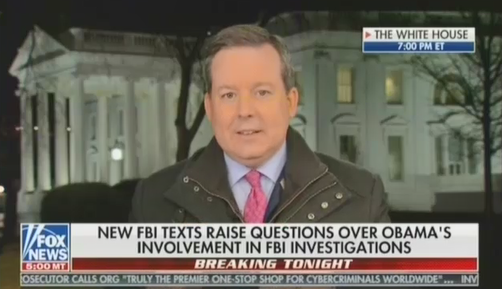 When the narrative that Fox News helped spearhead started to fall apart, the network’s hosts, guests, and anchors ran through a couple different plays. At first, they attempted to erase the network’s role in hyping and fueling the “bombshell report.”

On Special Report, guest host Shannon Bream brought up Obama and the FBI officials’ texts, noting, “There was some speculation that was about the Hillary Clinton email investigation, but now there’s talk that that was about the Russia potential collusion investigation, A.B. But it's now raising more questions and more criticism.” Panelist Mollie Hemingway also noted, “Initially, some people thought it had to do with the old Hillary Clinton email investigation.”

Note that neither of them mentioned it was the very network they were on that had invented the “speculation.”

Perhaps there is no better example of these acrobatics than Sandra Smith’s reporting on consecutive days. On Wednesday, Smith hyped “bombshell text messages” that were “rocking the FBI, revealing additional evidence of anti-Trump bias, and raising new questions about President Obama’s personal involvement in the Hillary Clinton email investigation.” On Thursday, she vaguely alluded to “a lot of conclusions drawn that these were exchanges about Obama wanting to know everything when it came to the Hillary Clinton email investigation which was closed at the time,” noting the Journal’s debunk that it was actually about Russian meddling.

Another tactic Fox tried was to claim that the details were “still up for debate.” During the 7:00 p.m. hour -- after the story had already fallen apart -- host Martha MacCallum introduced a segment on the topic, asking, “What was [Obama] keeping tabs on? That part of the story is still up for debate.” And correspondent Ed Henry noted the Journal’s debunk, but also argued that what the text message really referred to was “up for debate.”

Shifting the goalposts: A new, morphed scandal emerges from the debunked scandal 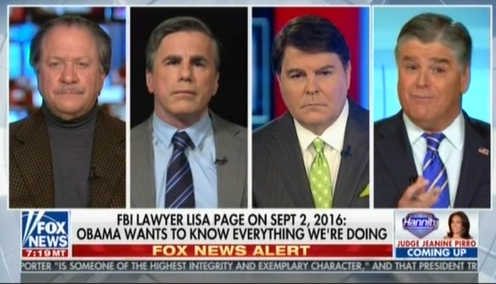 Lastly, Fox personalities shifted the goalposts. The initial scandal, that Obama supposedly was caught interfering in the Clinton email investigation, morphed into a different, supposed scandal, but one with the same cast of characters. Fox began arguing that, even if the text was referring to the investigation into Russian interference, that constituted a scandal on its own. Henry tried to make this case, saying, “Nonetheless, we should note that in April 2016, Obama insisted to our own Chris Wallace he never spoke to the attorney general or the FBI director about any pending investigations at all.” Hemingway used a similar tactic, stating “learning that it’s in fact about the Trump-Russia meddling election is far more interesting,” adding, “This is just, again, just a tiny part of a much larger scandal.”

Several of these tactics were also used on Sean Hannity’s show that night. Introducing the story with Judicial Watch’s Tom Fitton, Hannity noted, “Wall Street Journal says it was not about the email investigation, but from earlier comments I saw that you made, you have your doubts about that.” Fitton responded, “Pick your poison in terms of presidential involvement in these sensitive criminal investigations,” essentially arguing that, whether the text message was about Obama wanting to know about Clinton or Russia, it was bad either way.

By the following morning, the network had coalesced around this new narrative. Now, the scandal wasn’t that Obama was being informed about the Clinton email investigation; the scandal, somehow, was that Obama, the U.S. president and commander in chief, was being informed about the investigation into foreign interference in the upcoming U.S. election. Fox & Friends repeatedly used that argument during its February 8 edition, even bringing on Kellyanne Conway, counselor to President Donald Trump, to make the same (but new) argument. America’s Newsroom continued on with the new charade of pretending that Obama being briefed on the investigation into Russian interference was somehow a problem.

And so it continues.

It’s hard to keep track of all the pseudo-scandals that Fox News runs through in a given week. The network, especially on Fox & Friends and Hannity, puts out wild trial balloons to see what sticks. Sometimes, as with their fixation about the “secret society” scandal (which, incidentally, was started on Fox, also in part by Sen. Johnson), it blows up in their face. But as with any other good propaganda outlet, they don’t stop blurring the facts and insisting that there are still new “questions,” “concerns,” and “allegations” that need to be investigated -- even if the so-called scandal was already debunked.