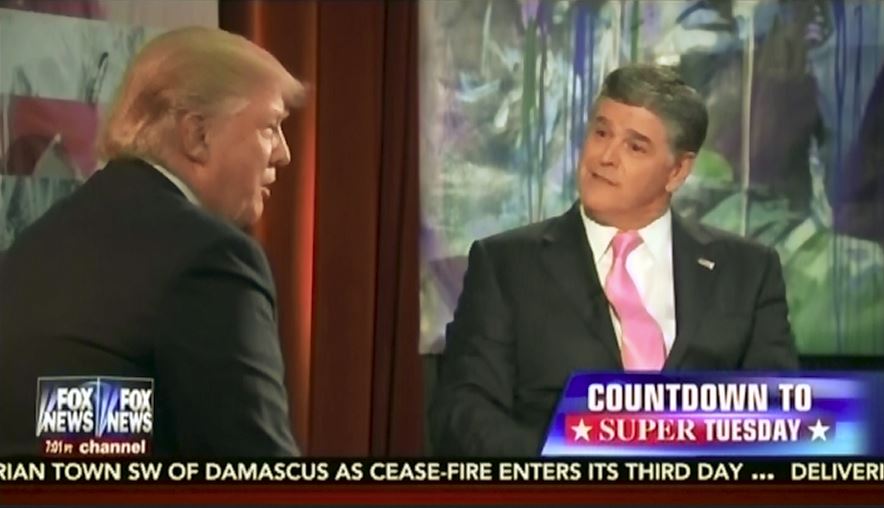 Fox's Sean Hannity responded to criticism of his coverage of GOP front-runner Donald Trump by publishing data showing that he has dedicated more than over four hours of interviews to Trump and Sen. Ted Cruz (R-TX) and more than 30 interviews to each on his Fox News show. Hannity also explained that his softball interviews were based on his agreement with the Republican vision, not a bias in favor of any one candidate.

In an April 11 piece, ThinkProgress pointed out that Trump has appeared on Sean Hannity’s Fox News show “an astonishing 41 times since he announced his campaign, giving him a nearly yearlong platform to target GOP voters. Conservative website RedState claimed ThinkProgress' report showed that Hannity “has become, for all intents and purposes, part of Trump’s campaign apparatus.”

Hannity’s executive producer, Lynda McLaughlin published an April 14 blog on his website responding to both pieces by highlighting the amount of total airtime he has given the all the Republican candidates:

To put this plainly, there is no conspiracy here to give one candidate more time over another. The candidates have an open invitation to come on the show, and it is their choice to take that offer or ignore it. Here is the breakdown of candidate times on the radio show since they announced through March of this year (limited to the last top 4 candidates):

Time on 'Hannity' TV Show since each candidate announced:

In an accompanying video, Hannity defended his softball interviews with Donald Trump and other candidates, claiming that ThinkProgress and RedState cherry-picked his interviews. Later Hannity admitted that he would interview Hillary Clinton “a hundred times harder than any Republican, because I believe the Republicans represent, and have a far better vision, one that I agree with, I just have less disagreement with them,” concluding “I'm not a journalist, I'm a talk show host” (emphasis added):

SEAN HANNITY: Here's a website, ThinkProgress, remember they did the structural imbalance of talk radio so many years ago? And then they did this hit piece, “Hannity Interviewed Donald Trump 41 Times, And Never Made News,” or something to that effect, which is just not true. And they picked some of the easier questions that I asked Donald Trump, which they could have done with any other candidate that I have interviewed. I'll be honest, I'm not sitting here -- If I'm interviewing Hillary Clinton, it's gonna be a hundred times harder than any Republican, because I believe the Republicans represent, and have a far better vision, one that I agree with, I just have less disagreement with them. I'm not a journalist, I'm a talk show host. I can't think of any question that has come up, that I have wanted to ask these candidates, that was relevant to ask these candidates, that I haven't asked them. I've asked them everything.

A Media Matters study found that in 2015, Hannity hosted 35 percent of all total interviews of Trump on Fox News. Hannity also gave Trump the vast majority of interviews compared to other GOP candidates in 2015 at 35 percent with over 8 hours of total airtime: