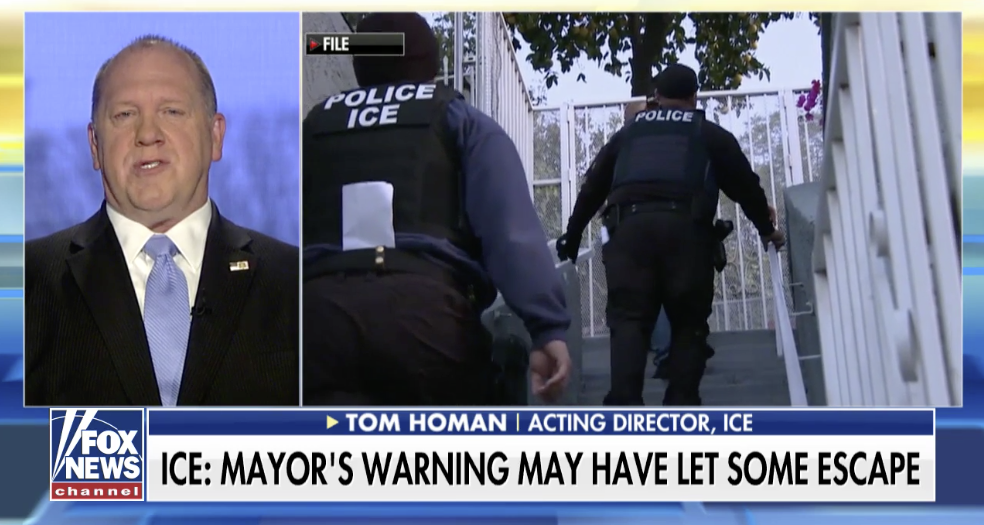 An Immigration and Customs Enforcement (ICE) spokesperson has resigned from his position after members of the Trump administration, including the agency's leadership, made false statements blaming the mayor of Oakland for over 800 individuals eluding an ICE raid. The disputed claim has been a central point of Fox News’ coverage of the Bay Area raid and of its subsequent criticism of Oakland’s mayor.

On February 24, Oakland Mayor Libby Schaaf warned residents about an impending ICE raid in California's Bay Area, advising immigrant families to seek assistance and learn their rights. Several days after the raid, which resulted in 232 arrests, ICE issued a statement quoting acting director Thomas Homan, who blamed Schaaf for the operation not resulting in more arrests. Attorney General Jeff Sessions later pointed to the statement in a speech. According to ICE's press statement (emphasis added):

“The Oakland mayor’s decision to publicize her suspicions about ICE operations further increased that risk for my officers and alerted criminal aliens – making clear that this reckless decision was based on her political agenda with the very federal laws that ICE is sworn to uphold,” said ICE Deputy Director Thomas D. Homan. “Thanks to the dedicated and professional work of ICE deportation officers, we were able to remove many public safety threats from the streets of the Bay Area during the past few days. However, 864 criminal aliens and public safety threats remain at large in the community, and I have to believe that some of them were able to elude us thanks to the mayor’s irresponsible decision.”

Homan appeared on Fox & Friends on February 28 to again blame Schaaf, saying, “There’s 800 [criminals] that we were unable to locate because of that warning.” Homan also likened the mayor to “a gang lookout yelling 'police' when a police cruiser comes in the neighborhood.”

But according to the (now former) San Francisco spokesperson for ICE, Homan’s claim is false. The San Francisco Chronicle reported on March 12:

The San Francisco spokesman for U.S. Immigration and Customs Enforcement resigned after the agency’s recent Northern California sweep, saying he couldn’t continue to do his job after Trump administration officials made false public statements about a key aspect of the operation.

James Schwab told The Chronicle on Monday that he was frustrated by repeated statements by officials, including U.S. Attorney General Jeff Sessions, that roughly 800 undocumented immigrants escaped arrest because of Oakland Mayor Libby Schaaf’s Feb. 24 warning to the public about the four-day operation, issued the night before federal officers began staking out homes and knocking on doors.

Schwab wanted the agency to correct the number, which he understood to be far lower, and didn’t want to deflect media questions about it, he said.

“I quit because I didn’t want to perpetuate misleading facts,” said Schwab, 38, who was hired in 2015 and resigned last week. “I asked them to change the information. I told them that the information was wrong, they asked me to deflect, and I didn’t agree with that. Then I took some time and I quit.”

Fox News today is still pushing Homan’s claim that Schaaf is to blame for individuals getting away. The network has yet to note that ICE’s San Francisco spokesman quit after disputing that very claim.