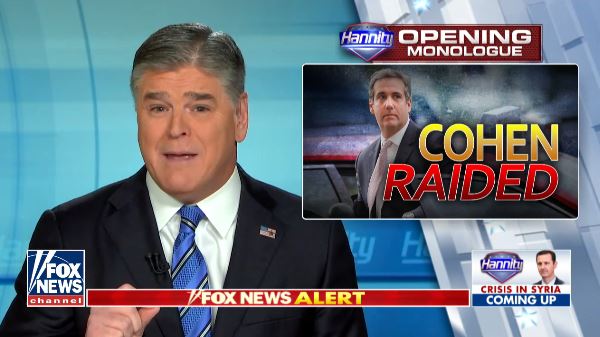 For four days last week, Sean Hannity attacked the April 9 FBI raid of Trump attorney Michael Cohen’s office and hotel room, all without disclosing that he is also a legal client of Cohen, as Cohen’s lawyers disclosed in federal court today.

The New York Times reported that FBI agents were looking for records of payments to two women who say they had affairs with President Donald Trump years ago, Karen McDougal and Stephanie Clifford (also known as Stormy Daniels). They were also reportedly looking for communications between Trump and Cohen about a leaked Access Hollywood tape and records about Cohen’s taxi medallion business. Days later, CNN broke the news that the FBI seized recordings Cohen made of conversations with a lawyer who once represented both women. The Washington Post reported that Cohen is being investigated “for possible bank fraud, wire fraud and campaign finance violations.”

The disclosure that the Fox News host is a client of Cohen was made by one of Cohen’s attorneys in court today, after Cohen’s lawyers said they contacted Hannity and he had not authorized the release of his name. Nonetheless, the court ordered Hannity’s name disclosed. As Politico explained, Hannity (and his guests) repeatedly criticized the raids without disclosing his own connection to Cohen until after it was made public in court.

Hannity dedicated multiple segments of his Fox primetime show to criticizing the raid on Cohen each night from April 9 through April 12 (he spent the entire April 13 edition of his show covering Trump’s airstrikes on Syria.) Here's exactly what he said:

Hannity opened his show by saying the Michael Cohen raid is a declaration of “a legal war on the president.”

SEAN HANNITY (HOST): And this is a Fox News alert. President Trump's long-time personal attorney, Michael Cohen, just had his office, his home, and his hotel that he was staying in raided by the FBI today in an early morning raid. Now, what that means is Mueller's witch-hunt investigation is now a run away (sic) train that is clearly careening off the tracks.

HANNITY: All right. Tonight, we have explosive new chapter in Mueller's partisan witch-hunt. Now, we have now entered a dangerous phase and there is no turning back from this.

Now, keep in mind. Cohen was never part of the Trump administration or the Trump campaign. This is now officially an all hands on deck effort to totally malign and, if possible, impeach the president of the United States. Now, Mueller and Rosenstein have declared what is a legal war on the president.

GREGG JARRETT( FOX NEWS LEGAL ANALYST): I think the president was right to be frustrated and angry. Americans should be outraged. This is an abuse of the system.

You know, here you have an attorney general who should never have recused himself and seems to be rather incompetent on the matter. You've got corrupt acts by top officials at the FBI and you've got Rosenstein and Mueller who have abused the law and today was a perfect example of this.

Hannity said the Cohen raid was a declaration of “all-out political war against this president” and advised Trump to continue attacking Mueller and cease any negotiations with him.

SEAN HANNITY (HOST): The so-called investigation to Russia collusion, it is now officially moved beyond its mandate into a political takedown of the president you elected, and it seems by any means necessary. Now, just a minute, we will uncover the shocking unfair two-tiered justice system in this country and we'll show you just how abusively biased and corrupt Mueller and his team of investigators are and that they have now declared an all-out political war against this president.

Frankly, the president needs to immediately start advancing the truth about who Robert Mueller is, what his mandate was, how far beyond his mandate is and about his entire team of Democratic donors. And, frankly, any negotiations that were going on with the president talking to Robert Mueller, that should probably likely end if it hasn't already, and the president and his legal team should be preparing to take this all the way to the United States Supreme Court. That's where we are tonight.

Hannity and Jarrett agreed that the Cohen raid was a “trap” to provoke Trump into doing something rash.

SEAN HANNITY (HOST): Gregg, I'll start with you. You have referred to the seizing of Michael Cohen's attorneys as an affront to our legal system and our justice system.

GREGG JARRETT (FOX NEWS LEGAL ANALYST): And it shows just how unprincipled Robert Mueller and Rod Rosenstein are. You know, they knew it was outside the scope of the authority of the special counsel, so they gave it to somebody else to do their dirty work. I suspect this was an effort to provoke the president into doing something [rash] that would hurt himself. But he's too smart for that, he's not going to do that.

But -- think about what's it at risk here.

JARRETT: It's surely a trap, as is a trap of sitting down with Robert Mueller to answer questions.

Wannabe Trump lawyer Joe diGenova told Hannity the Cohen raid shows Rod Rosenstein and Mueller are “using a grand jury to terrorize people” and it’s “an abuse of power” that Rosenstein should be fired for.

JOE DIGENOVA: Look, I must tell you, I find this raid of Mr. Cohen's office so appalling in every sense -- legal, ethical professional responsibility. What Rod Rosenstein and Bob Mueller have done is weaponized in an unconstitutional way the criminal investigation process which should be sacrosanct.

And what they have done is they have conducted and are conducting now something that is called an in terrorem grand jury. They are using a grand jury to terrorize people. That is an abuse of power. Mr. Rosenstein is responsible for it.

And while I agree with Alan wholeheartedly that Mr. Rosenstein cannot possibly ethically participate in this, it will make no difference to him because he now has an animus toward the president of the United States, which disqualifies him from the performance of his duties and Jeff Sessions should fire him tomorrow morning.

Hannity said that the Cohen raid is “what we expect in Venezuela.”

SEAN HANNITY (HOST): All right as we continue with Joe diGenova and professor Alan Dershowitz, these tactics are not American. That's the point. This is -- this is what we expect in Venezuela. This is not the United States or anything.

Hannity cited the Cohen raid to smear Mueller’s investigation as an “overreaching witch hunt” and complained that liberals weren’t standing up for Cohen’s rights.

SEAN HANNITY (HOST): Now, we turn to some other developments, including those surrounding Robert Mueller's overreaching witch hunt. Former Federal Election Commission chairman, his name is Bradley Smith, he's a Republican appointed by President Clinton, is throwing cold water on the notion that Michael Cohen could or should be charged with a crime in connection to this whole Stormy Daniels payment.

So, now, it's actually moved into Stormy Daniels and Karen McDougal and the “Access Hollywood” tape and worse. And raiding the home of the president's personal attorney to find those issues, not about Russia -- at some point, I am wondering where is the left in this country? Where are the civil libertarians in this country?

All transcripts are from the Nexis database.