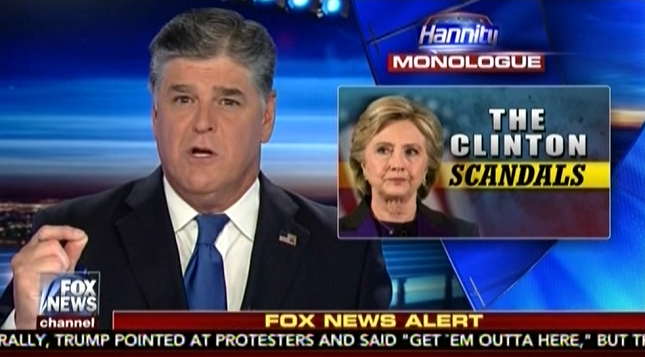 Senate Majority Leader Mitch McConnell (R-KY) announced on July 24 that the Senate would be holding a vote on whether to proceed to debate on the various Republican proposals to repeal and, in some cases, replace the Affordable Care Act (ACA), which have been projected to take away health care from upward of 22 million people (“straight repeal” would strip away insurance from 32 million). On July 25, the Senate narrowly approved a motion to proceed to debate and then rejected the first plan McConnell put up to a vote.

Despite the new actions on health care, Fox News’ prime-time shows focused nearly as much on bogus Clinton scandals and political intrigue as they did on health care on July 24 and July 25. A Media Matters analysis found that Fox’s prime-time line-up of Hannity, The Five, and Tucker Carlson Tonight spent 35 minutes and 49 seconds discussing health care while devoting 34 minutes and 56 seconds to discussions of the Clintons.

Of the three programs, Hannity’s coverage, unsurprisingly, was the most skewed. Over the two-day period, Hannity spent 13 minutes and 4 seconds on health care while devoting 30 minutes and 42 seconds to the Clintons. Even as senators were taking votes on health care, Hannity ran two full segments on the Clintons and spoke about health care in brief spurts of less than two minutes throughout the show.

Meanwhile, while the Senate was voting on health care, Tucker Carlson avoided discussing it at all. On the July 25 edition of Tucker Carlson Tonight, the host went live to President Donald Trump’s rally in Ohio for 10 minutes and 57 seconds. Carlson did manage to spend 17 seconds on health care during his July 24 broadcast, which was mainly a video of Trump lamenting Obamacare.

Instead of covering health care or the Clintons, Carlson focused his attention on stories that were either offensive or non-urgent.

Unlike the other prime-time shows, Fox News’ The Five spent a significant amount of time discussing the health care bills. But the hosts also made time for a segment on Democrats criticizing Hillary Clinton.

The amount of time spent on Trump’s rally was calculated by monitoring it from beginning to end on Tucker Carlson Tonight.