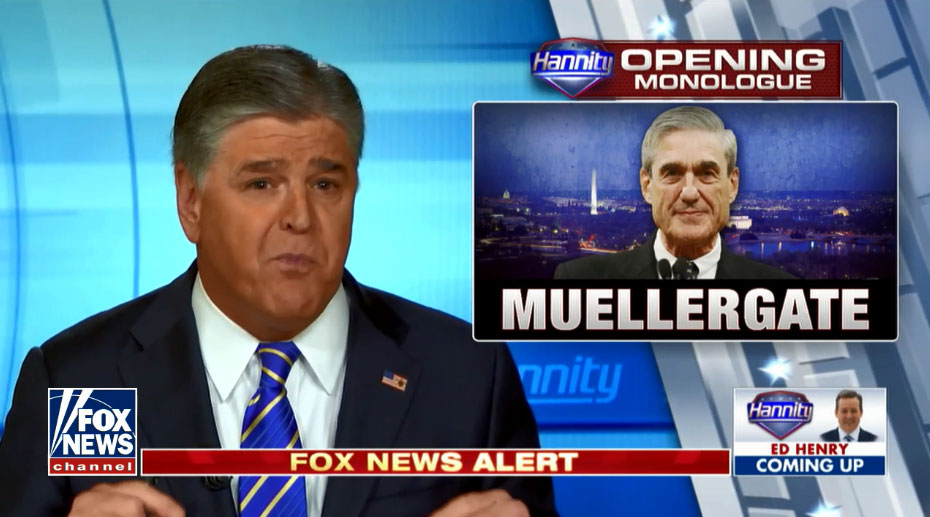 Republicans on the House Intelligence Committee voted on January 31 to release a memo, written by Rep. Devin Nunes (R-CA), which they claim shows partisan abuse of power on the part of the FBI to obtain a FISA warrant. The full four page text of the memo was released on February 2 and, led primarily by Fox News host Sean Hannity, right-wing media figures have used its contents to slam, discredit, and call for the firing of both special counsel Robert Mueller and U.S. Deputy Attorney General Rod Rosenstein.

Fox host Sean Hannity claimed that Mueller “never should have been appointed based on what we know tonight” and that “he needs to go, yesterday.” He also called the investigation “a witch-hunt from the very beginning” and called for charges against former Trump campaign chairman Paul Manafort and former national security adviser Michael Flynn “to be dropped.” Hannity also declared the investigation an attempted “coup” and “an attempt to unseat an elected president” based on the memo.

Right-wing author Ann Coulter tweeted, “Rosenstein should be fired for opposing the release of the memo.”

Conservative radio host and frequent Fox guest Dan Bongino tweeted that Rosenstein “STILL” has a government job despite being one of the “central figures in the most significant political spying scandal in US history.”

Tea Party Patriots tweeted, “It's time for DAG Rod Rosenstein to do his job or resign!”

Tom Fitton, frequent Fox guest and president of Judicial Watch, said Rosenstein “has some explaining to do” and that “it’s fair to ask whether he’d be fired.” Fitton also told Fox host Harris Faulkner that the probe is subject to “being called off now by the Justice Department.”

Fox legal analyst Gregg Jarrett tweeted that a “source” told him Rosenstein in a meeting with Nunes “threatened to subpoena the texts and emails of Congress,” and called for Rosenstein to “resign or be fired” if true.

Fox News host Todd Pirro asked former Trump aide Corey Lewandowski if “it's time for Rod Rosenstein to go.” Lewandowski responded that Rosenstein's involvement with the FISA application “should give people in the Justice Department grave concern ... and Rod needs to answer for those questions.”

Conservative radio host, Townhall columnist, and birther Jeff Crouere wrote, the memo showed Mueller is “investigating the wrong administration” and claimed Mueller was “compromised from the very beginning of his probe.” Crouere went on to call for an end to this “witch hunt” after the release of the “bombshell memo.”

Conservative radio host Rush Limbaugh alleged that the memo means Mueller is investigating the wrong people “on purpose,” and called the FBI's activities a “Democrat-run operation.”