As advertisers continue to drop Sean Hannity’s Fox News show, most recently in response to his defense of the Republican Alabama senatorial candidate accused of molesting a 14-year-old, Hannity has decided to fuel and help organize a boycott of Keurig, one of his former advertisers. But he may be digging himself into a deeper hole, as he is now promoting the boycott efforts of known white supremacists and extremists.

On November 11, Keurig, a coffee-maker brand, announced it was dropping Fox’s Hannity in response to Hannity’s irresponsible defense of Roy Moore and attacks on victims who come forward with their stories of sexual harassment and abuse. After Hannity ginned up outrage that evening, his supporters responded with a #BoycottKeurig campaign, which apparently entails angry fans destroying their Keurig coffee makers, filming the process, and uploading the result to the internet. Hannity gleefully egged on and encouraged the boycott against his former advertiser (which remains a Fox News advertiser) by promising giveaways to the best #BoycottKeurig videos and by retweeting and amplifying his Keurig-smashing supporters, including one that promoted actual white supremacist Angelo John Gage. 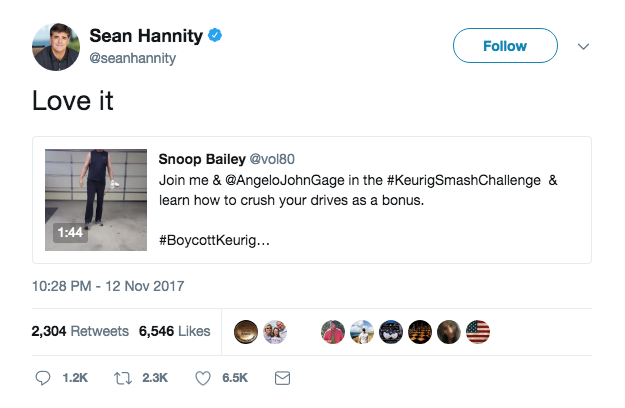 As documented by the Southern Poverty Law Center (SPLC), Gage is a white nationalist known for “making YouTube videos warning of ‘white genocide’ [and] leading his youthful band of white nationalists on college campuses to protest the Marxist takeover of American higher education.” In 2015, Gage served as the chairman of the “youth wing of the radical-right … American Freedom Party." Gage has also appeared on Radio 3Fourteen, a production of Red Ice TV, a white supremacist and anti-Semitic online media outlet that promotes Holocaust denial. On his own YouTube channel, Gage has passionately defended the Unite the Right rally in Charlottesville, VA, saying, “I don’t care if Hitler was at the rally.”

In his feverish promotion of the Keurig boycott, Hannity also amplified a piece of content from the far-right website The Red Elephants, characterizing it as “so so funny!” The piece was written by Vincent James (also known as Vincent James Foxx), who appeared in a video that features threats of killing left-wing protesters.

The Red Elephants’ Twitter account habitually traffics in white supremacist memes (like the promotion of the message board-originated “it’s OK to be white” campaign that supposedly seeks to expose anti-white racism) and racist tropes like claiming “race and IQ correlate.” @TheRedElephants also engages with known white nationalists like Timothy Gionet -- known online as Baked Alaska -- and dabbles in conspiracy theories, like promoting the false claims that Democratic operatives ran a pedophilia ring under a family restaurant in D.C.

All in all, Hannity might not be making the best case for himself that he’s a commercially stable and reliable person to advertise with.