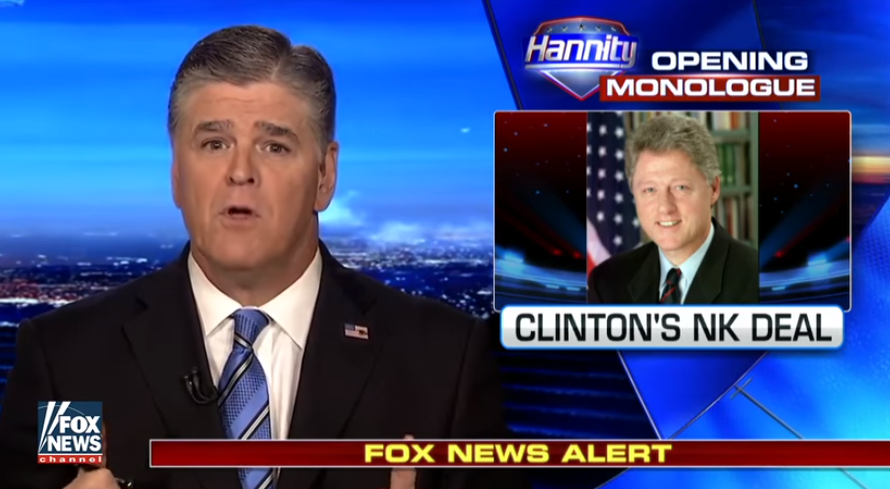 For months, Fox News host Sean Hannity has falsely disparaged the Agreed Framework of 1994, a deal brokered under President Bill Clinton to freeze North Korea’s nuclear program, as an example of the U.S. “sucking up and bribing world dictators.” Now, experts are criticizing the terms of President Donald Trump’s agreement with North Korea dictator Kim Jong Un for conceding more than the 1994 agreement did and for being weaker on denuclearization. But, as expected, Hannity has been praising Trump and the agreement he signed with Kim, saying their summit “exceeded all … expectations.”

The joint statement that Trump and Kim signed on Tuesday fell short of the U.S. demands going into the summit; the deal does not include standards for complete, verifiable, and irreversible denuclearization as the U.S. hoped, and Trump offered a concession to the North Koreans by suspending U.S. military exercises with South Korea.

A number of experts have criticized the deal, saying it provides even weaker terms than did previous deals, including the Agreed Framework, which, unlike the joint statement signed today, required wide-ranging inspections but ultimately fell apart when North Korea was suspected of cheating.

Wendy Sherman, a top negotiator with North Korea in the Clinton and Obama administrations, told The New Yorker, “The document not only doesn’t break new ground—it is less than previous documents, including the 1992 Joint Declaration, the Agreed Framework of 1994, and the September, 2005, Joint Statement of the Six-Party Talks.” Ex-CIA officer Bruce Klingner, who is now a Northeast Asia senior research fellow at the conservative think tank the Heritage Foundation, wrote on Twitter, “This is very disappointing. Each of the four main points was in previous documents with NK, some in a stronger, more encompassing way. The denuke bullet is weaker than the Six Party Talks language. And no mention of CVID, verification, human rights.”

Even Fox News contributor Ari Fleischer bemoaned the deal’s similarities to the Agreed Framework. But The Washington Post’s Glenn Kessler aptly noted that the U.S. did not suspend military exercises in South Korea under that deal. The Wall Street Journal’s Mary Kissel also categorized Trump’s concession as a misstep compared to the terms of the Agreed Framework.

But these details have been lost on Trump sycophant Sean Hannity, who has said in the months leading up to the summit that Trump is “not naive like Bill Clinton” and would therefore not be “duped” into appeasement:

And this morning, Hannity’s astounding propaganda was again on full display. He insisted that the summit “had exceeded all of their expectations” and compared Trump’s deal to the Agreed Framework, saying, “The president gave up nothing. There wasn’t a penny paid like Bill Clinton when he made a deal with Kim Jong Un’s father.” The latter statement, which Hannity has breathlessly repeated, is misleading at best; the 1994 agreement did not include payments to North Korea, though it did state that the U.S. would build two light-water reactors in North Korea in order to make it harder for the country to produce weapons-grade material.

And this is not the first example of Hannity’s agenda-driven hypocrisy on North Korea talks. Earlier this year, Media Matters documented the contrast between Hannity’s fawning coverage over the announcement that Trump would meet with the North Korean dictator and his impassioned condemnation of President Barack Obama when he was considering meeting with Kim Jong Il.