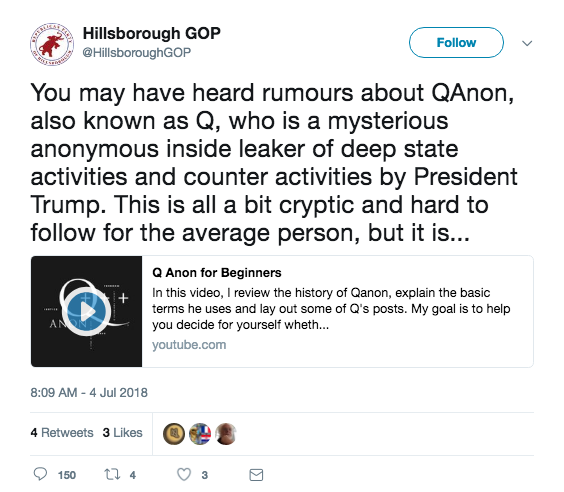 Supporters of the QAnon (also known as “The Storm”) conspiracy theory baselessly believe that President Donald Trump’s cryptic October 2017 comment alluding to a “calm before the storm” was in reality a hint at a master plan he has set in motion to kneecap members of the “deep state” while dismantling pedophilia rings supposedly tied to powerful celebrities and politicians. Anonymous posts on anonymous internet forum 8chan signed by “Q,” who claims to be “a high-level government insider with Q clearance,” set “The Storm” in motion. Trump supporters claim the posts are clues informing the public of Trump’s plan, shared on the message board to circumvent what they believe is mainstream media’s anti-Trump agenda.

8chan, when not the source of this wild conspiracy theory, is best-known as an online message board connected to hoaxes and organized harassment campaigns.

These conspiracy theories matter. “Pizzagate,” a similar pedophilia-focused conspiracy theory fueled by far-right media during the 2016 presidential election inspired a shooter to open fire inside a Washington, DC, family restaurant. Not only can the same happen again, it has already started. A man is facing terrorism charges in Arizona for just recently using an armored vehicle to stop traffic on a bridge near the Hoover Dam. His demands and his letters have both been linked to the QAnon conspiracy theory. And now that conspiracy theory has been endorsed by an element of the Republican party.

Here's a screenshot of a local GOP party promoting the QAnon conspiracy theory, since they've deleted the tweet pic.twitter.com/TlRiw25T1C