Fox News host Sean Hannity, one of President Donald Trump’s most fervent supporters and an unofficial presidential adviser, has some new fans: followers of the the QAnon conspiracy theory. Interest in Hannity's show spiked on a prominent QAnon message board after the pseudonymous “Q” endorsed the broadcast. QAnon believers are celebrating Hannity for promoting themes following the conclusion of special counsel Robert Mueller’s Trump-Russia investigation that they say echo their own.

The conspiracy theory centers on an anonymous account claiming to be a high-level government official with “Q” security clearance. The account posts cryptic messages on 8chan’s “/qresearch/” forum, and followers obsess over the “Q” posts by decoding and documenting them to spin major news stories into evidence of either a plot against Trump and his supporters or of pro-Trump victories against the “deep state.” Some followers of the QAnon conspiracy theory have allegedly engaged in deadly violence, and others have reportedly threatened to kill YouTube employees and even Trump himself.

Hannity has a long record of pushing conspiracy theories and misinformation, and for the last two years his show has revolved around the baseless notion that Mueller's probe was the result of a “deep state” conspiracy to remove Trump from office. And last week, the account posting as “Q” twice urged its followers to tune in to Hannity’s shows. On the March 25 edition, Hannity repeated his regular attacks on the “deep state,” which fit similar narratives as those posited by the QAnon conspiracy theory: There’s a corrupt, criminal “deep state” hellbent on ousting the president, but that Trump is outsmarting its members.

In 8chan posts, “Q” urged followers to tune in to Hannity 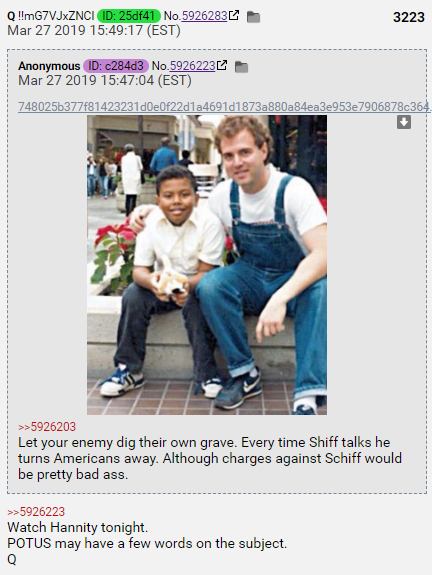 Some of Hannity’s arguments have overlapped with the narratives that QAnon followers have built around the cryptic 8chan posts by “Q.” As researcher Travis View has described, the conspiracy theory revolves around Trump “secretly battling a corrupt deep state and an evil cabal of pedophile Satan-worshiping elites.” The narrative also puts Trump in a larger scheme to prosecute Democrats, Obama administration officials, and others who are supposedly trying to lead a coup against the White House. Since Mueller was appointed special counsel in May 2017, Hannity has criticized the probe over and over again, demanded investigations of those in the “deep state” against Trump, and said he has “sources” claiming that it would happen soon.

On the “Q”-endorsed March 25 show, Hannity’s talking points were nothing outside of what's ordinary for him, in that in discussing Attorney General William Barr’s letter to Congress that claimed Mueller did not establish collusion between Trump’s campaign and Russia and that the Department of Justice concluded there isn’t enough evidence to charge Trump for obstruction of justice, he said, “This must be a day of reckoning for the media, for the deep state.”

He also railed against the “abuse of power” by certain officials at the FBI, adding that the probe into Hillary Clinton’s use of private email server during her time as secretary of state must be reopened “if we are to ever have justice in this country.” He also claimed, “Sources are telling me it's all about to come cascading down.”

Additionally, Hannity called House Intelligence Committee Chairman Adam Schiff (D-CA) “cowardly” and a “national disgrace.” He also hosted Fox contributor Newt Gingrich, who claimed there was a “deep state-news media joint conspiracy to protect Hillary Clinton and to destroy Donald Trump” and called it “one of the sickest moments in American history.”

QAnon followers tuned in to Hannity and reacted positively

The endorsement from “Q” caught its followers’ attention. Media Matters analyzed 8chan’s “/qresearch/” board for mentions of “Hannity” since August 2018 and found a major spike after the two “Q” endorsements: In the first 48 hours after both “Q” endorsements, there were more than 1,000 posts that included the word “Hannity.” The second largest jump in mentions of Hannity on the board happened on March 18 and 19, with more than 350 posts including his name, after he hosted Rep. Devin Nunes (R-CA) and complained that Clinton was “getting a pass.”

Based on a Media Matters analysis of posts on the “/qresearch/” forum, many QAnon followers noticed the similarities between their pet narratives and Hannity’s talking points. During and after Hannity’s March 25 show, QAnon followers praised the Fox host, lauding his claims and suggesting that he was coordinating with “Q,” claiming that “Q is Hannity’s producer,” and writing that Hannity was “acting as a mouthpiece for Q’s message.” 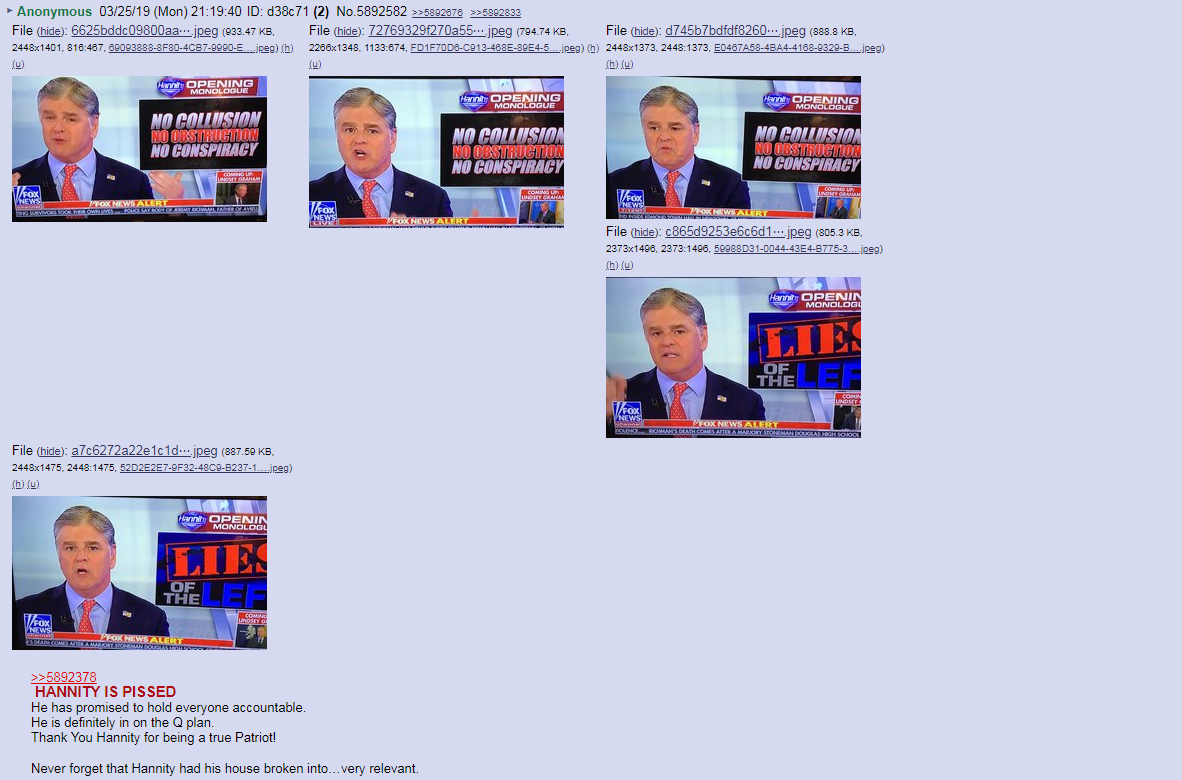 “Q”’s endorsement of Hannity also comes at a time when Fox figures have increasingly winked at the QAnon conspiracy theory, even though there’s ample evidence of its dangerous ramifications. On March 22, Fox & Friends First featured a tweet from a major QAnon follower:

On the same day as the first “Q” post about Hannity, Fox White House correspondent Kevin Corke tweeted an image of a coffee cup with “Q” written on it and liked dozens of responses containing “pro-QAnon messages.”

Kevin Corke, a White House correspondent for Fox News, tweeted a picture of a coffee cup with a Q written on it.

When someone asked if Corke would “ask 'the question'” (meaning, ask Trump about QAnon), Corke responded with a flexed bicep emoji. pic.twitter.com/VdXISqfVgs

In August, Fox & Friends hosted a QAnon believer who had posted on Facebook a “Q” post claiming that the Parkland, FL, mass shooting was fake. 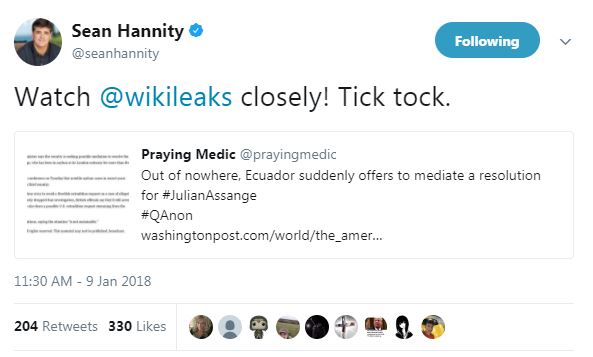 Fox News contributor Sara Carter retweets praise from QAnon follower for having a piece of hers being “Q'd.” (h/t @jaredlholt) pic.twitter.com/dllh8uvVSe

Such potential nods to the conspiracy theory may help Fox get viewers, but as the Pizzagate shooting has shown us, giving credence to far-right misinformation is incredibly dangerous.