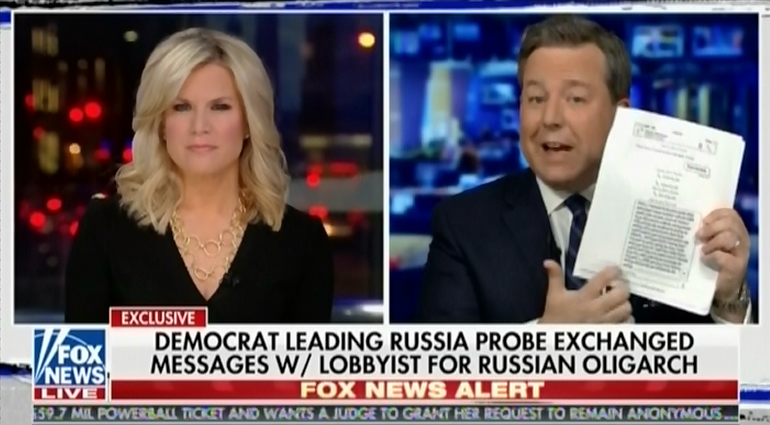 On January 29, The Daily Beast’s Ben Collins reported that, after Fox News host Sean Hannity’s Twitter account briefly “disappeared,” Julian Assange unknowingly messaged an account posing as Hannity, presumably under the impression that the account was authentic. In the direct messages, Assange suggested the parody Hannity account send messages “on other channels” because, according to a screenshot of the conversation, Assange had “some news about Warner” to discuss with Hannity.

On the February 8 edition of Fox News’ The Story with Martha MacCallum, host Martha MacCallum reported “brand new text messages” from Sen. Warner that were “obtained exclusively by Fox News” from, according to Fox News chief national correspondent Ed Henry, “a Republican source.” MacCallum claimed the text messages “puts a little bit of a wrinkle in” the Senate Intelligence Committee’s investigation into possible coordination between the Trump campaign and the Russian government during the 2016 presidential election. Soon after MacCallum’s exclusive report, Hannity promoted Henry’s report about the leaked Warner texts. President Trump weighed in as well, writing, “Wow! -Senator Mark Warner got caught having extensive contact with a lobbyist for a Russian oligarch.”

MARTHA MACCALLUM (HOST): We have some breaking news for you this evening on The Story. There are brand new text messages obtained exclusively by Fox News that reveal a questionable relationship between the top Democrat in the Senate's Russia investigation and a lobbyist representing a Russian oligarch. Good evening, everybody, I'm Martha MacCallum and this is The Story for tonight. Senator Mark Warner of Virginia, who held numerous press conferences over the past year promising a fair and bipartisan investigation into President Trump's supposed ties to Russia, was apparently trying to gain access through the Russians to Christopher Steele, the author of the infamous anti-Trump dossier. Writing in part in these text messages that are just being revealed for the first time, “we have so much to discuss. You need to be careful, but we can help our country.”

It's potentially at least a stream to follow up on that the Russians, perhaps, were trying to lay groundwork on both sides of the fence here.

The bottom line is Democrats have spent a lot of time talking about the president's ties to Russians, what kind of conversations he and his aides have had. Now these text messages that I got from a Republican source close to the committee is clearly an attempt by Republicans to say hang on a second, the top Democrat on this committee also had some questionable conversations about trying to keep some of this secret. And again, I want to stress, Warner’s office was very direct with me in saying they realize that this doesn’t look good out of context, as they say, but they insist the Republican chairman was in the loop.

MACCALLUM: Both sides have sort of pointed fingers at each other from the House side and Senate side that the House Intel Committee has all this friction between the Republicans and the Democrats and that on the Senate side, the gentlemen are working everything out with no problems. This sort of puts a little bit of a wrinkle in that.

Soon after the report, Sen. Marco Rubio (R-FL) acknowledged that “Sen.Warner fully disclosed this to the committee four months ago,” adding that this disclosure, “has had zero impact on our work."

Fox News has waged a months-long campaign attempting to undermine Special Counsel Robert Mueller’s investigation into possible coordination between the Trump campaign and the Russian government during the 2016 presidential election.