Fox News figures spent much of last month urging President Donald Trump to shut down the government unless Congress agreed to fund his $5 billion demand for a border wall. But now that the shutdown drags into the new year, Fox personalities are insisting that it is “not really a shutdown” and claiming that “a lot of people across the country don’t even notice” it is happening. But in reality, millions of Americans and hundreds of thousands of federal employees are feeling the impacts.

Consequences of the government shutdown

The federal government began a partial shutdown on December 22 after Congress failed to reach a spending deal that included funding for Trump’s wall. Now in its second week, the shutdown is affecting Americans in various ways. Here are a few examples:

National parks are largely unsupervised, creating safety concerns and sanitary problems: The Washington Post described the current national park system as the “Wild West” because at many of America’s national parks, “no one is at the gate. No one is collecting a fee. The visitor centers are closed.” While people are enjoying free access to the parks, “they’re finding trash cans overflowing and restrooms locked.” Parks are relying on volunteers to collect garbage and donate toiletries and cleaning supplies.

Native American tribes’ food, medicine, and other services are in jeopardy: Many Native American tribes rely heavily on federal funds to operate, meaning that “a shutdown can cripple their most basic functions.” Now, essential services such as health care and education are falling short for these communities. Roads remain unplowed where snow has fallen in the Southwest, leaving many people trapped in their homes and “unable to make the 20- or 50-mile journey to buy water, groceries and medicine.”

The shutdown impacts the international community: The U.S. government employs thousands of people around the world, the most obvious example being people who work at U.S. embassies. “Exempt” personnel whose work is “most vital to national security and the safety of human life” are required to work unpaid through the shutdown, impacting many American diplomats. Nonexempt workers who are placed on furlough may end up not being paid at all, which can have devastating impacts in developing countries “for people contracted to do work for the U.S. government, many of whom are not U.S. citizens.” The shutdown also affects humanitarian assistance and foreign aid, as new funding commitments and obligations cannot be made.

Fox News downplays the impacts of a government shutdown

Despite the many negative impacts being felt around the country, figures at Fox News insist that hardly anyone is being affected by the shutdown.

On the January 2 edition of Fox & Friends, co-host Steve Doocy asked, “But really -- has anybody really felt the government shutdown? I mean, I went through the airport a couple of times since the government shut down, didn’t even notice it.”

Doocy doubled down on his claim the next day, saying, “A lot of people across the country don’t even notice that part of the federal government is shut down.”

Fox & Friends then displayed a graphic emphasizing government programs that are still open, ignoring the detrimental impacts Americans are facing. 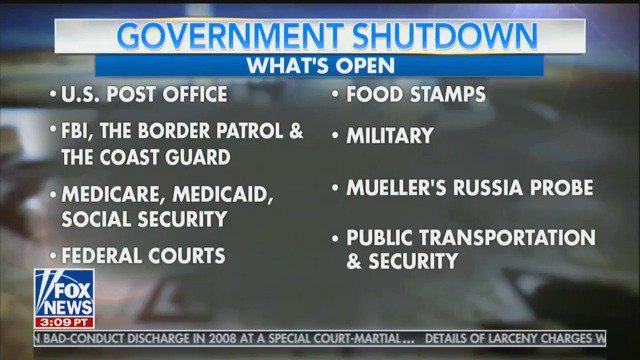 On Fox’s The Five, Greg Gutfeld claimed that “it’s not a shutdown” unless “we actually start feeling it,” suggesting that people weren’t being affected.

On his prime-time show, Fox host Sean Hannity took multiple opportunities to characterize the “so-called big government shutdown” as “not really a shutdown.”

Hannity also downplayed the shutdown’s impact on his radio show, saying that “we never have a government shutdown” because “essential services always continue.”

Fox contributor and former House Speaker Newt Gingrich said on Hannity’s radio show, “There’s a certain importance to Trump in, frankly, forcing a victory here. I don’t care how long it takes.” Gingrich also implied that shutdowns are actually positive, pointing out that he “helped close the government twice in 1995, early 1996 for a total of 27 days, and as a result of that confrontation we ended up getting a welfare reform, the largest capital gains tax cut in history, and we balanced the federal budget for four straight years.”