Fox News employees are rushing to defend Duck Dynasty star Phil Robertson after A&E placed him on indefinite hiatus for making anti-gay remarks in which he called homosexuality a sin, illogical, and akin to bestiality.

Out here in these woods, without any cameras around, Phil is free to say what he wants. Maybe a little too free. He's got lots of thoughts on modern immorality, and there's no stopping them from rushing out. Like this one:

“It seems like, to me, a vagina--as a man--would be more desirable than a man's anus. That's just me.I'm just thinking: There's more there! She's got more to offer. I mean, come on, dudes! You know what I'm saying? But hey, sin: It's not logical, my man. It's just not logical.”

“Everything is blurred on what's right and what's wrong,” he says. “Sin becomes fine.”

What, in your mind, is sinful?

"Start with homosexual behavior and just morph out from there. Bestiality, sleeping around with this woman and that woman and that woman and those men," he says. Then he paraphrases Corinthians: “Don't be deceived. Neither the adulterers, the idolaters, the male prostitutes, the homosexual offenders, the greedy, the drunkards, the slanderers, the swindlers--they won't inherit the kingdom of God. Don't deceive yourself. It's not right.” [GQ, January 2014, emphasis added]

Phil On Growing Up in Pre-Civil-Rights-Era Louisiana

“I never, with my eyes, saw the mistreatment of any black person. Not once. Where we lived was all farmers. The blacks worked for the farmers. I hoed cotton with them. I'm with the blacks, because we're white trash. We're going across the field.... They're singing and happy. I never heard one of them, one black person, say, 'I tell you what: These doggone white people'--not a word!... Pre-entitlement, pre-welfare, you say: Were they happy? They were godly; they were happy; no one was singing the blues.” [GQ, January 2014, emphasis original]

A&E Placed Robertson On Indefinite Hiatus Following His Remarks. On December 18, A&E announced that Robertson would be under “hiatus from filming indefinitely” and reiterated its support for the LGBT community:

In a statement, A+E Networks said, “We are extremely disappointed to have read Phil Robertson's comments in GQ, which are based on his own personal beliefs and are not reflected in the series 'Duck Dynasty.' His personal views in no way reflect those of A+E Networks, who have always been strong supporters and champions of the LGBT community. The networks has placed Phil under hiatus from filming indefinitely.” [Los Angeles Times, 12/18/13]

Robertson Released His Own Statement Explaining His Anti-Gay Remarks. Robertson released his own statement on December 18, stating that he would “never treat anyone with disrespect just because they are different from” him. [The Hollywood Reporter, 12/18/13]

Katie Pavlich: “Robertson's Statement Wasn't Anti-Gay.” Fox News contributor Katie Pavlich criticized A&E's suspension on twitter, writing that “in America now the only opinion you're allowed to have on homosexuality is one that GLAAD supports,” and “Robertson's statement wasn't anti-gay”: 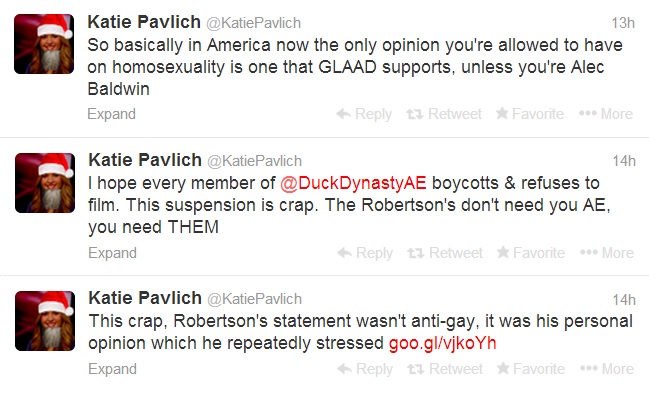 Evil preaches tolerance until it is dominant and then it seeks to silence good. Phil Robertson, patriarch of the Duck Dynasty clan, honestly answered questions during an GQ interview. He spoke openly of his Christian faith. Because he offended a secular left at war with orthodox Christianity, he must be punished.

A&E and Phil Robertson both chose to put their respective faiths ahead of profits.

What we should not shy away from is that Phil Robertson articulated very Biblical doctrine. He referenced scripture. Homosexual acts are, in fact, sinful according to the Bible. And as society begins to openly tolerate as normal things that really are not normal behaviors, society tends to start loosening up across the board as it descends down a slippery slope.

Actually, Robertson said precisely what true Christians believe and anyone, including A & E, letting GLAAD be an arbiter of true Christian thought is pretty quickly destined for hell fire.

A & E has now joined much of mass market culture in the Western World in picking sides in a fight -- tolerance for gay rights, but not for Christians expressing honest answers to questions asked of their faith. The only surprise is that the Christians of Duck Dynasty could last there as long as they did. A&E has as much right to do this as you have to turn the channel. But they have clearly aligned themselves against us in the culture wars. [RedState.com, 12/18/13, emphasis added] 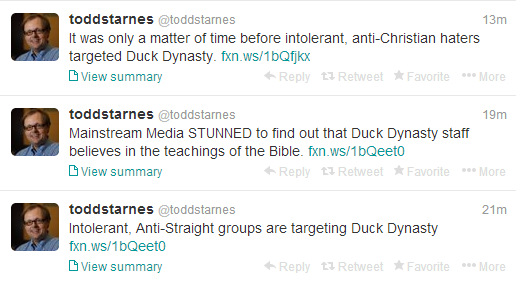 Free speech is an endangered species. Those “intolerants” hatin' and taking on the Duck Dynasty patriarch for voicing his personal opinion are taking on all of us. [Facebook, 12/18/13]