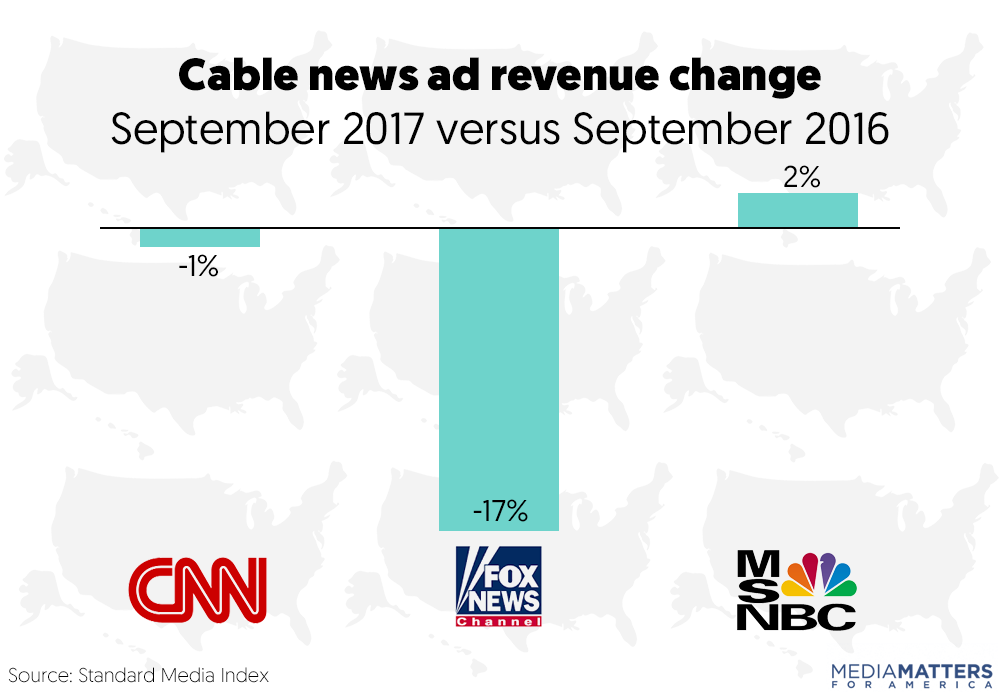 You can see those typical fluctuations reflected in MSNBC’s minor gain and CNN’s minor decline. Fox News’ decline, though, is sharp and wildly out of whack with its cable rivals.

The relative disproportion of Fox’s 17 percent loss means that it can’t be attributed merely to normal market fluctuations. If the market as a whole was the primary cause, then you’d see larger changes at CNN and MSNBC too. Accordingly, this massive loss indicates that there are other factors unique to Fox that are driving the drop.

Yes: Sean Hannity is losing advertisers! And, as we have seen before, when advertisers start leaving, revenue begins to decline.

Advertisers first became skittish about Hannity’s program in May of 2017 after he began promoting conspiracy theories about the July 2016 murder of a Democratic National Committee staffer. The conspiracy theory drew widespread backlash, including from the victim's family, journalists, and even others at Fox News. Yet Hannity carried on peddling the conspiracy theory, and he actually started lashing out at Fox News and its advertisers.

Hannity signaled that he was volatile and that his volatility could prove bad for business. So advertisers started paying attention. At this time, I also started to hear rumblings about advertisers dropping Hannity’s program.

As the weeks went on, Hannity’s conspiracy theories, smears, and attacks intensified. In early August, Media Matters responded to Hannity’s escalating extremism by launching an effort to educate advertisers about his conspiracy theory peddling, his collaboration with the White House to advance Trump’s interests, his efforts to undermine the rule of law, and the odious and reckless nature of his claims.

Based on my extensive experience with these kinds of campaigns, my sense is that Hannity’s advertiser losses are more significant than the dozen or so large companies that have provided explicit statements. Rather, Hannity’s volatility has become so widely recognized that media buyers, out of concern for their clients, are simply excluding Hannity’s program from their selections from the outset in order to avoid getting sucked up into one of his conspiracy theories or contemptible attacks.

Hannity’s recent collaboration with and defenses of serial sexual predator Bill O’Reilly will only make advertisers more wary about associating with him. And the fact that Fox News eagerly embraced this collaboration and actively promoted it will validate advertisers’ concerns about the Fox News brand as a whole. Rightfully so!

Sean Hannity is costing Fox News. Fox News accepts this either out of the goodness of its executives’ hearts, or, more likely, because the network prioritizes advancing a political agenda and Hannity helps advance that agenda. Those political priorities create an additional contributing factor to Fox News’ revenue drop: the bigotry, vitriol, lies, and rank partisan machinations that have come to define Fox News’ brand.

Aside from the Fox News lies that are put on full display for all every time Trump parrots a Fox & Friends segment, a look at the network’s coverage of the white supremacist rally in Charlottesville, VA, back in August tells you all you need to know about Fox News’ maleficence. On that day, a protestor was run over and killed by a white supremacist. Instead of covering the tragic death for what it was, Fox News spent several hours maligning the people protesting white supremacists and repeatedly suggesting that the white supremacist driver was acting out of self-defense -- needless obfuscation from Fox News that seemingly contributed to Trump’s initial “both sides” comment.

That’s not an outlier. There’s a list a mile long of examples just like that, because it’s the Fox News brand.

Visit StopHannity.com to learn more about how you can get involved in the effort to hold Sean Hannity accountable. Your participation matters. Onward!