A new report published by Politico examines the rejection that Fox News’ most prominent programs are experiencing from advertisers.

Just how bad is it?

According to the article, Fox News host Laura Ingraham’s advertiser base has effectively evaporated. Most national “blue-chip” advertisers won’t advertise on her show. Her advertiser base, which had included 229 brands prior to April 2018, has shrunk down to 85, with many of those either being short-burst political advertisers or less desirable direct-response ads.

In late March 2018, Ingraham publicly ridiculed Parkland mass-shooting survivor David Hogg for not being accepted to a college he had applied to attend. Hogg and online activists responded by showing Ingraham’s history of attacks to her advertisers. Advertisers fled her program in droves, with many publicly announcing their decision and many more quietly removing their ads. Advertisers publicly exited her show a second time a few months later after Ingraham compared immigrant children detention centers to summer camps.

As Politico observes, Fox News responded to this diminished advertiser inventory by reducing the commercial time on Ingraham’s show by about one-third -- from around 15 minutes per show to a bit more than 10 minutes per show.

But this time statistic alone doesn’t capture the full scope of the damage, because it includes unpaid ads (like promos for Fox News programs).

With most blue-chip advertisers refusing to run on Ingraham’s show, the companies filling the available slots are direct-response advertisers that “often look to buy leftover space at discounted rates and are less picky about where their ads appear,” Politico noted. Over time, this trend has the net effect of driving down the ad rates for a show. (The exact same thing happened with Glenn Beck’s Fox program, as I chronicled here in great detail.)

In dollars and cents, Kantar Media’s Jon Swallen tells Politico, Ingraham’s advertising revenue could be down a staggering 15-30 percent!

The advertiser problems aren’t limited to Ingraham’s show either. Dozens of companies have removed their ads from Sean Hannity’s program, and even more have told me that they block Hannity and other more extreme Fox News programs so their ads never appear in the first place.

Gambelli’s assessment is partially correct. Activists have been a potent force here. And, I admit, Media Matters has doggedly chronicled Fox News, and we have spent considerable time over the past year warning advertisers and media buyers about Fox News’ intensifying extremism and the risks of associating with it.

But Gambelli ignores the bigger cause of Fox News’ growing advertiser problem: the channel’s own talent.

Fox News’ most prominent shows -- the ones that are supposed to be most palatable for advertisers -- are also defined by bigotry, extremism, conspiracy theories, and outright volatility. From a business perspective, they’re a bad bet.

Additionally, those shows and the network as a whole often function as an extension of the White House’s communications operation. It’s one thing for a show to have an ideological or political perspective, but much of Fox News’ programming these days is more akin to a political propaganda operation. That puts advertisers in the position of not just aligning with an ideology, but actively participating in politics -- something just about every advertiser is loathe to do.

Earlier this month, I tweeted out this observation following a series of recent conversations with media buyers:

In the past two weeks, I've spoken pretty extensively [with] media buyers that place a lot of ads on Fox News. There is deep anxiety brewing that they will need to shift their clients' ads away from Fox News before a massive controversy forces them to after causing reputation damage.

After a then Fox News contributor tweeted that Prof. Blasey Ford was a “skank,” one buyer who I had been pushing on for some time reached out to me saying, “This is what you've been warning about. Thank god for advertisers this didn't happen on air.”

But what that buyer missed and I pointed out is: It just as easily could have happened on air because that kind of stuff is not abnormal for Fox News, it's actually the norm. And you can see similar odious comments daily.

Those sentiments I was hearing were echoed by the advertising executive quoted in the Politico report:

One advertising executive said that most brands he works with find it easier to steer clear of the Fox News prime-time block. He said CNN and MSNBC are not subject to the same concerns, since those networks’ hosts have not courted controversy at the same level.

“Those prime-time personalities for the most part have proven themselves over time to be more trouble than they’re worth,” the executive said of Fox News.

Indeed. The advertising industry has ample reason to feel this way.

Last fall, Fox News viewers began smashing their Keurig machines at Sean Hannity’s behest after the company advised me that it would remove its ads from Hannity’s show: 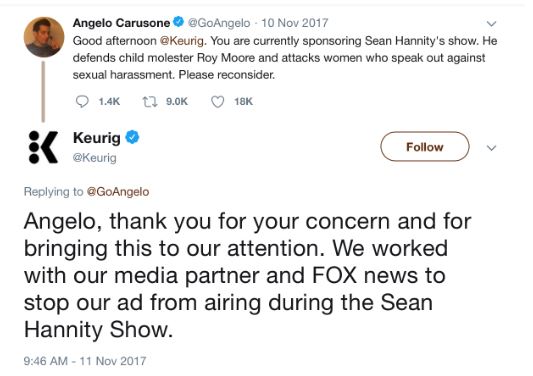 Fox News basically let the situation unfold for days before seemingly intervering and pressuring Hannity to tamp down the boycott of his former advertiser. But the business damage was done, as more media buyers recognized that the best way to protect their clients from the inevitable next outrage was just to keep their ads off the program in the first place.

There’s been a steady stream of reminders, too.

For example, Tucker Carlson courted controversy earlier this summer when he began effectively promoting an ethnonationalist ideal of people living with their own kind by arguing that diversity actually makes society weaker.

Just a few weeks ago, citing an increase in non-white people in America, Laura Ingraham lamented that “in some parts of the country, it does seem like the America that we know and love doesn’t exist anymore.”

And there are plenty more where those two examples came from.

The bottom-line takeaway from this latest Politico piece is consistent with what I have been saying for some time now: A portion of Fox News’ programming is increasingly toxic to advertisers due to its extremism or volatility, and those shows are experiencing deep and sustained advertiser losses.

It’s clear that Fox News isn’t going to change or address the issues either. So those advertiser problems are about to get even worse.