Conservative media claimed that the million or so students who participated in a 17-minute school walkout one month after the shooting at Marjory Stoneman Douglas High School had been “misled” and “exploited” by a “political class." 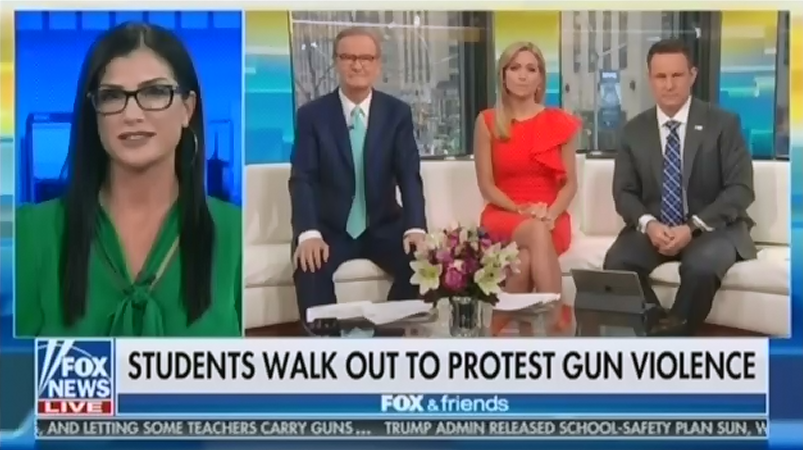 Students around the country walked out of their schools “by the hundreds and the thousands” to participate in protests against gun violence. One month after 17 people were killed during a shooting at Marjory Stoneman Douglas High School in Parkland, FL, students walked out of their classrooms for 17 minutes to demand stronger gun safety laws. Protesters ranged from elementary- to high school-aged students, some of whom faced disciplinary action for walking out:

On Wednesday, driven by the conviction that they should never have to run from guns again, they walked.

So did their peers. In New York City, in Chicago, in Atlanta and Santa Monica; at Columbine High School and in Newtown, Conn.; and in many more cities and towns, students left school by the hundreds and the thousands at 10 a.m., sometimes in defiance of school authorities, who seemed divided and even flummoxed about how to handle their emptying classrooms.

The first major coordinated action of the student-led movement for gun control marshaled the same elements that had defined it ever since the Parkland shooting: eloquent young voices, equipped with symbolism and social media savvy, riding a resolve as yet untouched by cynicism. [The New York Times, 3/14/18]

National Rifle Association national spokesperson Dana Loesch told Fox & Friends hosts that the protests were the result of some in the “political class ... trying to exploit this six ways to Sunday.”

On Fox News’ morning show Fox & Friends, International Women’s Forum senior fellow Julie Gunlock agreed parents had been misled about the true purpose of the school walkouts and called the organized protests “an unfortunate misstep” that was “not a good use of [the students’] time.”

Fox News’ Laura Ingraham told her viewers that the walkout wasn’t some sort of “organic outpouring of youthful rage,” saying it was “nothing but a left-wing, anti-Trump diatribe.”

Fox news host Tucker Carlson claimed the students did not “act independently” and were “under the control of adults” to “advance political agendas.”

The Daily Wire’s Ben Shapiro told Fox News’ Martha MacCallum the media are “activating these kids” and using “them as political human shields.”

Conservative radio host Sean Hannity said the walkout was a “despicable” attempt to “indoctrinate our kids … to vote Democrat in the fall."