Conservative media have attacked President Obama's jobs plan as a “catastrophe,” a “political stunt,” and a “giveaway” to groups that Obama “favor[s]” before the plan has even been released.

Obama's Jobs Plan Has Yet To Be Released...

AP: President Obama Will “Deliver An Address On Jobs And The Economy To A Joint Session Of Congress On Sept. 8.” The Associated Press reported:

In a retreat after an hours-long test of wills Wednesday, President Barack Obama agreed to deliver an address on jobs and the economy to a joint session of Congress on Sept. 8, yielding to House Speaker John Boehner, who had balked at Obama's request for a Sept. 7 speech.

Obama's address still gives him a grand stage to unveil his economic agenda, but it falls on the same evening as the opening game of the National Football League season. White House officials were working on the precise timing of the speech. [Associated Press, 8/31/11]

...But Right-Wing Media Have Attacked It Anyway

Rush Limbaugh: “This Isn't A Serious Job Proposal. It's Just Another Political Stunt From Obama And The Opticians.” From the September 1 edition of Premiere Radio Networks' The Rush Limbaugh Show:

LIMBAUGH: It is interesting to go through the drive-by media headlines on what happened regarding John Boehner's refusal to agree to the date September the 7th for Obama's political speech, a campaign speech before a joint session of -- no, it wasn't a jobs speech. It was never going to be a jobs speech. We already know what his jobs plan is. Jim DeMint had the best idea on this. Did you hear what Jim DeMint said? He had a great point in the middle of all this scheduling nonsense. DeMint said, “Look, if Obama has a jobs proposal put it in writing and give us a cost estimate, send it up here. I want to read the bill. I don't want to listen to talking points off a teleprompter.” Now that's the way a serious job proposal would be presented. But this isn't a serious job proposal. It's just another political stunt from Obama and the opticians. [Premiere Radio Networks, The Rush Limbaugh Show, 9/1/11]

Radio Host Chris Plante On Fox: Obama's Jobs Plan Is “Just Another Catastrophe In A Long Line Of Catastrophes.” From the September 1 edition of Fox News' America Live:

PLANTE: The president threw a political stink bomb down the hall just to pick a food fight because they don't have a plan. The Washington Post said they're struggling to come up with ideas. They're going to be the same tired old ideas that we've heard before. The natural operating environment for this White House is to be in a food fight. As long as they're in a food fight, they've got their Pretorian guard in the White House press room warming up for today's briefing. And they think that they can look good if they just keep blaming somebody else, picking fights and coming out on top -- thanks to their friends in the news media. I think the president did this quite deliberately to distract from the fact that they still don't have a plan. They don't have a plan for the economy, for jobs, or anything else.

MEGYN KELLY (host): But let me you ask you this here. Could there be another procedural misstep here, Chris? Because now we've already had such a build up to this jobs speech, right? Because the president was like, “It's coming when I get back from Martha's Vineyard. I'm going to unveil the big plan.” And people said, “Why not now? Why make us wait?” And then it started to leak details, buh-buh-buh-buh-buh. And now it's even more because now it's like we're all talking about like the speech, the speech, “What night's it going to be? Is it going to be in front of Congress? Should he do it in front of the Oval Office instead buh-buh.” So now it better be something fantastic, no?

PLANTE: Well, it better be but it's not going to be. I mean, we've already heard from people who have the inside track in Washington what the essence of the speech is going to be and we've heard it all before. They may pick a couple of cherries from someplace else to throw on top but this is a catastrophe though -- just another catastrophe in a long line of catastrophes. They have no budget. They have no plan. We're two and a half years in. He's added 4 trillion dollars to the debt and they don't know where we're going. Since they can't lead, they must attack. They have nothing to defend so they must go on the attack. It's what they do. It's their nature. Honestly, I'm beginning to feel sorry for them. [Fox News, America Live, 9/1/11] 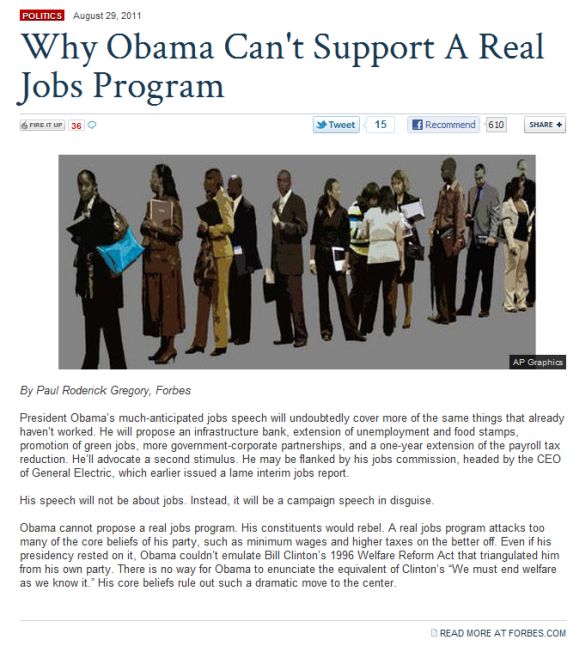 Fox's Andrea Tantaros: In His Plan, Obama Will “Start To Cherry-Pick ... Industries That Benefit Him Politically.” From the August 31 edition of Fox News' Hannity:

SEAN HANNITY (host): [I]t's interesting. The president just cannot resist. He's got to spend more, raise more taxes, and I think with people paying a pretty high price at the pump they are not going to like seeing their gas prices stay high.

TANTAROS: And most importantly he's got to reward his key constituencies -- the unions. So he's going to funnel more money to them through this jobs plan. I mean, he talks about also railing against these corporate welfare programs. This plan that he's going to come out with is likely going to be another corporate welfare program. You watch. It's not going to be tax credits for all businesses. He's going to start to cherry-pick different industries that benefit him politically. [Fox News, Hannity, 8/31/11]

Fox's Charles Payne: “Do You Get The Sense” That “What We're Going To Hear Next Week Really Isn't An Economic Policy Plan But” The “Unofficial Launch” Of Obama's Presidential Campaign? From the August 30 edition of Fox Business' Freedom Watch:

PAYNE (guest host): Ernest, do you get the sense then what we're going to hear next week really isn't an economic policy plan but more of a -- sort of the launch, the official -- unofficial launch if you will -- of the presidential campaign? This is more of a plan of divide and conquer, “I'm in it to help you guys out” -- you being Main Street - “against the bullies and big business and on Capitol Hill.”

ERNEST ISTOOK (Heritage Foundation distinguished fellow): Unfortunately President Obama is about shifting blame. Of course he says, “Well, it's the failed policies of the Bush administration,” or it's because Republicans wouldn't do his bidding. I think the thing is he wants to put out a plan out there that has enough in there that's unacceptable to mainstream America so that he can then say, “Oh, it's not my fault that things didn't get better. It's because the Republicans wouldn't go along with me raising taxes, raising regulations, raising spending.” All of these other things that he wants somebody to be able to blame when he ought to be looking at himself. This is what I call mad hatter economics. It's not thinking straight at all.

PAYNE: Well, you know what? I don't know that we can go there, because ultimately for the president it might not be about the economy but being re-elected.

PAYNE: Divide and conquer swept him into office the first time around, so for his ultimate agenda and goal -- being re-elected -- that might be the only way he knows how to do it.

BRET BAIER (guest host): You wrote in your Wall Street Journal column in June, quote “Failing to offer a well thought-out vision and defend it against White House demagoguery would set Republicans up for a loss in 2012.” If right now voters were trying to see the Republican plan for creating jobs and increasing growth -- where is that? Where do they turn? What is that plan?

ROVE: Well, it's -- you turn to each one of the candidates, and that process will unroll as we go through the primaries. I'd like to go back to something that Bill said. Look, the president has had a Democrat Congress for over two-thirds of the time that he's been in office and a Republican House and Democrat Senate for less than a third of the time. He did have a -- he got what he wanted. He passed the stimulus bill in 2001. He increased spending during that year as well. He got Affordable Care Act. When the president passed the stimulus bill he said that unemployment by this time would be six percent, that five million more people would be working -- nearly five million more people working today than are working. The president's approval rating this week in Gallup on economy is 26 percent. There's a reason why: his policies have utterly failed. This is the seventh, or eighth, or ninth time that we've heard the president talk about producing a plan. And each time that he's sort of gotten around to tossing an idea onto the table, it has included only more spending, more deficit, more debt, and the American people are fed up with it. [Fox Broadcasting Co., Fox News Sunday, 8/21/11]