It was concerning enough when in January 2018, the anti-abortion group Operation Rescue encouraged followers to look into the allegations of an anonymous conspiracy theorist on the 8chan message board. Now, it appears that Operation Rescue, with its history of violent rhetoric and harassment, has become fully converted and is seeking to cultivate anti-abortion followers into believers in a far-right conspiracy theory.

Headed by longtime extremists Troy Newman and Cheryl Sullenger -- the latter has served time for conspiring to bomb an abortion clinic -- Operation Rescue has been described as an organization dedicated to “shut[ting] down abortion clinics by systematically harassing their employees into quitting.” Operation Rescue initially signaled that they’d been “red-pilled” -- a term popularized by the “alt-right” to refer to an ideological conversion to “seeing the world as it really is” -- in a January 7 press release, in which the group signal-boosted a series of posts from a far-right community on 8chan.

8chan is a message board system -- similar to 4chan and Reddit -- that enables users to engage in discussions anonymously. This has made such communities hotbeds of racist commentary, misogyny, and politically motivated harassment campaigns, in addition to serving as fertile ground for those in the so-called “alt-right” or white nationalist movement. As Mother Jones’ Mariah Blake explained, “men’s rights forums on sites like 4chan and Reddit are awash in misogyny and anti-feminist vitriol” -- a trend that has turned such sites into what Vox’s Aja Romano called a “gateway drug” that leads people into the “alt-right.”

In the January 7 release, Operation Rescue focused on an 8chan conspiracy theory called “The Storm” in which a user who refers to himself as “Q” claims to be a “high-level government insider” secretly sharing clues to “inform the public about POTUS’s master plan to stage a countercoup against members of the deep state.” The scope of the conspiracy theory has expanded to encompass all types of events, ranging from a fire at Trump Tower to a train accident involving Republican members of Congress. Most recently, followers of The Storm have joined a campaign calling for the release of a four-page classified memo drafted by House intelligence committee Republicans that allegedly shows illicit behavior by the FBI and Justice Department during the early phases of investigating connections between Trump associates and Russia -- a campaign organized around the Twitter hashtag #ReleaseTheMemo. According to The Daily Beast, right-wing figures as well as online message board communities “have since turned the hashtag into a rallying cry, imploring fans to tweet the hashtag.” On February 2, the President Donald Trump authorized the release of the memo, despite explicit warnings from the FBI about the veracity of its contents.

In the January 7 press release, Operation Rescue acknowledged that “Q” is a conspiracy theorist -- or at least inspires conspiracy theories. Since then, the social media activity of the group and its leadership indicates that they’ve gone full Sean Hannity. Between January 7 and February 12, both Sullenger’s Twitter account and the official Operation Rescue account have increased their engagements with accounts promoting #ReleaseTheMemo and related hashtags (#Qanon, #TheGreatAwakening, #FollowTheWhiteRabbit). In the past month alone, Sullenger’s changed her account handle to “CherylS sez #ReleaseTheMemo” and followed a number of right-wing media personalities’ accounts, including Alex Jones, Jerome Corsi, Paul Joseph Watson, Mike Cernovich, Sean Hannity, Tucker Carlson, Mark Levin, and Sara Carter.

Since January 2018, Sullenger and Operation Rescue’s social media accounts have demonstrated a precipitous slide into full-embrace of The Storm and #ReleaseTheMemo: 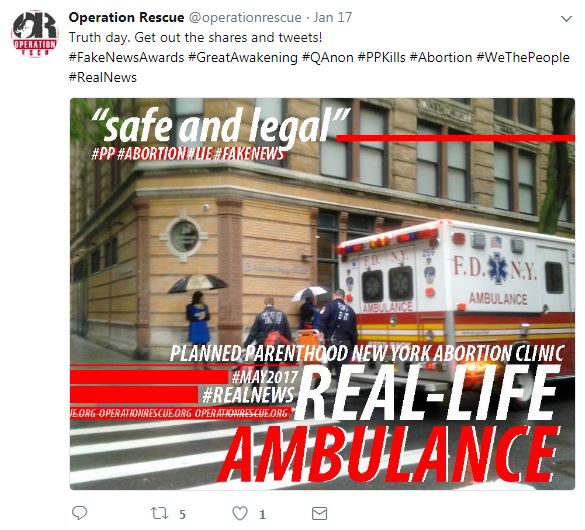 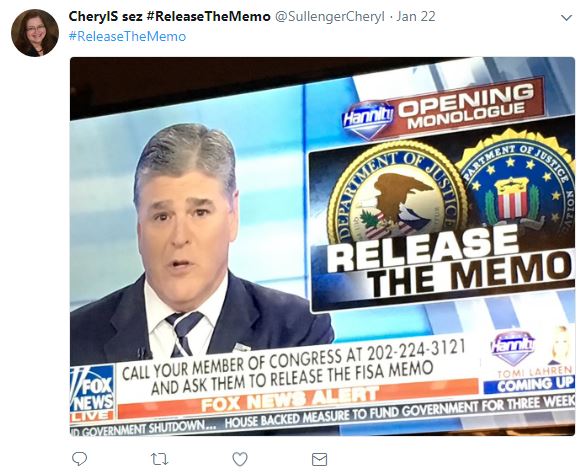 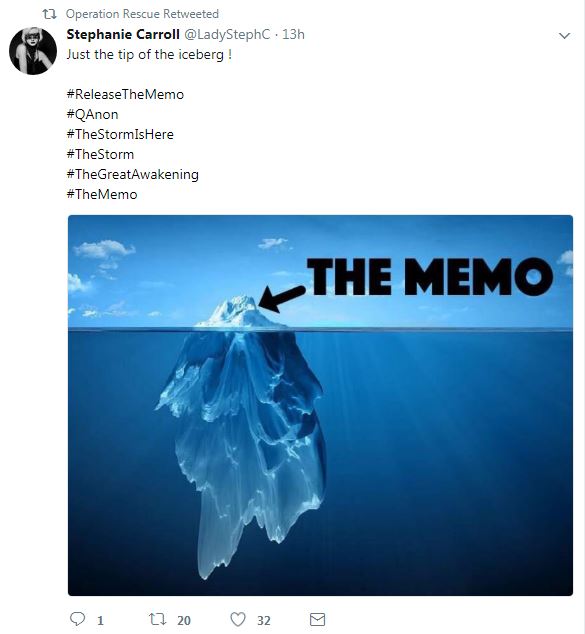 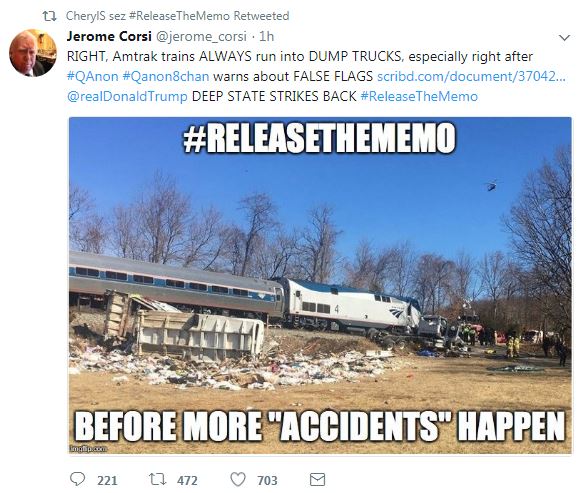 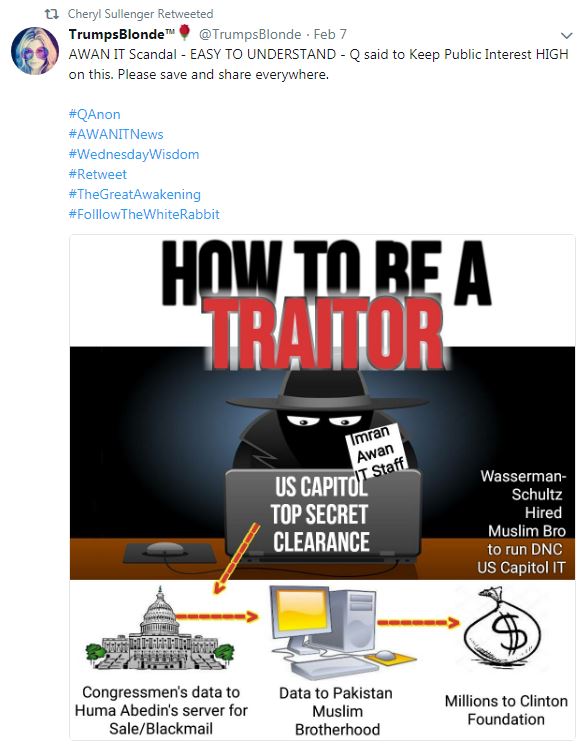 Throughout much of this timeline, the social media accounts of Troy Newman did not engage as often with topics related to The Storm, #ReleaseTheMemo, or even right-wing media personalities. However, on January 31, a public post on Newman’s Facebook page directed followers to what appears to be a conspiracy theory blog for a man named Jim Stone. 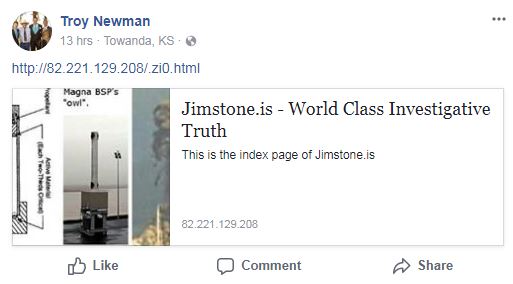 The site seems to house blog posts about a number of conspiracy theories, including one about an alleged plot by House Minority Leader Nancy Pelosi (D-CA) to smuggle a gun into the State of the Union and assassinate Trump:

Among other extreme conspiracy theories, Stone claimed the January 31 train accident occurred because Republican members of Congress had “received death threats over the memo, and were heading to a safe place when they were stopped by a staged ‘accident’”: 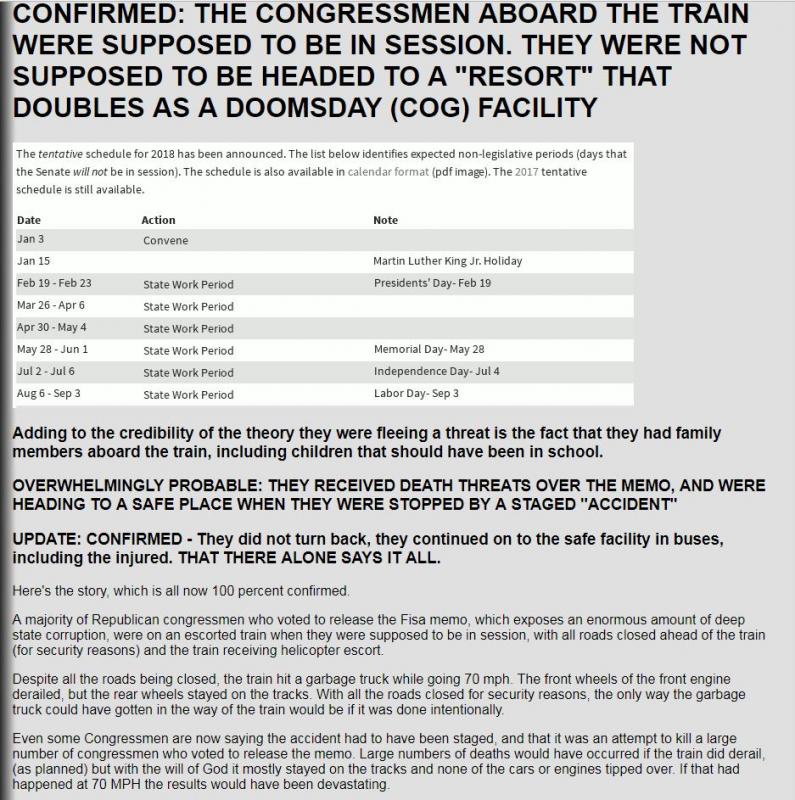 Perhaps the most outlandish conspiracy theory of all: “If Trump gets killed, they can produce a fake Trump and have him say whatever they need him to say in real time.” The blog continued that this technology had been used “with Hillary [Clinton] during the campaign” and that it was “critical information you cannot skip seeing”:

After the memo was released on February 2, Newman tweeted and posted on Facebook, wondering if it was “too early to call this an attempted coup” against Trump. 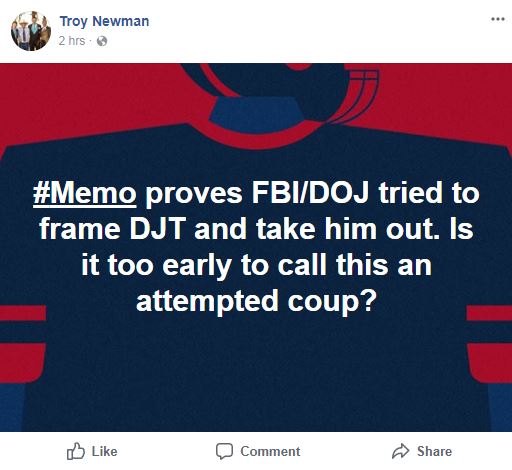 One thing is certain: If Sullenger and other members of Operation Rescue have been fully “red-pilled,” they are not only exposing their audience to a wellspring of conspiracy theories, but also potentially becoming further radicalized themselves. And if exposure to rapidly misogynist online communities is truly a “gateway drug,” as Romano warned, the cross-pollination between these 8chan conspiracy theorists and anti-abortion extremists is an incredibly dangerous prospect.