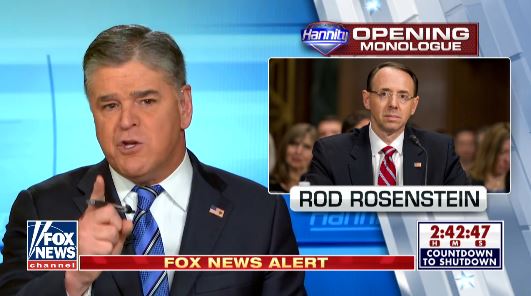 President Donald Trump is newly frustrated with Deputy Attorney General Rod Rosenstein, according to several recent reports, some of which suggest the president is contemplating firing him. While the president fumes, an array of his closest allies at Fox News are encouraging him to remove or even imprison the Republican longtime federal prosecutor who currently oversees special counsel Robert Mueller’s Russia investigation.

The pro-Trump media’s attacks on Rosenstein are not new -- his appointment of Mueller last May and his refusal to countenance removing the special counsel has made him a regular target. Sean Hannity called for Rosenstein's resignation as early as June, while other network figures have described him as part of a Justice Department “cartel, the equivalent of the mob” engaged in “what essentially amounts to a coup d'etat” against Trump.

But the tempo of the criticisms has dramatically increased over the past 10 days, as Trump’s propagandists have focused on the need to release a memo drafted by Republicans on the House intelligence committee. GOP members claim the memo shows the FBI and DOJ were biased against the president during the early phases of their investigation into improper communications between Trump associates and Russia, while Democratic members call it a cherry-picked weapon aimed at dismantling Mueller’s investigation.

According to The New York Times, the memo focuses in part on Rosenstein’s actions, which the paper reports “indicates that Republicans may be moving to seize on his role as they seek to undermine the inquiry.” That could give Trump cover to fire Rosenstein and replace him with someone more amenable to either ending or curbing the special counsel’s investigation.

Since Republican members of Congress first began discussing the memo on January 18, the president’s friends at Fox have engaged in a withering drumbeat of Rosenstein criticism, at times calling for his firing or even his arrest.

Hannity, a sometime presidential adviser who has turned his show into a nightly assault on the rule of law in an effort to protect Trump from the Russia investigation, said the night after the memo story first gained credence: “Rod Rosenstein, you need to explain your role in all of this and specifically if you were involved in extending this FISA warrant. And, frankly, Rod Rosenstein needs to be fired.” Hannity again called for Rosenstein to be “fired and investigated” on January 22. He has described the deputy attorney general as “corrupt,” suggesting he was part of a “rogue group of Obama administration holdovers that despise Donald Trump” that were “abus[ing] the powerful, unmatched tools of intelligence that we give our government to protect us” in order to “influence first the election and then undermine the choice of the American people.” He also questioned whether Rosenstein might be part of a non-existent anti-Trump “secret society.”

Gregg Jarrett, a low-profile Fox News anchor who emerged last year as the network’s leading legal defender of the president, told Hannity on Wednesday night that Rosenstein had approved an “illegal investigation.” In an appearance on Lou Dobbs’ Fox Business show the same evening, he claimed that Rosenstein has “serious political bias” and may have committed a federal crime that carries a 10-year prison sentence. Dobbs, who frequently suggests that various people have broken the law by not being sufficiently supportive of the president, replied, “So when do the arrests start?” After Jarrett said that should have happened long ago but “it was hidden for a long time,” Dobbs replied, “I hope that’s also a federal crime.”

Discussing the memo on Justice with Jeanine Pirro on Saturday, Judicial Watch’s Tom Fitton claimed that there needs to be “pressure on the FBI to clean out its ranks at the leadership level,” adding, “If Rod Rosenstein isn’t going to do it, they should find someone who will.” Pirro, who has repeatedly called for the arrests of DOJ and FBI leaders and met with Trump in the White House in November, responded, “I got to tell you I couldn’t agree with you more. That place is dirty.”

And in an appearance on Fox’s The Ingraham Angle, former Trump adviser Roger Stone said that Rosenstein “is not on the level” and should be fired.

Is Trump angry at Rosenstein and contemplating firing him because of Fox’s coverage? Is Fox providing so much negative coverage about Rosenstein because its hosts know the president wants him out? Are the two efforts happening entirely in parallel? Fox’s dual role as the president’s news source and the propaganda megaphone trumpeting his message to his base, as well as the propensity of several Fox figures to advise him privately, makes it difficult to draw causality arrows. But what’s clear is that if Trump does move against Rosenstein, his most loyal followers will already be primed to accept the effort as the logical response to a purportedly disloyal Justice Department official.