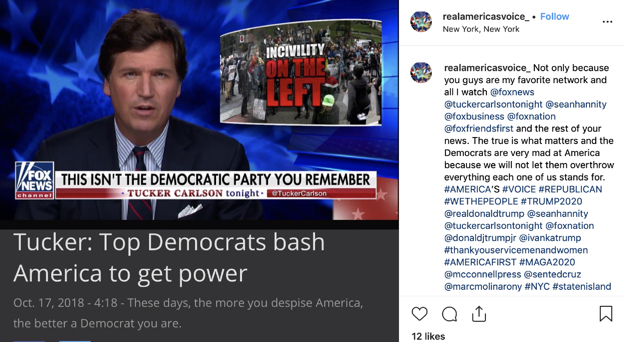 A man facing charges for allegedly carrying out a QAnon-inspired killing also appears to have had his worldview significantly shaped by Fox News, as is evident from his social media account.

On March 13, Anthony Comello allegedly shot and killed Francesco “Franky Boy” Cali in Staten Island, NY. Cali was reportedly a member of the Gambino crime family. During a court appearance following his arrest, Comello was photographed with a “Q” on his hand, a reference to the QAnon conspiracy theory.

The New York Times followed up on this angle in a July 21 article, reporting that Comello’s lawyer claimed “Comello had become convinced that Mr. Cali was part of the so-called deep state, a cabal of criminals that conspiracy theorists claim controls the United States government.” The Times reported that Comello’s attorney says the murder was carried out because Comello “believed he was a chosen vigilante of President [Donald] Trump.”

The Times reported that court filings list the handle of Comello’s Instagram account and that Comello was “posting and sharing conspiracy theories online that are associated with the far-right.” According to the paper, Comello was “engaging with other QAnon believers on the internet”:

Mr. Gottlieb identified one of Mr. Comello’s accounts, RealAmericasVoice_ on Instagram, in his filing. The page has dozens of memes and written screeds, some that are difficult to decipher, including several posted days before Mr. Cali’s death.

One post accuses Speaker Nancy Pelosi, Democrat of California, of being a fascist. “Patriot sleeper cells are awake,” he wrote in another. Yet another refers to Bill and Hillary Clinton as “The Clinton Crime Family.”

What the Times declined to include in its reporting is that in addition to posting conspiracy theories, the RealAmericasVoice_ Instagram account heavily focused on promoting Fox News. For example, the post about “The Clinton Crime Family” referenced by the Times shows that the Comello’s claim was partly sourced from Fox News host Sean Hannity: 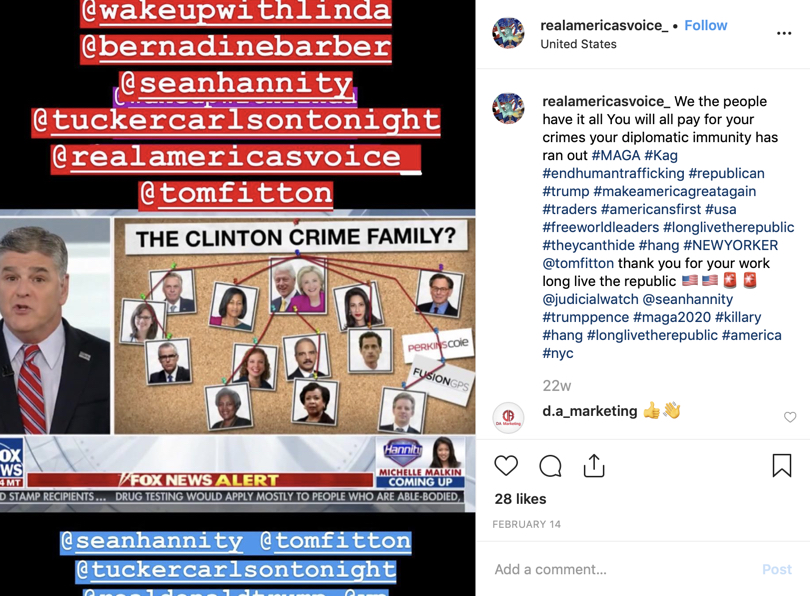 Hannity’s conspiratorial “Clinton Crime Family” claims are an area where Fox News programming overlaps with the QAnon conspiracy theory -- both push the notion that Trump is waging war against a “deep state” operated by criminal elites.

In the months leading up to the killing, Comello frequently made posts on Instagram with videos or photos of his TV playing Fox News. In another post, Comello praised Hannity for “spreading the truth” and wrote that “the real news is @foxnews”: 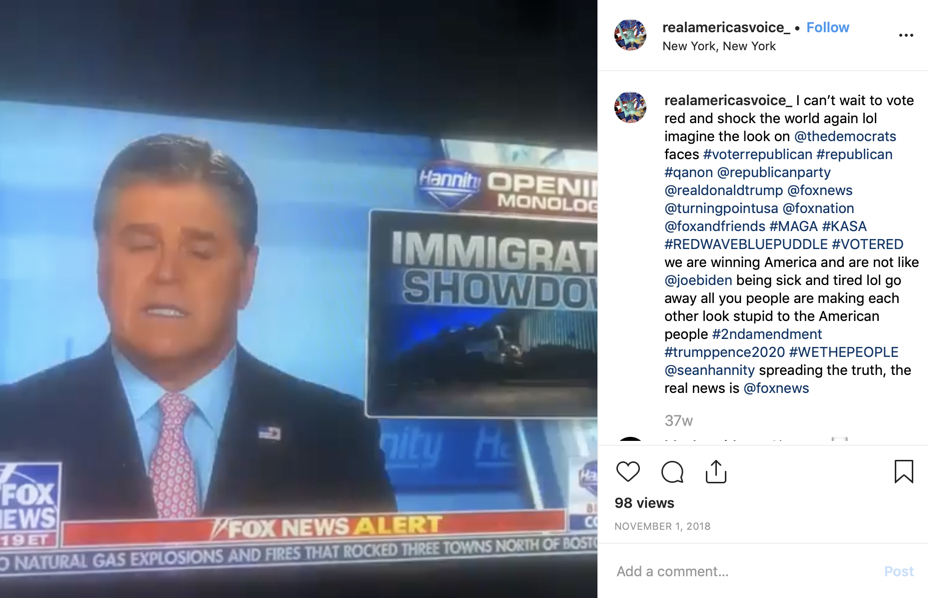 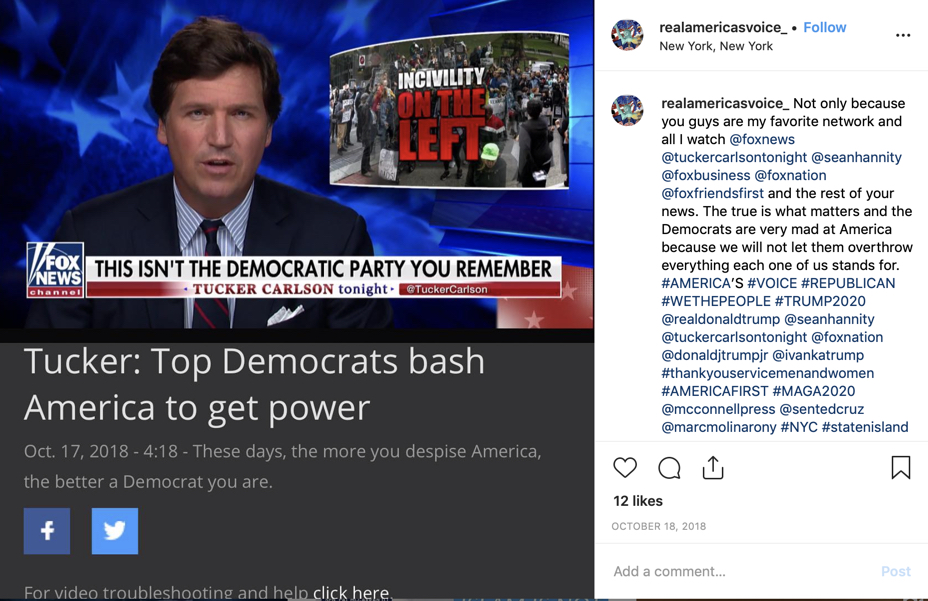 Comello uploaded a video of Carlson’s show on November 15 and wrote, “Now that right there is a news monologue”: 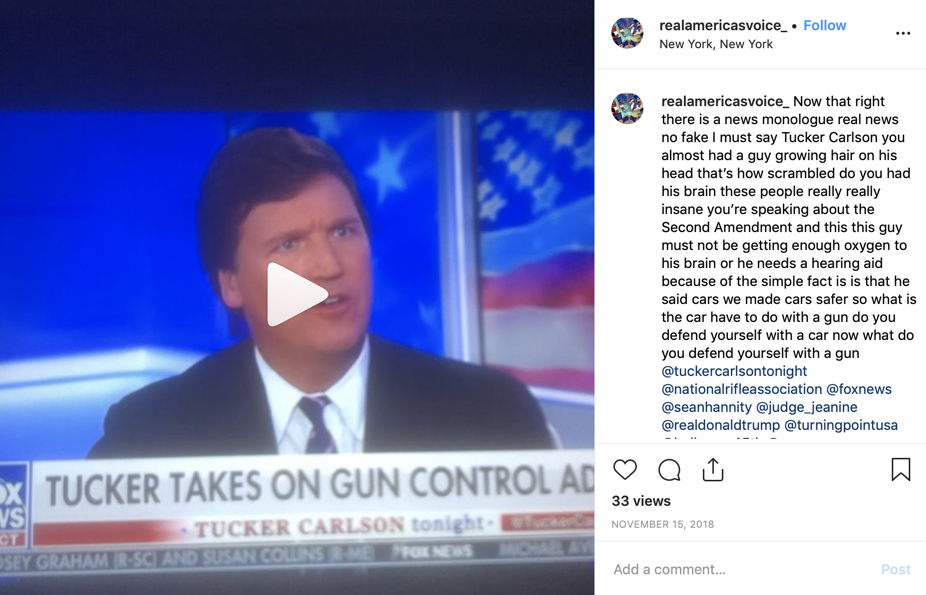 Comello, who would later use a gun to shoot his victim, praised Carlson multiple times for attacking gun violence prevention laws. He also praised the NRA in one of those posts.

On January 5, Comello uploaded a video of Fox News host Jeanine Pirro attacking Rep. Rashida Tlaib (D-MI) on her Fox News show. In a comment, Comello told Tlaib to “go back to Iran”: 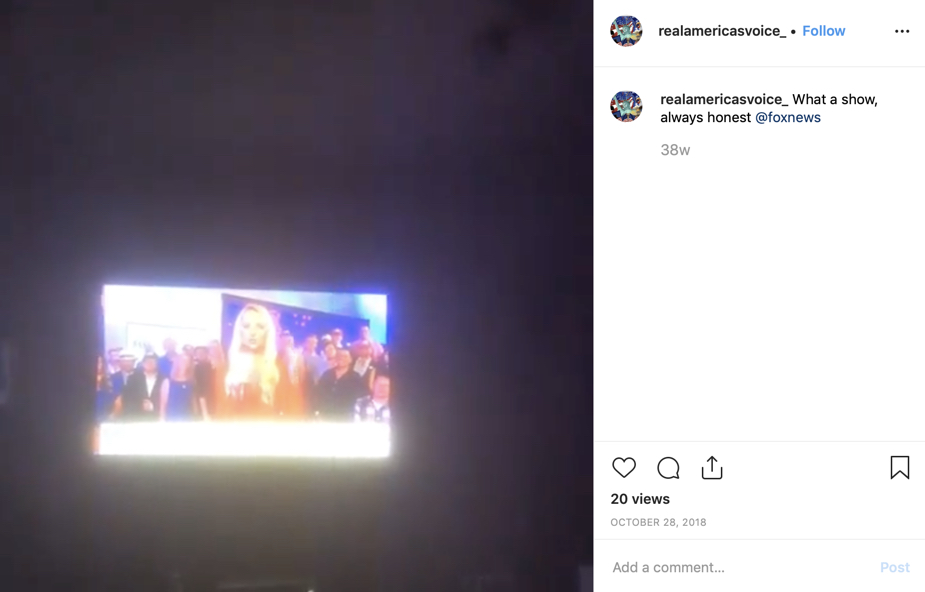 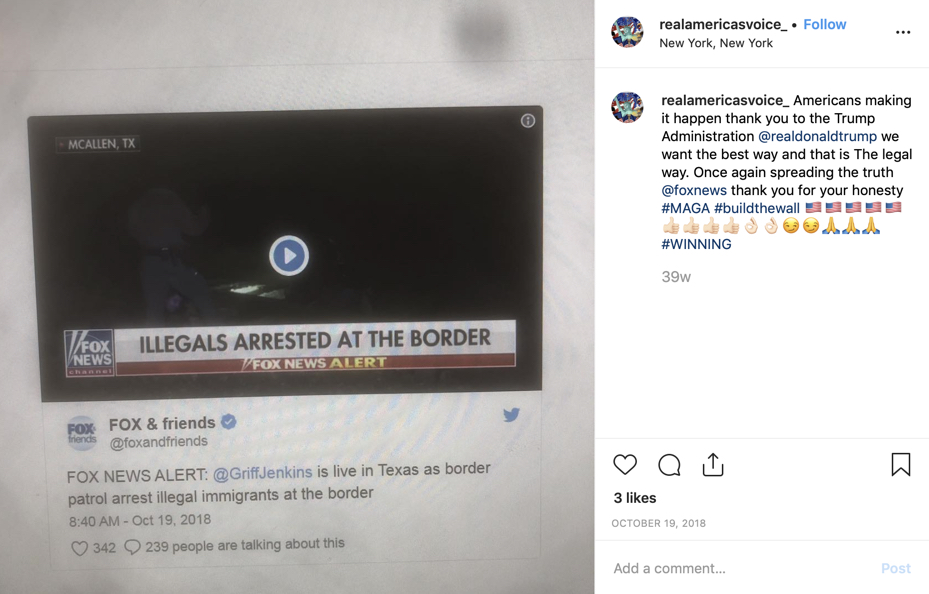 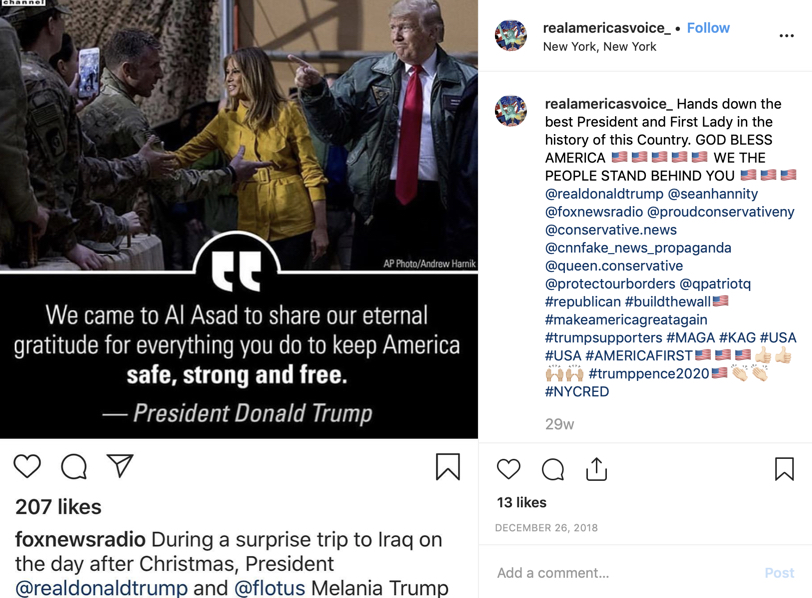 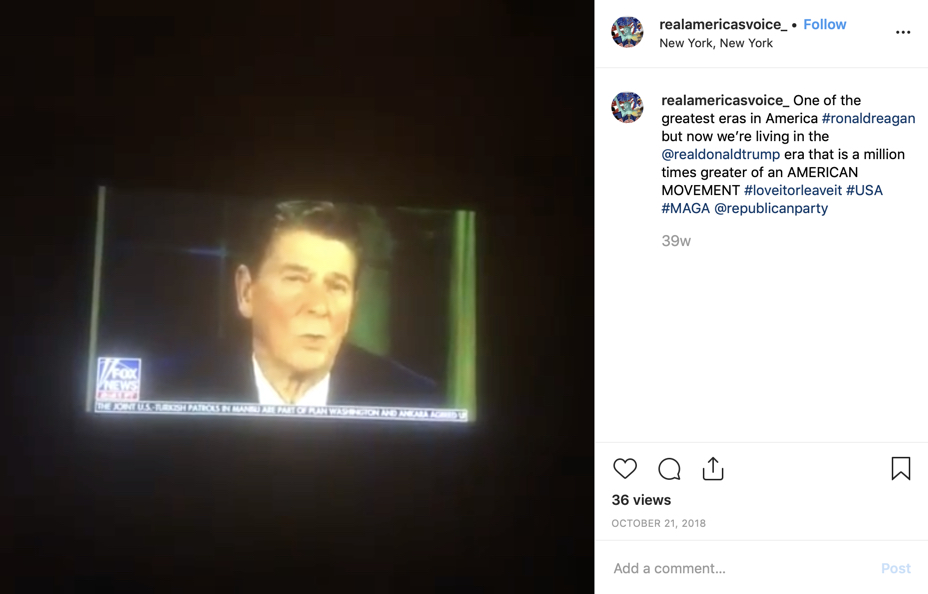 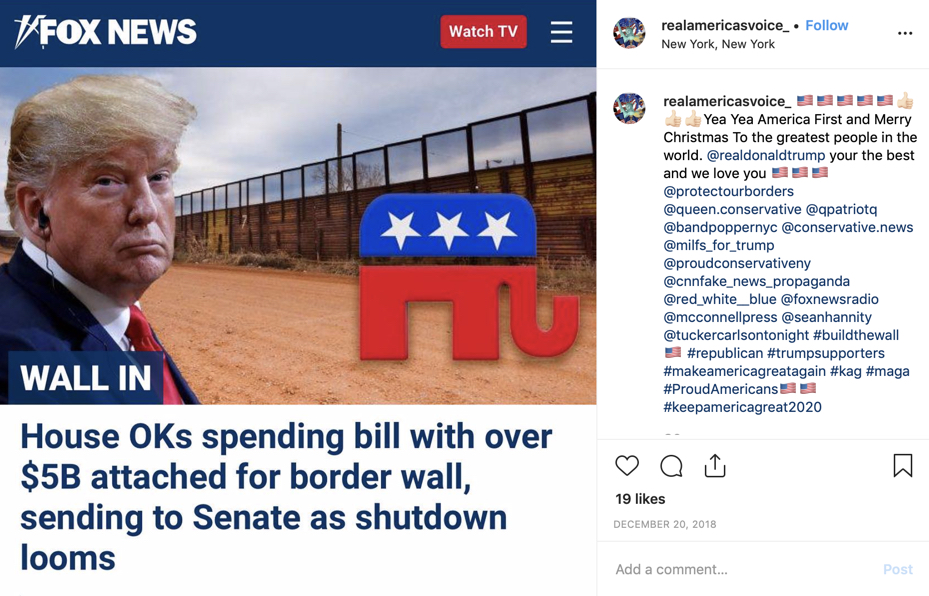 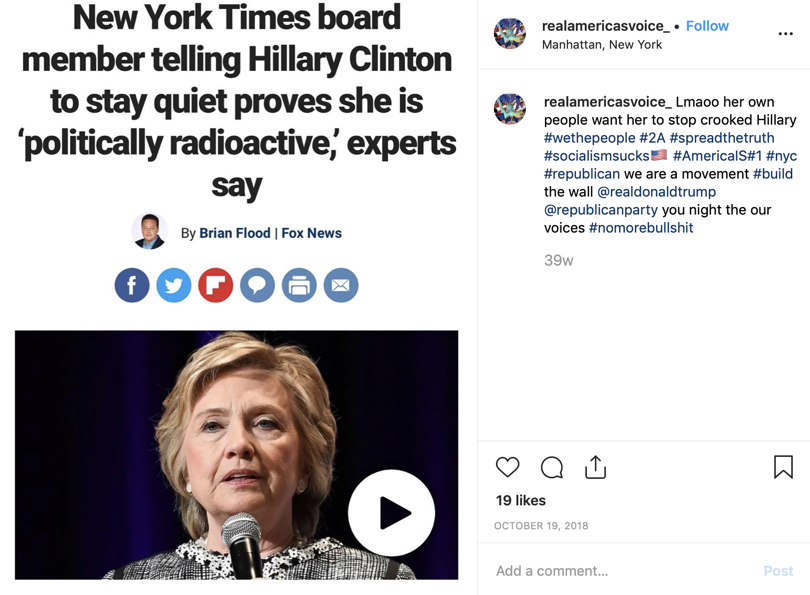 Other right-wing media figures and outlets promoted by Comello include Fox News contributor Sara Carter, cartoonist Ben Garrison (who was recently invited and then disinvited to the White House), One America News Network, Jim Hoft, and Turning Point USA.