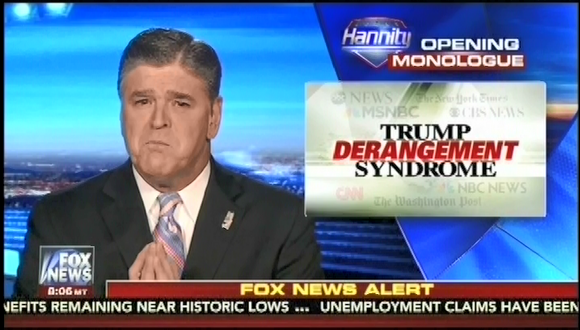 Fox News host Sean Hannity blasted the media for questioning President Donald Trump’s fitness for office as some outlets are discussing the president’s mental health. During the 2016 presidential campaign, however, Hannity repeatedly pushed conspiracy theories about Hillary Clinton's health and attempted to diagnose her with a slew of medical conditions.

Following Trump's August 22 campaign rally in Phoenix, AZ, during which the president went on a 20-minute diatribe attacking the media and attempted to defend his response to white supremacist violence that killed counterprotester Heather Heyer in Charlottesville, VA, some media figures have questioned whether Trump is mentally fit to be president. Hannity criticized the conversations surrounding Trump’s mental health on the August 24 edition of his Fox News show, calling it a “fake news talking point” and arguing that the media “wants to pretend to be psychology experts” without the medical training:

SEAN HANNITY (HOST): The destroy-Trump media, they are continuing their meltdown over President Trump. They are now pushing a new conspiracy theory about our commander in chief. They want you to think he's crazy.

Let's see media, pot, kettle. Now, since the biased press wants to pretend to be psychology experts, well, we’re going to beat them at their own game. We will diagnose all of these overpaid, out-of-touch, lazy leftist ideologues that are suffering from Trump-derangement syndrome.

Plus we'll continue to do the job the media should be doing. And that's telling you the truth about the Trump presidency. You will get this nowhere else on cable. Tonight's opening monologue.

All right, so the conspiracy theorists over at CNN, MSNBC, mainstream media, they’re at it again. Now after failed attempts to smear President Trump with cries of Russia, Russia, Russia, Russia, Russia, after claiming the president is about to start a nuclear war with North Korea, and after falsely painting the president, conservatives, Republicans as racist, racist, racist bigots, well, now, the leftist hacks have created a fake news new talking point that they want to spread around in their new echo chamber. Now members of the media elite, they know it all. And media are now pretending to be experts in psychiatry and psychology. And they have found a brand-new way to try to delegitimize and destroy President Donald Trump. They are now claiming he is unhinged. He's unfit to serve.

During the 2016 presidential campaign, however, Hannity was one of the leading voices in right-wing media who regularly pushed unfounded allegations that Hillary Clinton suffered from a number of diseases and ailments that made her unfit for the presidency. Hannity devoted entire segments of his show to pushing the conspiracy theory that Clinton “could be experiencing a serious undiagnosed medical condition.” He also claimed Clinton had suffered a stroke and said she had Parkinson’s disease. At one point, Hannity even invited medical doctors on his prime-time show in hopes they'd agree with his diagnosis that Clinton suffered from seizures. Those medical professionals, however, were unconvinced of his claims.