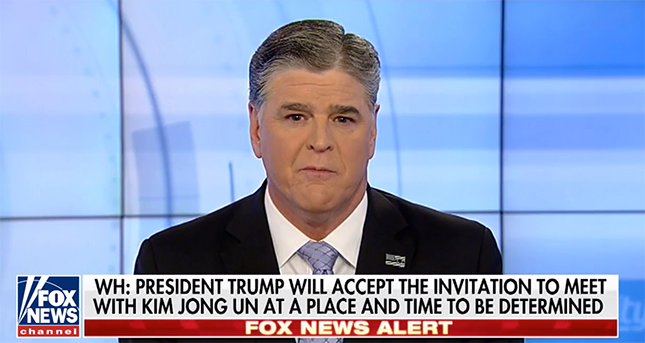 Many Fox News employees are ecstatic over the news that President Donald Trump has agreed to meet with North Korean dictator Kim Jong Un. The Nobel Peace Prize has been mentioned on at least four different Fox shows already. But none on Fox have been as effusive in their praise as host Sean Hannity -- who attacked former President Barack Obama for being open to meeting with North Korea’s leader a decade ago.

The announcement of the meeting came unexpectedly outside of the White House on March 8, delivered by South Korean national security adviser Chung Eui-Yong instead of the Trump administration. Kim had reportedly told the South Koreans -- who then informed Trump -- of his desire to talk with the president. The White House confirmed Trump would accept the invitation to meet, but stated that “at this point, we’re not even talking about negotiations.”

Hannity wasted no time in congratulating Trump for the news. At the opening of his show, Hannity said: “Huge breaking news tonight: President Trump scoring a big win and possibly averting a major global nuclear crisis tonight with North Korea.” After Fox White House correspondent John Roberts explained the news, Hannity called it a “historic day by any measure.”

Then, while discussing the news with two guests, Hannity grandly opined on the “philosophy” behind Trump’s actions, saying that the “one consistent thing that we see as we look through history is that capitulation and appeasement never works. Peace through strength -- it's not just a slogan; it is a philosophy. And the only way to get respect is to stand strong in the face of tyranny.”

But Hannity still wasn’t done. Halfway through the show, he delivered a nine-minute monologue in which he praised Trump even more enthusiastically and dinged Obama for failing to make “little rocket man ... back down.”

However, Hannity had a much different take a decade ago, when Obama was asked during a July 2007 presidential primary debate whether he would meet “separately, without precondition, … with the leaders of Iran, Syria, Venezuela, Cuba, and North Korea, in order to bridge the gap that divides our countries?” Obama replied, “I would.”

Nexis transcripts reveal that Hannity didn’t like the notion of a president meeting with the leader of North Korea back then.

During the May 15, 2008, edition of his Fox News show, Hannity referenced Obama’s answer and asked former House Speaker Newt Gingrich: “After Hitler invaded Poland in 1939, before we were at war with Nazi Germany, do you think it would be wise -- would have it been wise for us to engage in talks with him?” Later during the same show, Hannity asked former Republican Rep. Jack Kemp (R-N.Y.) the same thing: “After the Nazis invaded Poland, before we were at war with them, is it fair to ask the question, ‘Would you have met with Hitler in 1939?’ Would that be fair in this campaign to get a perspective of where he's coming from, with the Obama doctrine?”

On October 26, 2008, Hannity returned to Obama’s reply, calling it “one of the most disturbing displays of Obama’s lack of foreign policy expertise.” He then suggested that Obama would be “the new Jimmy Carter.”

SEAN HANNITY: President Obama promised on the campaign trail to engage our adversaries without preconditions. Well, America, in that spirit the president has a new pen pal, North Korean dictator Kim Jong Il.

Now, according to The Washington Post, the president wrote Mr. Kim a secret letter that was delivered last week to the communist dictator by the administration's special envoy to North Korea.

Now, the contents of the letter, however, remain a mystery. Continuing its proud tradition of transparency, the White House had this to say, quote, “We do not comment on private diplomatic correspondence.”

I can only imagine that the president's dialogue with Mr. Kim will be just as fruitful as his exchanges with the Iranian president, Mahmoud Ahmadinejad.

Of course, it’s well known by now that Hannity is nothing more than a pathetic Trump shill. He obsesses over narratives from the right-wing fever swamps that he fervently and mistakenly believes undermine special counsel Robert Mueller’s probe. When there’s news about that investigation, Hannity does his best to avoid mentioning or to downplay updates that bode ill for Trump. And let’s not forget that he exploited the tragic murder of Democratic staffer Seth Rich in an effort to shield Trump.

It remains to be seen whether Hannity will tone down his enthusiasm now that the White House has downplayed the possibility that the meeting will actually occur. Press secretary Sarah Sanders enumerated preconditions today, saying the meeting “won’t take place without concrete actions that match the promises that have been made by North Korea,” but the White House later said the “invitation has been extended and accepted, and that stands.”