In the real world, international leaders are responding to Russia's invasion of Ukraine by condemning Russian President Vladimir Putin and imposing economic sanctions against his regime for its wanton and unprovoked act of conquest.

In the right-wing media echo chamber, however, the fault for this invasion lies with a mind-boggling variety of scapegoats, including President Joe Biden, Rep. Alexandria Ocasio-Cortez (D-NY), American environmentalists, the LGBTQ community, and even the team here at Media Matters for America — anybody, that is, other than Putin.

Rather than blame the actual aggressor for attacking his weaker neighbor, right-wing media pinned the blame on Biden for supposedly projecting weakness and vulnerability to Putin. In fact, Biden has coordinated much of the international diplomatic response of severe economic sanctions against Russia. But at every step, right-wing commentators keep declaring that Putin is the one who represents the kind of strong leader they would actually prefer.

Fox News has painted an alternate reality in which Trump would have opposed Putin’s aggression if he were still president — just as Fox and other right-wing media previously worked to cover up Trump’s friendly relationship with Putin when Trump was in office. Trump is now publicly defending Putin’s attack on Ukraine and praising its supposed “genius.” And in the midst of this environment, it has also just been revealed that Trump had privately planned for the U.S. to leave NATO if he had won a second term, a move that would have essentially ended America’s position as a leading world power and potentially invited far worse aggression from Russia than we’ve already seen.

Fox News has pushed a major line of propaganda alleging that the Biden administration’s withdrawal from Afghanistan demonstrated weakness on the world stage and invited Putin to take advantage.

There are, however, a number of problems with such a claim. First of all, Putin began troop build-up in early March 2021, a month prior to Biden’s announcement of the U.S. withdrawal from Afghanistan, which was not completed until August. Second, it was Trump, a Putin ally, who first negotiated a withdrawal agreement from Afghanistan; the Biden administration postponed Trump’s original abbreviated withdrawal timeline in an effort to make it less chaotic.

Right-wing media figures are also saying that the Biden administration is to blame for Russian aggression because it halted the construction of the Keystone XL pipeline from Canada. The attempted reasoning here is that the decision increased the importance of Russia’s oil supplies in the world market, further emboldening Putin.

Again, there are obvious problems with this argument. First off, Keystone XL was a proposed expansion of an already existing pipeline system, so it’s not as if oil isn’t flowing around North America right now. Furthermore, if Putin really believed that a scarcity of energy supplies would have deterred western sanctions on Russia, then he would have been wrong — as Germany has already canceled the Nord Stream 2 gas pipeline, in response to Putin’s assault against Ukraine. (Fox’s Tucker Carlson, in turn, attacked the Nord Stream 2 cancellation as part of an alleged Biden administration conspiracy to raise energy prices on Americans to benefit Democratic donors.) 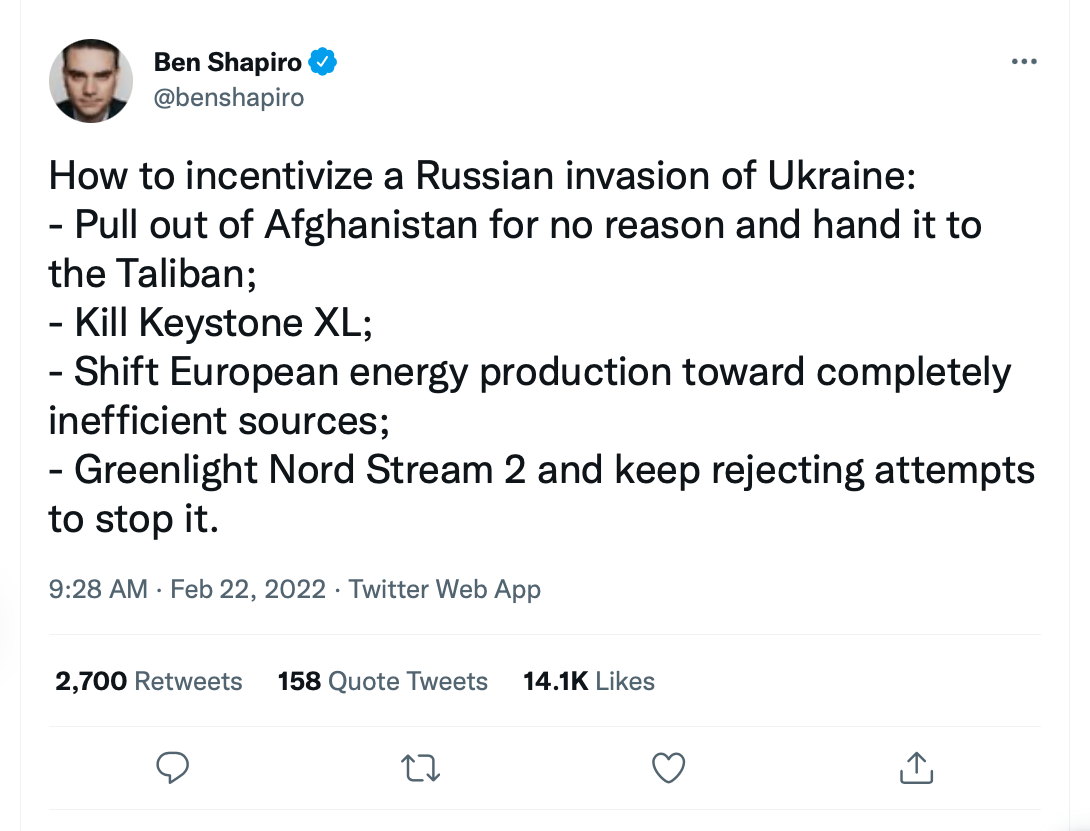 The false arguments about the Keystone XL pipeline also extend to a round of personal attacks on Rep. Alexandria Ocasio-Cortez (D-NY) and the Green New Deal proposals to transition away from a fossil fuel economy, with right-wing media figures arguing that the real effect has been to shut down America’s energy production and make the West more dependent on foreign fossil fuel producers, such as Russia.

Of course, the Green New Deal has not been enacted, so none of its purported effects are happening. The situation is reminiscent of previous false coverage blaming the 2021 Texas blackouts on the Green New Deal, only now they’re pushing the spin on a global scale.

Right-wing media voices have also taken to attacking Vice President Kamala Harris, picking up with the sexist attacks that commenced with her selection as Biden’s running mate and continued through the general election.

Right-wing media suggest American focus on diversity, equity, and inclusion (and vaccines, too) made the country weak

Right-wing media are also claiming that America has been weakened by a “woke” culture that supports such ideas as racial equality, LGBT rights, and feminism while promoting Putin and Russia as the opposite.