Sunday morning political shows discussed climate change much more in February than they did in January. Sen. Sheldon Whitehouse (D-RI), who is calling on the programs to give climate change more attention, released a scorecard on the shows' February performance: 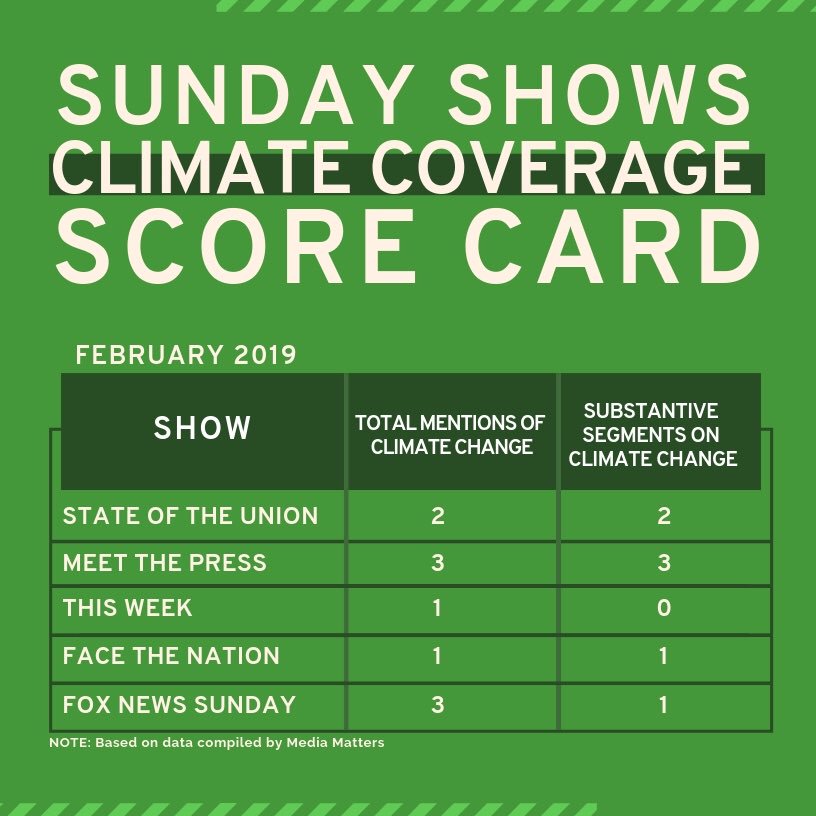 It indicates a notable increase in climate coverage compared with the first month of the year, when none of the shows aired substantive segments on climate change and altogether they made just four passing mentions of the topic.

Most of the coverage in February focused on the Green New Deal resolution that Rep. Alexandria Ocasio-Cortez (D-NY) and Sen. Ed Markey (D-MA) introduced on February 7. While it was encouraging to see more media attention on climate policy ideas, the discussions tended to be narrowly focused on the potential political ramifications for Democrats and Republicans instead of whether the Green New Deal contains worthy ideas for addressing climate change.

On a more discouraging note, some of the Sunday show discussions about the Green New Deal included climate deniers -- most notably right-wing radio host Rush Limbaugh, who appeared on Fox News Sunday on February 17. During a wide-ranging conversation, Limbaugh called climate change a “hoax” after host Chris Wallace brought up the Green New Deal. Limbaugh went on, “There's no evidence for it. Climate change is nothing but a bunch of computer models that attempt to tell us what's going to happen in 50 years or 30.” Wallace did not push back against Limbaugh's outright climate denial. This was the lowlight of February's climate coverage.

Other people who have denied or downplayed the climate threat were also asked about the Green New Deal on the Sunday shows. On the February 10 edition of Fox News Sunday, Wallace raised the topic with National Review Editor Rich Lowry and with acting White House Chief of Staff Mick Mulvaney. And on February 10 on ABC’s This Week, host George Stephanopoulos brought up the Green New Deal with former New Jersey governor and ABC contributor Chris Christie. None of them expressed climate denial in these conversations, but Lowry used the opportunity to criticize the Green New Deal as “socialist” and “radical” and Mulvaney expressed delight that the plan is dividing Democrats.

More insightful climate coverage included a segment on the February 24 episode of CBS’ Face the Nation during which Washington Gov. Jay Inslee, a Democratic presidential hopeful, called for action to fight the climate emergency. Additionally, a panel discussion on the February 10 episode of NBC’s Meet the Press included MSNBC host Katy Tur offering a vivid reminder that climate change could kill millions of people and cause billions of dollars in economic damages. (Actually, it could cause trillions in damages.)

But the highlight of the month's climate coverage came from a panel discussion on NBC’s Meet the Press on February 24, when Heather McGhee, former president and current senior fellow at the liberal policy group Demos, injected a passionate call for climate action into what was otherwise shaping up to be a typical, insubstantial conversation about Green New Deal politics. The panel was discussing the tactics behind a viral video that showed Sen. Dianne Feinstein’s (D-CA) condescending to young activists from the Sunrise Movement who were pressing her to support the Green New Deal. McGhee reminded the others of the big picture and the urgent need for action:

Dianne Feinstein has been great. And she has been in office and not had the urgency that is required. This is an emergency in this country. It's an emergency on this planet. There's no higher responsibility of anyone who has any kind of political power right now than to try to stop a global catastrophe that's not happening in three generations, it's happening now.

McGhee came close to tears during her comments, as she noted afterward on Twitter:

This morning I got choked up on air when discussing the political reluctance to be bold on climate change. It’s never happened to me before, but there’s no precedent for the threat we are facing. https://t.co/LXQrm6YhlV

She then followed up by writing a piece invoking her infant son and explaining that “we need more emotion and more urgency in the fight for the future.”

In 2018, the Sunday shows hardly covered climate change at all, and when they did, those discussions too often featured climate deniers. Now -- after the release late last year of landmark climate reports from the United Nations and the U.S. government and the introduction this year of the Green New Deal resolution -- the programs are addressing climate change more often, and at least some of the coverage is constructive. We hope to be seeing a lot more.