First Lady Michelle Obama is in the midst of a nationwide anti-obesity campaign aimed at shrinking America's collectively expanding waistline. The conservative media are striking back against Mrs. Obama's message of fitness and nutrition by decrying what they see as government intrusion into our pantries.

At least, that's what they're doing when they're not calling Michelle Obama fat.

Rush Limbaugh's long been laying the groundwork for this sexist attack, using stories about the First Lady's nutrition programs to call the fitness-fanatic Mrs. Obama “Michelle, My Butt.” (The jab's lack of sense it exceeded only by its lack of self-awareness.) 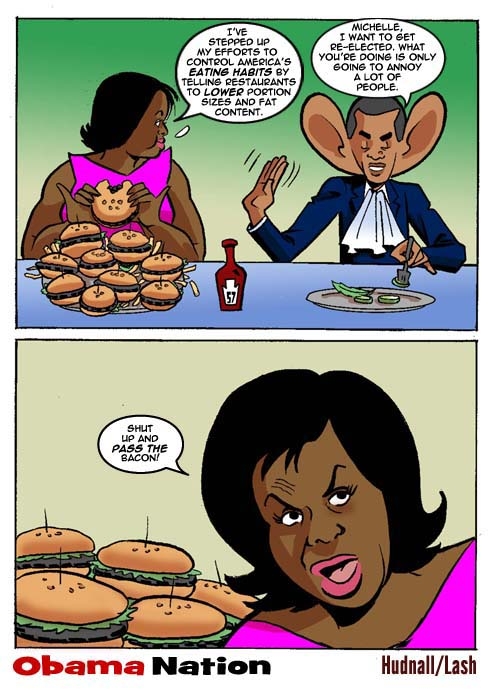 If there's a “joke” in there, I'm missing it. Notably, the version of the cartoon online now differs slightly -- but significantly -- from the version that showed up in my RSS reader, in which the First Lady demands: “Shut up and pass the lard!”

It's been a long time since I've expected anything approaching comity from the conservative media, but this is the sort of stuff most of us left at the grade school playground.