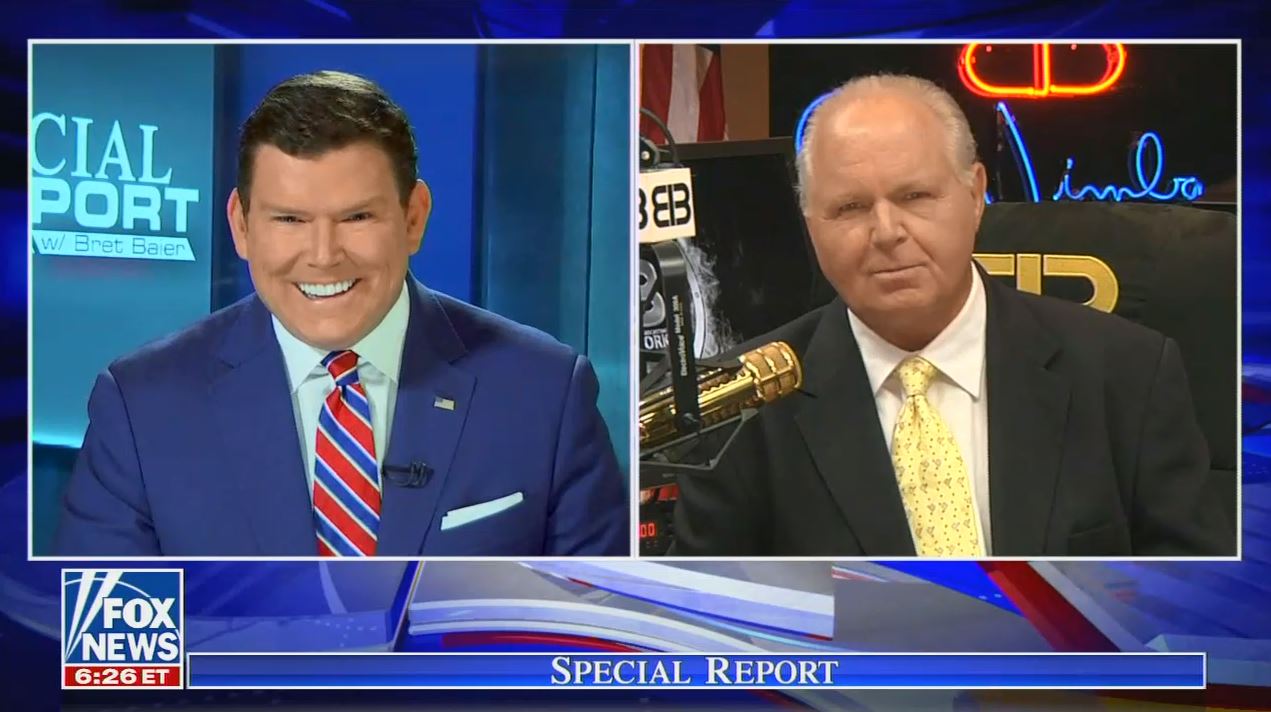 Media Matters analyzed Nexis transcripts from January 1, 2013, to August 1, 2019, and found a dramatic increase: While he rarely appeared on the network in prior years, this year Limbaugh has made eight appearances on various Fox news and opinion shows, including a scheduled August 1 appearance on Sean Hannity’s show.

By contrast, Limbaugh appeared on Fox a total of three times in all of 2018 and only two times in 2017, including one interview with Hannity that aired over two nights. Before President Donald Trump took office, Limbaugh appeared on Fox only one time each in 2015 and 2016; in 2014 he made only two appearances on Fox programs. In 2013, he made two appearances as well as calling in to Fox & Friends.

In 2019, Limbaugh is appearing on both Fox News opinion programs and the network’s “straight news” programming. Just days ago, Limbaugh assured Fox & Friends that Trump is not a racist. Earlier this month, he told the program that Democrats are conspiring to rig elections.

Fox’s supposed “news”-side programs have also let Limbaugh peddle conspiracy theories and other wild claims without question. In April, Limbaugh said Hillary Clinton should be investigated, indicted, and put in jail, and he used a racial slur when discussing Sen. Elizabeth Warren (D-MA) with Fox “straight news” anchor Martha MacCallum. In March, days after Limbaugh suggested that the New Zealand mass shooting might have been a false flag done to smear conservatives, he appeared on Special Report with Bret Baier. Baier did not ask about Limbaugh’s remarks.

Bret Baier did not really challenge a single thing Rush Limbaugh said during a 7.5 minute interview on his straight-news show last night. Limbaugh called Mueller's investigation a “manufactured coup” and said “the mainstream media” should be investigated. https://t.co/HftPbARszP pic.twitter.com/cXjB0KUMay

Limbaugh has a decades-long history of sexism and misogyny, including calling then-13-year-old Chelsea Clinton a “dog” and claiming feminism “was established to allow unattractive women easier access to the mainstream.” Limbaugh also has a history of racism, often using coded language and other dog whistles that became more explicit after the election of President Barack Obama. Recently, Limbaugh has called Rep. Alexandria Ocasio-Cortez (D-NY) “some young uppity,” warned that the U.S. will become “undermined from within” by immigrants, and said that Obama and Sen. Kamala Harris (D-CA) are not African Americans and Rep. Rashida Tlaib (D-MI) is not a person of color.

Limbaugh’s racism, sexism, and bigotry have taken a toll on his radio show; in recent years, he has become toxic to advertisers, especially after he called then-law student Sandra Fluke a “slut” and a “prostitute” for testifying before Congress about women’s health care. Limbaugh’s remarks led advertisers to shy away from right-wing radio as a whole. .

While right-wing radio has struggled, the Republican Party has effectively merged with Fox News. Even though Limbaugh has his own connection to Trump, appearing on Fox can boost him within the right-wing bubble -- something he didn’t have to worry about just a few years ago.