The federal government has alleged that four Georgia militia members who are accused of plotting to kill federal employees modeled their plan on right-wing blogger Mike Vanderboegh's online novel Absolved, which depicts underground militia fighters who declare war on the federal government over gun control laws and same-sex marriage, leading to a second American revolution. Vanderboegh is not alone in promoting such insurrectionism: several right-wing media figures, including other gun rights bloggers, have suggested the possibility of political violence or revolution as a means of responding to progressive policies.

Federal officials say that the four Georgia militia members who were arrested this week for allegedly plotting a violent terror attack were inspired by a novel their ringleader read on the Internet.

Now attention is turning to the author of that novel, Mike Vanderboegh, a blogger=- and former militia member from Pinson, Ala., who is no stranger to controversy.

The Associated Press reports that terror suspect Frederick Thomas, 73, was moved by Vanderboegh's novel, “Absolved,” about a violent conflagration between militia members and the government.

In his introduction to the book, Vanderboegh describes it as a “useful dire warning,” a book that is “as much a cautionary tale for the out-of-control gun cops of the ATF as anyone. For that warning to be credible, I must also present what amounts to a combination field manual, technical manual and call to arms for my beloved gunnies of the armed citizenry. They need to know how powerful they could truly be if they were pushed into a corner.”

During protests over federal health care reform legislation, Vanderboegh suggested throwing bricks through the windows of Democratic Party headquarters. The AP notes that a number of such incidents occurred. [Los Angeles Times, 11/3/2011]

Bob Owens: “Go To Your Congressman's Office... If You're Willing To Do The Time For The Crime, Have A Swing At Him.” In a March 24, 2010 post on his blog, PJ Media (formerly Pajamas Media) contributor Bob Owens suggested that assaulting members of Congress was an acceptable form of protest:

No matter what you think of Obamacare and the craven ideologues that passed it, is totally unacceptable to threaten their relatives or friends and put them in danger.

Go to your Congressman's office and scream at him in the most colorful language possible. Hang him in effigy at protests. If you're willing to do the time for the crime, have a swing at him.

Better yet, throw a shoe... after all, the left values such behavior as a form of “vigorous dissent,” and will no doubt ask for any charges against you to be dropped.

Perhaps one day stronger action will be required if Progressives continue to trample on our liberties in their blind quest for power. But that time is not now. [Confederate Yankee, 4/24/2010]

They have won in a bloodless coup.

Whether they actually win or not depends upon how much you love your family and your nation and the principles that made this nation great. Our founders themselves believed in the right of revolt, and knew better than any of us that governments must be replaced from time to time. They were wise enough to provide us with a constitutional framework that will outlast any government, including this one. We can dispose of this government, and restore the Constitution that has served us and the rest of the world so well for so long.

We stand at the brink.

The question for you, my fellow Americans, is simple.

Will you fight, or will you surrender your liberties?

I pray for peace.

Bob Owens On Media Matters Employees: “I Hope They Do Feel Threatened.” In an August 3, 2010, blog post titled “Closer to Midnight,” Owens suggested political allies conduct a “serious review of our capacity for violence” and wrote that he hoped Media Matters employees “feel threatened”:

Propagandists for the elitists at Media Matters seem troubled by A Nation on the Edge of Revolt [an Owens blog post]. They portray it as a threat when “Conservative media figures openly discuss armed revolution.”

I have not yet been swayed to the point of view that an armed conflict is inevitable, TN_NamVolunteer. But we are close enough that one would be wise to prepare for a possible conflict, just as one would prepare for any coming storm. [Confederate Yankee, 8/3/2010]

I hope they do feel threatened. Attempts at peaceable protests have been met at turns by feigned ignorance, then mockery, then attacks on the character and motives of those would not sit quietly by. Perhaps it will take a serious review of our capacity for violence to get them to realize we shall not surrender our individual liberties to their lust for power.

The common theme here is that Feinstein, Waxman and others seem to have identified .50 caliber rifles as a personal threat to their own lives. This is a good thing. Those who take it upon themselves to write the laws by which the rest of us must live should fear the wrath of the people they seek to govern. For the nation to be truly free, those who seek to exceed the limits on their power imposed by the Constitution must be made to live in mortal terror of the consequences. [Examiner.com, 11/3/2011]

Glenn Beck: “You'd Pick Up A Gun? Have You Ever Thought Of That?” After saying that “violence is just the wrong way to go,” during a March 23 episode of the his television show, Beck asked his audience if they had ever considered picking up a gun, then warned that progressives have done so:

You'd pick up a gun? Have you ever thought of that?

These people [points to images of progressive figures] have. Because possibly, maybe the question should be asked, maybe they're tired of evolution, and maybe they are waiting for revolution. [Fox News, Glenn Beck, 3/23/10]

Beck: “You're Going To Have To Shoot Them In The Head.” Discussing what he called a “civil war in the Democratic party” Beck claimed that “radicals have infected the party” and “have been brought in by politicians who don't really care about anything.” Beck purported to illustrate his argument by airing comments made by former White House advisor Van Jones. After then discussing Iranian president Mahmoud Ahmadinejad and Ayatollah Khomeini of Iran, Beck said:

Just because you in Washington and you who are so out of touch with life in the media, just because you don't believe in anything doesn't mean nobody else does. We do. You know why you're confused by this show? It's because I believe in something. You don't.

I will stand against you and so will millions of others. We believe in something. You in the media and most in Washington don't. The radicals that you and Washington have co-opted and brought in wearing sheep's clothing -- change the pose. You will get the ends.

You've been using them? They believe in communism. They believe and have called for a revolution. You're going to have to shoot them in the head. But warning, they may shoot you.

They are dangerous because they believe. Karl Marx is their George Washington. You will never change their mind. And if they feel you have lied to them -- they're revolutionaries. Nancy Pelosi, those are the people you should be worried about. [Fox News, Glenn Beck,6/9/10]

Listen to Beck explain his comments 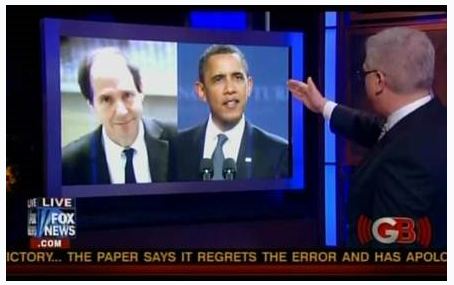 Listen to Beck explain the incident

Erick Erickson Suggested He Might Pull A “Shotgun” On Census Worker. During his radio show on April 1, 2010, CNN contributor and Redstate.com managing editor Erickson suggested he might “pull out my wife's shotgun” in response to a census worker asking him questions:

What gives the Commerce Department the right to ask me how often I flush my toilet? Or about going to work? I'm not filling out this form. I dare them to try and come throw me in jail. I dare them to. Pull out my wife's shotgun and see how that little ACS twerp likes being scared at the door. They're not going on my property. They can't do that. They don't have the legal right, and yet they're trying. [WMAC, In the Morning with Erick Erickson, 4/1/2010]

Erick Erickson: “At What Point Do The People ... March Down To Their State Legislator's House, Pull Him Outside, And Beat Him To A Bloody Pulp?” On April 31, 2009, writing on RedState.com about a Washington county's ban on certain kinds of dishwasher detergent, Erickson asked when people were approaching the point where they would “beat” state legislators to “a bloody pulp for being an idiot”:

At what point do the people tell the politicians to go to hell? At what point do they get off the couch, march down to their state legislator's house, pull him outside, and beat him to a bloody pulp for being an idiot? [Redstate.com 4/31/2009]

Bob Owens: “Jackasses” Who Call Health Care A Right “Deserve To Be Drawn And Quartered.” From his' Twitter account:

Well, if the Bureau of Alcohol, Tobacco and Firearms comes to disarm you and they are bearing arms, resist them with arms. Go for a head shot; they're going to be wearing bulletproof vests. [CBS Morning News, 4/26/95, via Nexis]

Jim Quinn: “Our Country Was Built On Revolution, And It's About Time We Took It Back.” On September 10, 2009, during a discussion on health care reform, right-wing radio host Jim Quinn said:

Our country was built on revolution and it's about time we took it back. These people are dangerous [...]

“It's about time to put an end to this leftist control of this country, and if a revolution is what it takes, damn it, then that's what it's going to take, because liberty will not be denied.” [The War Room with Quinn and Rose, 9/10/09]

How much more will Americans take? When will enough be enough? And, when that time comes, will our leaders finally listen or will history need to record a second American Revolution? We the people have the authority according to America's Declaration of Independence. [WorldNetDaily, 4/9/2009]

Pam Geller: Obama “Is Itching For A Civil War. And At The Rate He Is Going, He Is Going To Get One.” In a June 23, 2010 post about immigration reform titled, “Forecast: Blood on the Streets,” conservative blogger Pam Geller wrote:

If the king decrees that all illegals will be granted amnesty, I can assure you that America will not go quietly. [....]

It is increasingly clear that the most divisive President in history is itching for a civil war. And at the rate he is going, he is going to get one. [Atlas Shrugs 6/23/2010]