Right-wing and far-right media outlets and figures are falsely claiming that Beverly Young Nelson, who has accused Alabama Republican Senate candidate Roy Moore of sexually assaulting her when she was 16, admitted that she forged a high school yearbook that contains Moore’s signature. Nelson actually said she added some notes next to the signature, but that it was Moore’s signature.

Moore accuser reports she has Moore’s signature in her yearbook

Woman who says Moore sexually assualted her has Moore’s signature in her yearbook. Beverly Young Nelson accused Moore of “sexually assaulting her when she was 16,” according to The New York Times. The Times noted that her attorney “displayed a yearbook that Ms. Nelson said had been signed by Mr. Moore, and the writing mirrored other examples of Mr. Moore’s signature.” From the November 13 article:

An Alabama woman accused Roy S. Moore on Monday of sexually assaulting her when she was 16, the fifth and most brutal charge leveled against the Republican Senate candidate. Senate Republicans are now openly discussing not seating him or expelling him if he wins the Dec. 12 special election.

The new accuser, Beverly Young Nelson, told a packed news conference in New York that Mr. Moore attacked her when she was a teenager and he was a prosecutor in Etowah County, Ala. Ms. Nelson was represented at the news conference by Gloria Allred, a lawyer who has championed victims of sexual harassment.

She said that Mr. Moore warned her that “no one will believe you” if she told anyone about the encounter in his car.

Ms. Allred displayed a yearbook that Ms. Nelson said had been signed by Mr. Moore, and the writing mirrored other examples of Mr. Moore’s signature. [The New York Times, 11/13/17]

Nelson said in ABC interview that she added some notes below Moore’s signature but the signature is Moore’s. ABC’s Tom Llamas reported that Nelson told him “she did make notes to the inscription, but the message was all Roy Moore.” From the December 8 edition of ABC’s Good Morning America:

TOM LLAMAS: Young's proof that she knew Moore? Her yearbook with this inscription. But Moore and his supporters have called into question that inscription, noting the writing under the signature appears to be different.

JANET PORTER: Let's look at Beverly Nelson. Everybody knows her yearbook is a forgery.

LLAMAS: Nelson says she did make notes to the inscription, but the message was all Roy Moore. Beverly, he signed your yearbook?

LLAMAS: And you made some notes underneath?

The Gateway Pundit: “WE CALLED IT! Gloria Allred Accuser **ADMITS** She Tampered With Roy Moore’s Yearbook ‘Signature’.” Far-right blog The Gateway Pundit, which previously helped advance the conspiracy theory that the signature Nelson has was forged in the first place, falsely claimed in a headline that Nelson said she “tampered” with the signature in an article that called Nelson “nothing but a fame-seeking fraud.” Donald Trump Jr. subsequently shared the article on Twitter. From the December 8 article:

Big mistake. Nelson admitted on ABC’s “Good Morning America,” that she added “notes,” to what she claims is Moore’s signature inside her yearbook.

As The Gateway Pundit’s Jim Hoft reported, there are growing calls that Gloria Allred and Beverly Nelson should be charged with fraud.

And in case you missed it… The Gateway Pundit has previously posted on the several discrepancies with Beverly Nelson’s press conference.

Nelson admitting that she added to Moore’s alleged signature is the final nail in the coffin. Allred’s accuser is nothing but a fame-seeking fraud. [The Gateway Pundit, 12/8/17; Media Matters, 11/14/17; Twitter, 12/8/17]

Breitbart.com: “Bombshell: Roy Moore Accuser Beverly Nelson Admits She Forged Yearbook.” Breitbart’s John Nolte claimed Nelson’s interview was a “bombshell” and that no one could “believe anything she says after admitting to such a thing.” From the December 8 article:

Beverly Young Nelson has finally admitted that she forged a portion of the infamous high school yearbook that she and attorney Gloria Allred used as proof of her accusations against U.S. Senate candidate Roy Moore.

And in yet another blow to the credibility of ABC News, the disgraced, left-wing network downplayed the bombshell by presenting this admission of forgery as adding “notes” to the inscription. Worse still, the reporter actually coaches Nelson, puts words in her mouth, downplay the enormous significance of her deceit.

How can anyone believe anything she says after admitting to such a thing? Early reports are that Nelson and Allred will produce an expert to prove the rest of the yearbook is not a forgery. So a proven forger is bringing in her own expert. What an insult to the people of Alabama. [Breitbart, 12/8/17] 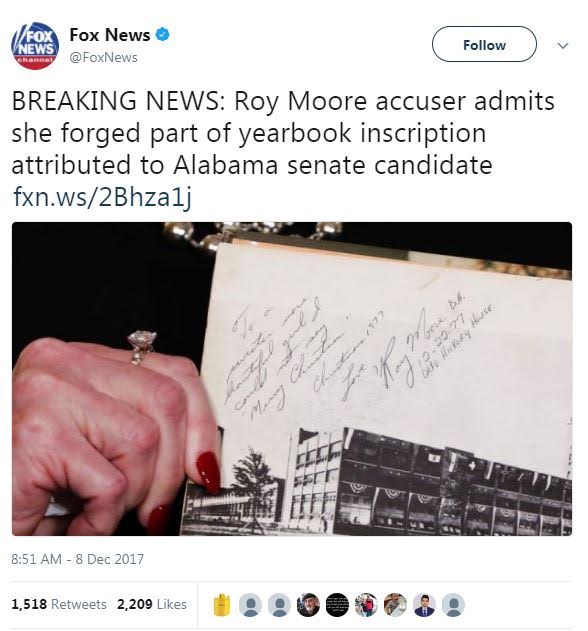 HARMEET DHILLON: What the president is doing here is trying to keep his promises to the American people, and that requires him to have a full slate of senators in the Senate to pass his agenda, and so while Roy Moore has issues that have been raised here, it’s the height of rich irony for Democrats to be throwing mud here after years of their behavior with Mr. Clinton and others who have had innumerable scandals, and all of a sudden now it’s #MeToo and we believe the victims. But today, one of his accusers, of Roy Moore, came out and admitted that she actually has forged part of the yearbook signature, so there’s all kinds of drama in this story, but ultimately, this is up to the Alabama voters and what’s right for them. [Fox News, Happening Now, 12/8/17]

LAWRENCE JONES: As a man, I feel very uncomfortable because I believe that there's a lot of allegations going out without due process. I think some of them warrant it after people make public statements, or some of the evidence is presented. But -- and we’re going to talk about this later in the show --when you have things like the Roy Moore case, which I was critical of the guy, and then the supposed victim says, “Hey, I forged the date in the yearbook,” that's problematic for me.

JESSICA TARLOV: Well she said she added the date. She didn't say she forged the note from Roy Moore.

TARLOV: I understand. I’m just saying we just need the complete picture of what happened there. [Fox News, Outnumbered, 12/8/17]

CNN in November - Calling yearbook a forgery is an “appalling defense.”

Far-right troll Jack Posobiec agreed with Dinesh D’Souza that the yearbook was “forged.”

Basically, Gloria Allred proved #RoyMoore right. The yearbook is forged. And it comes out a couple days before the election. Great work, hacks!

RUSH LIMBAUGH (HOST): Bombshell, ready for this? Roy Moore accuser Beverly Nelson admits that she forged the yearbook. You remember what the yearbook -- this is the Gloria Allred special. And now Beverly Nelson, who was one of Roy Moore's accusers from 40 years ago, has admitted she forged it. So she has no credibility. None at all. Gloria Allred still has not released the yearbook so that it can be forensically tested. I wonder why she hasn't. Now we know why, because the perp has admitted she forged it. Beverly Young Nelson has finally admitted she forged a portion of the infamous high [school] yearbook that she and attorney Gloria Allred used as proof of her accusations against Roy Moore. In yet another blow to the credibility of ABC News, the disgraced left-wing network downplayed this news by presenting this admission of forgery as adding notes to the inscription. [Premiere Radio Networks, The Rush Limbaugh Show, 12/8/17]