To hear conservative media tell it, the resignation of Mozilla CEO Brendan Eich following an outcry over Eich's support for the 2008 referendum that banned same-sex marriage in California is merely the latest sign that a new era of anti-conservative persecution has arrived. That narrative undergirds the right's campaign against LGBT equality and is essential to understanding conservative support for measures that would enshrine anti-LGBT discrimination into law.

On April 3, just two weeks into his tenure, Eich announced his decision to step down as Mozilla's CEO. The revelation that Eich had contributed $1,000 to the anti-marriage equality Proposition 8 campaign had triggered fierce criticism from Mozilla employees, companies like OkCupid, and gay rights activists. As Slate's Mark Joseph Stern noted, the campaign for Proposition 8 was about far more than a simple disagreement over the definition of marriage. Supporters ran stridently homophobic ads accusing gay people of wanting to turn children gay, “mess up” children by introducing gay marriage into the curriculum, and conceal the truth about marriage and reproduction.

The virulently anti-gay propaganda behind the Prop 8 campaign - and the measure's subsequent passage -served to compound the sense of vulnerability among the gay community, which faces discrimination in housing, healthcare, public accommodations, and earnings, and is disproportionately targeted by hate crimes. Given the vitriol that motivated the Prop 8 fight, many supporters of LGBT equality objected to Eich's appointment to Mozilla CEO.

In the right-wing universe, however, it's conservative Christians whose rights are under assault. While Eich's decision to resign was an example of the free market at work - precisely the solution many libertarians and conservatives have long prescribed for anti-gay bigotry - conservative media figures greeted his departure with cries of totalitarianism and bigotry, condemning the “intolerant” LGBT movement for its role in the controversy.

Rush Limbaugh wasted no time in comparing Eich's critics with Nazis, declaring on his April 4 program that "'[f]ascist' is probably the closest way" to describe them (emphasis added):

When it was discovered that Brendan Eich had donated a $100 [sic] to Proposition 8 four years ago, the literal... What is the proper name for people who engage in this kind of behavior?  “Fascist” is probably the closest way.  You can call 'em Nazis, but nevertheless they went into gear, and immediately Brendan Eich was described as “filled with hatred” and anti-gay bigotry all over the tech media. 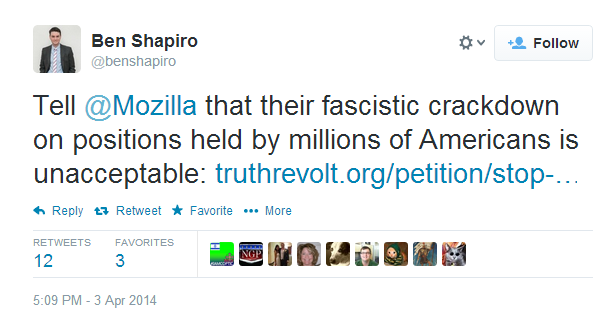 KRAUTHAMMER: One of the sound bites you said earlier, someone saying this is a kind of intolerance entering into the culture. I think it's narrower than this. This is the culture of the left not being satisfied with making an argument or even prevailing in an argument, but in destroying personally and marginalizing people who oppose it, in the same way that proponents of climate change declare the issue closed .It's over. There's no debate. It's settled. Therefore, anybody who is skeptical of that is considered anti-science and is called a denier, a conscious way to echo that there's some kind of moral or intellectual equivalent of a denier of the holocaust, in the same way people are now declaring the national debate we have had for a decade or two on gay marriage is closed, and anybody who opposes gay marriage is a bigot and should be written out of polite society, ostracized and lose their jobs. And I think Andrew Sullivan, who not only is a gay activist but is an intellectual father of gay marriage, he wrote a book proposing it 15 years ago or so when it was considered weird, and he's argued for the normalization of gay life. That's been his cause. He calls it disgusting. He's absolutely right. This is totalitarian. Discourse, and it shows a level of intolerance, it should be unacceptable, and people ought to be -- ought to get what they're giving out and feel a counter boycott. [emphasis added]

Meanwhile, Fox's Todd Starnes - a specialist in touting bogus culture war horror stories - wondered whether gay rights activists want a world in which opponents of equality are jailed or even executed:

Why not demand that those who oppose gay marriage relinquish the right to own property? Why not take away their right to vote? Why not take away their children? Why not just throw them in jail? Why not force them to work in chain gangs? Why not call for public floggings? Or better yet, let's just strap them down on gurneys, stick a needle in their arm and rid the world of these intolerant anti-gay bigots once and for all.

While Starnes blasted the gay rights movement for its “public floggings” of marriage equality opponents, he had no qualms about boycotting a popular New York City restaurant after its owners took a stance on behalf of LGBT equality.

At the notoriously pro-discrimination National Review, the editors decried the “ridiculous lynch mob” opposing Eich, predicting that "[t]he nation's full-time gay-rights professionals simply will not rest until a homogenous and stultifying monoculture is settled upon the land." “Goodbye to tolerance,” the magazine's John Fund lamented in a separate piece.

The Washington Times - a paper constantly on the guard against “militant homosexual activists” - was no less apoplectic. In an opinion column, Tea Party activist Judson Phillips compared Eich's critics with the Taliban, pointing to his departure as evidence that "[w]ith the far left, no dissent is allowed." (The debate isn't over whether one should be allowed to disagree with marriage equality. It's over whether a supporter of a notoriously homophobic campaign is the best person to lead a diverse workplace in the 21st century.) Characteristically oblivious to irony, the paper's editors inveighed against the “bigotry” of the gay rights movement. "[T]he bullies and mobs" criticizing Eich, the editors wrote, would be well advised “to take an aspirin and calm down.” In other words, stop taking centuries of discrimination and oppression so personally.

What makes the right's persecution narrative so pernicious isn't merely that, in the Eich affair, it whitewashes the hateful bigotry that fueled the Prop 8 campaign. While Eich's champions claim that they're simply trying to uphold a live-and-let-live ethos, there's a policy agenda attached to the larger narrative. Conservative media horror stories about the threat LGBT equality allegedly poses to religious liberty helped promote anti-gay segregation legislation like the recently-vetoed bill in Arizona.

Fox News wondered whether the U.S. could remain a "free country" if businesses had to treat LGBT customers equally, while the network's personalities depicted anti-discrimination measures as "reverse discrimination" targeted at people of faith - part of the network's long-running campaign to conflate homophobia and Christianity. But once the "potentially dangerous" policy implications of the right's religious liberty narrative became clear, many of those complicit in pushing the narrative recoiled.

Less than two months after the Arizona bill exposed the consequences of the right's baseless fear-mongering, conservative media figures are once again attacking the LGBT movement as a threat to conservatives and Christians.

How quickly they forget.