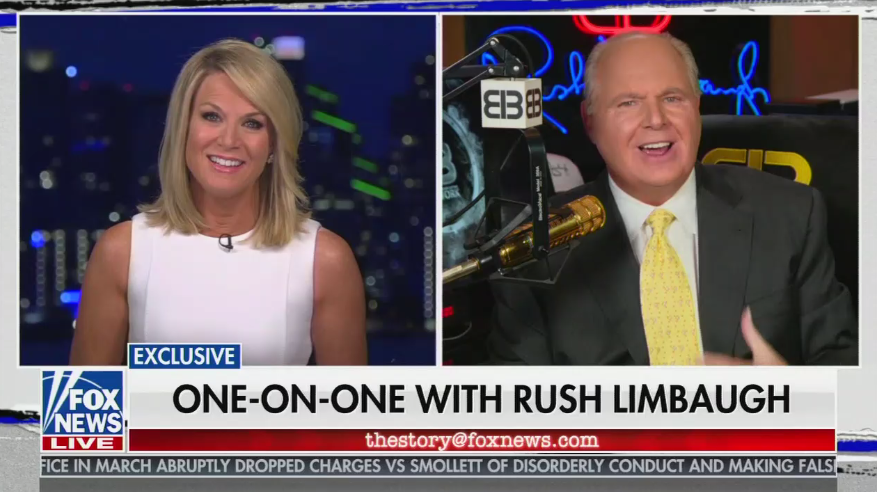 During the interview, Limbaugh claimed fomer Secretary of State Hillary Clinton should be investigated, indicted and put in jail. Limbaugh offered no evidence to back up this claim, and MacCallum did not ask for any. Limbaugh also used a racial slur to attack Sen. Elizabeth Warren (D-MA), and MacCallum again let the attack slide without mention. Limbaugh then claimed Democratic candidates do not have plans to pay for their policy proposals, another falsehood that MacCallum did not push back on.

While Fox News presents MacCallum as a “straight news” host, labeling her as a contrast to its problematic opinion hosts, she continually pushes right-wing misinformation and allows conservative guests to present falsehoods with minimal pushback. As Media Matters' Matt Gertz recently wrote, “MacCallum is every bit as pure an ideologue as anyone else on the network, using her show to claim that a border wall is 'needed' to stop the immigrant 'invasion' and declare that 'both sides' were at fault during the white nationalist rally in Charlottesville, VA, among other misdeeds.”

Fox's chief political anchor Bret Baier, whom Fox touts as being on the “straight news” side, recently interviewed Limbaugh with similar results -- even though it was days after Limbaugh had called the New Zealand shootings a false flag. Baier and MacCallum hosted Fox’s town hall with Sen. Bernie Sanders (I-VT).

Fox News is currently in an advertiser crisis and has been pushing “straight news” anchors like MacCallum and Baier as somehow distinct from its prime-time opinion programming. In reality, the two are cogs in the same machine -- as Rush Limbaugh himself just proved.