Fox Nation joined Rush Limbaugh in promoting a bogus link between support for same-sex marriage and the acceptance of pedophilia.

During the January 7 edition of his radio show, Limbaugh referenced a National Review Online (NRO) column, which criticized an article in The Guardian for highlighting the growing debate over whether pedophilia should be classified as a distinct sexual orientation.

Limbaugh - who has previously accused the “gay lobby” of trying to downplay cases of child molestation - attempted to link the growing acceptance of pedophilia to the campaign to legalize same-sex marriage:

LIMBAUGH: There is an effort underway to normalize pedophilia... I want to take you back. I want you to remember the first time, wherever you were, that you heard about gay marriage, and I want you to try to recall your reaction -- your first gut reaction -- when you heard that some activists or somebody was trying to promote the notion of gay marriage. What was your initial reaction? “Aw, come on. It'll never happen. That's silly. What are you talking about?” There is a movement on to normalize pedophilia, and I guarantee you your reaction to that is probably much the same as your reaction when you first heard about gay marriage. What has happened to gay marriage? It's become normal -- and in fact, with certain people in certain demographics it's the most important issue in terms of who they vote for. So don't pooh-pooh. There's a movement to normalize pedophilia. Don't pooh-pooh it. The people behind it are serious, and you know the left as well as I do. They glom onto something and they don't let go.

Now, there were people -- I just want to remind you -- back during the early days of the effort to redefine what a family is, and in the early days of the gay marriage activists, there were people who said, “Well, if this becomes mainstream, then someday marrying your dog is gonna be okay, and then having two husbands and two wives in one family is gonna be okay, 'cause who can say it isn't?”  There were others who predicted that pedophilia would be mainstream, and there was an outcry of opposition to this.

The same NRO column appeared on Fox Nation, along with an almost 14-minute clip from Limbaugh's radio show: 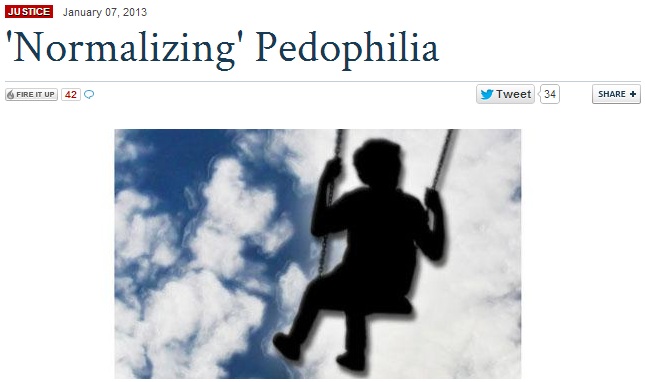 Fox has a history of attempting to tether pedophilia to LGBT equality. Fox's resident anti-LGBT pseudoscientist, Dr. Keith Ablow - who is a member of Fox News' “Medical A-Team” - has previously criticized the American Psychological Association (APA) for "caving into cultural pressure" to destigmatize homosexuality and pedophilia. And last August, Fox's Bill O'Reilly defended the right-wing smear that child molesters are more likely to be gay.

Fox's promotion of Limbaugh's comments is also surprising, considering that the network has previously supported the idea that pedophilia is a distinct sexual orientation. In a FoxNews.com article, Ablow warned that a person's sexual orientation could be shaped by environmental factors, such as men who become pedophiles after viewing sexualized images of children.